A lot of this was shot near the fire station I work at. Looking good Spokane!
Posted by EvilElf at 11:35 AM No comments:

My first brush with Sasquan was not as a participant. I was working Friday when a lot of conventioneers were already well into the fun. We responded to a call in the convention center where a fellow was not feeling well. Later on that night, we had a lady who was feeling the ill-effects of our smoky atmosphere. Downtown was hopping that day, and especially that night. The brownish air and the smell of smoke provided an apocalyptic off-world setting for the doings. Not a bad thing for a science fiction convention and overall partying downtown, but not so good for breathing. A frolicker at Zola's punched a sprinkler head around closing time, so we spent a long time there helping to get them back up and running. It was a day of a lot of calls and a busy night, as well.

Saturday, Sarah and I joined her siblings at the Pend Oreille county fair and had a great time. I was wiped out from the day before. A perfect fair frame of mind. Here's Sarah and her brother Steve. Steve has an encyclopedic knowledge of just about every car ever made. He'll let you know it too! An amazing guy. 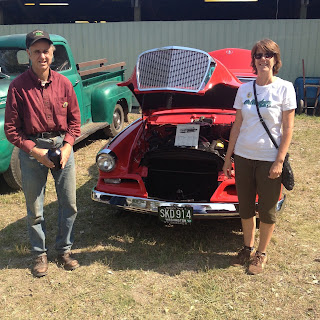 Here's an intersection at the fair. Watch out for traffic! 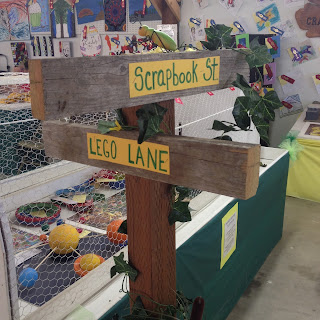 Sunday, with a good night of sleep under my hat, we went to the closing day of  Sasquan. 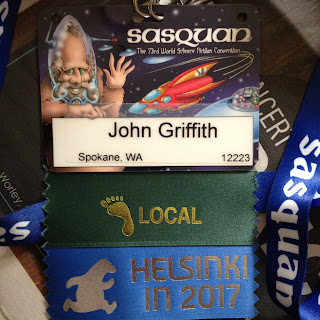 We had a blast. I wore a shirt promoting my 1997 novel Millennium Laxative as a joke that only I would appreciate. Sad, yet funny, I guess. 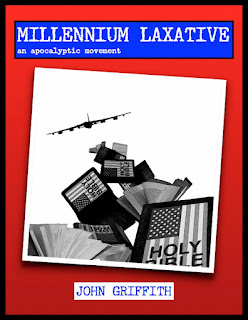 $40 seemed like a lot to get in. By the end of the day, I had had way more than $40 worth of fun. We hit three seminars. The first was a panel discussion on the health effects of global warming. It was a great talk. I thought I was up on most of the climate change information, but I learned a lot. The second presentation featured artists and directors from Z Nation. This was not very well-attended, but was very good. We heard a few spoilers for the next season and also learned of some new featured locales. This show uses Spokane and the neighboring countryside to chronicle the characters' departure from New York and their trip across the country. Spokane is such a great place to make movies and TV shows because of the variety of scenery and the great urban core. I was a big Walking Dead fan in the beginning, but after it became too melodramatic, I lost interest. Z Nation is a fun show and I like the comic book feel of the stories. The last presentation we attended was on creating your own web series. Instead of a panel, there was just one guy. He did a good job, and during his talk, I realized that I kind of have a web series with my little Haiku Friday dealio.

Sarah and I talked to artists and writers, as we made our way through the trade show. We tried on helmets and crowns. Why not? 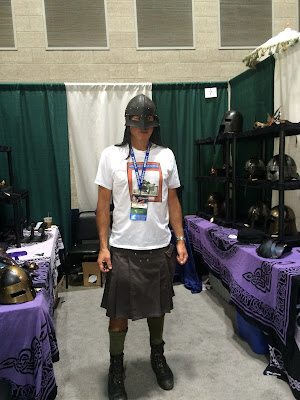 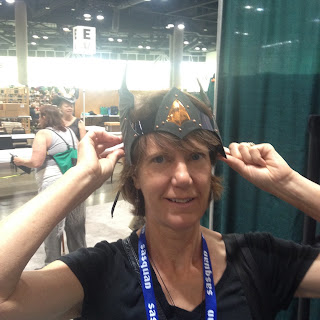 I admitted to one author that my knowledge of current science fiction writing probably peaked in 1974.

I was unfamiliar with Disc World, which seemed to be a crowd favorite at Sasquan!

I picked up a novel from a writer I struck up a conversation with. We purchased a t-shirt for our grandson. There was a vendor selling nothing but Red Dwarf stuff. I bought a DVD set from him and he, kindly, threw in another one for free. Plus, he showed us some articles, with pictures, of the ill-fated American rip-off of Red Dwarf. This was something I had heard of but had never seen anything about. Very cool!

Here I am posing with the costume of a space age Davey Crockett. Yeah! 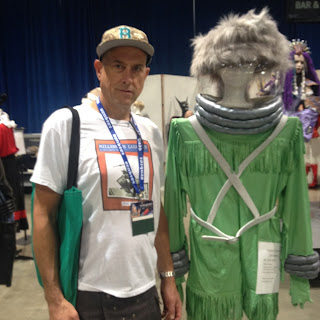 Sarah and I had lunch and a beer in the alien setting of a cantina. Folks were playing a game based on the artwork of John Picacio.  Mr. Picacio, himself was running the game. How very cool.

All in all, a great time, and I really enjoyed the fans who wore costumes and celebrated what they loved. 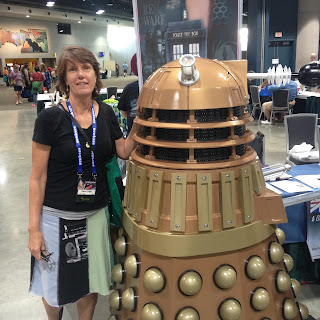 Personally, it  rekindled a lost time for me. From about fourth grade to eight grade, all I would read was science fiction. I bought Ray Bradbury paperbacks (and MAD magazines) from the grocery store with my lawn mowing money and plowed through them. A religious experience. When I started junior high, the library there was my refuge. Weirdly enough, it was well stocked with Kurt Vonnegut books and a lot of other novels that would probably be banned in today's new puritan movement. At Quimby Oaks Junior High School, the book baton was passed from Ray to Kurt and then on and on.

Today, I saw this article about Ray Bradbury. The FBI was keeping an eye on him! I could pick them even back then. Way to go Ray!

I was inspired by what I saw, heard and the people I met at Sasquan. I am doubling down on my own writing, which right now is a small book of poetry,  and I'm going to start reading more contemporary stuff!  Four contemporary science fictiony type books I have read lately are The Martian,  The Windup Girl, The Library on Mount Char and On Such a Full Sea. Any suggestions?
Posted by EvilElf at 1:46 PM 2 comments:

Do you like them boiled?
Brooklet peanut festival.
Nutty place to be. Joel

Spokane Engine One...
To the 'Mill as water flows,
Butterfly immersed. Kelly

"Let's make a movie. One second, twenty four frames. You, me, and our friends.” Steve

Confused bees ponder
Poppy boings from painted lawn
Nectar of the clowns - me
Posted by EvilElf at 6:25 AM No comments: 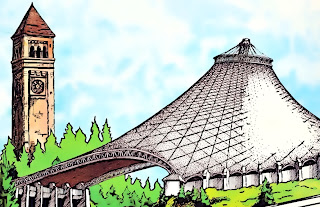 The grass is greener!

I painted a section of our lawn the other day. It's a part that is mostly dead weeds and dirt interspersed in ancient grass. I thought it would be funny to have the transformation take place while Sarah was away for a couple of hours. She noticed the next day and thought it was an improvement. So I painted the rest of the front lawn. It's like our grass has been sloppily replaced - a turf version of  Invasion of the Body Snatchers. I like it. 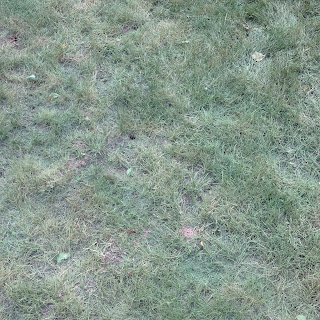 At $30 for a thousand square feet of coverage, it's kind of expensive. It's supposed to last for months. 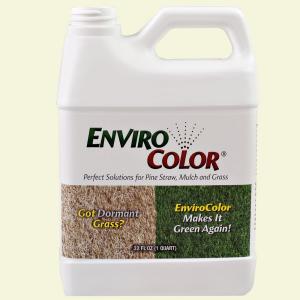 Next year, I might make my own version with some built-in turkey repellant.

My buddy Eric sent me this. I hope it adds a little zip to your day.
Posted by EvilElf at 8:27 AM 1 comment: