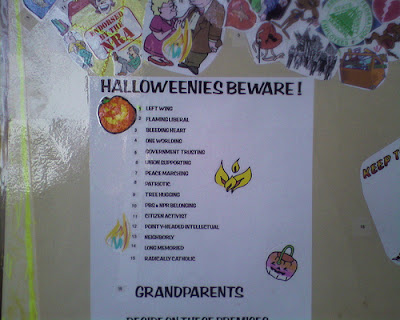 Friends of mine have a couple of these signs up at their front door. Sorry about cutting off the bottom of the picture, The sign reads: "Halloweenies Beware! (and then the descriptive list) Grandparents reside on the premises.

This is fair warning to all trick-or-treaters that they are receiving candy from:

Scary! Sends chills down my spine!

I would suspect liberal amounts of candy from these folks... 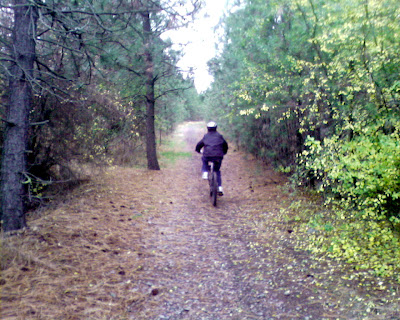 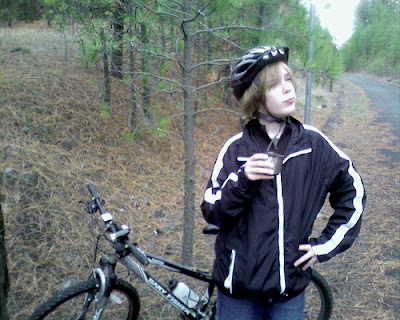 Promised Aidan last week that we would do the Fish Lake Trail this weekend. This morning, he stumbled out of bed, looked out the window and scratched himself. It looked like it would either rain or snow. I thought to myself - I'm off the hook. He won't want to bike in this! Was I wrong. "We're still doing Fish Lake, right Dad?" He would have none of it. I even offered a different shorter ride.

The Rosauer's billboard read 42 degrees. Luckily, we were well provisioned with hot tea and chocolate. We rode through Vinegar Flats across 195, Marshall Road and then on to the trail. This was Aidan's first time on the Fish Lake Trail.

We went 10 miles past Marshall and the "tunnel." A little tea and hot chocolate and we turned around and headed home, up the hill and back home.

It seems to me that there is more pavement on the trail than last year, but it could just be my imagination. I kinda like the different toppings. There aren't very many people on the trail.

Maybe one more (trip out to Cheney have a couple of beers and turn around) before the snow flies.
Posted by EvilElf at 4:57 PM 1 comment: 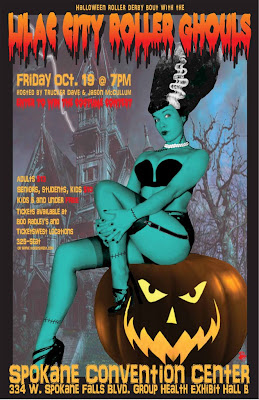 You knew there was going to be trouble. There has always been bad blood between the Toothless Annies and the Pretty Deads. Everyone knows that. And last night, that bad blood was spilled - on both sides. This is one sports team that I can get behind.

Forget THE SHOCK. Forget THE CHIEFS. Forget THE INDIANS. Spokane has been gifted with these wheeled vixens and we need to acknowledge that. Elbows and fists were flying, and so were the skaters themselves - right into the fans! Think of NASCAR without the cars and you're heading in the right direction.

November 16th is the next derby. Tickets are on sale at Boo Radleys.

The only downer was that the convention center ran out of beer before the event even started. There must have been 10 convention center people working it, so it must have cost a lot to have it there. No beer? OK, make that two iced teas. Here's a 20. Oh you don't haver change?!?! Come on convention center. You better do better than that!
Posted by EvilElf at 4:31 PM 2 comments: Photo-0057.jpg
Originally uploaded by Griffith Family
I am really beginning to believe that the best way to come to appreciate our town is on bicycle.

I've been commuting by bicycle in Spokane (sometimes more fervently than others) since 1982. But, it's just been the past 10 years or so that I have felt comfortable to "mix it up" in traffic. Also with aging knees, I find I am more inclined to get on my bike for exercise than to run some days. And the payoff is a scene like this. Throw in the smells and sounds that you can only obtain on a bike and it's simply the best.

Talk to someone from Portland. They gush about their town. Visit Portland, you will too. I wonder how much if this appreciation is due to the evangelizing power of the bicycle. I would suspect quite a bit.

Riders come to appreciate their town, and by riding in auto traffic, they show others that they aren't tied to the car. You can get fresh air, exercise, adventure and a healthy dose of beauty - simply by going to work or the store in a more fun fashion.

All to say, if you're so inclined. Dust that bike off. Pump up the tires and go for a short ride in your neighborhood. You might be surprised at what's out there!
Posted by EvilElf at 6:10 PM No comments: