45 minutes from Downtown - without a North-South Freeway... 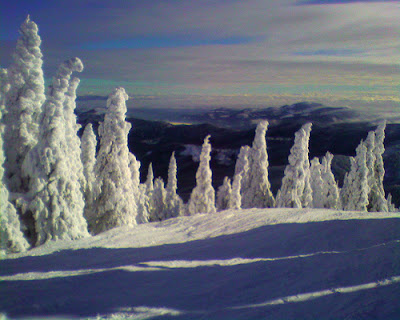 Near nature? Near perfect? On a day like this, you can almost believe the slogan. Mt. Spokane is an amazing spectacle today. How many cities have such a great destination right in their backyard?

This may seem like I am changing the subject, but bear with me. How's about we 86 the North-South Freeway and build a North-South lightrail instead? You could run it right through the abandoned switchyards in Hillyard. Put bike and pedestrian paths in too. How far could you take it? Why not to the base of Mt. Spokane? Have a shuttle bus service, maybe even a tram, to the the top.

Now, I know we're not Aspen or Sun Valley. But, hey most of the country doesn't have anything like we have. And we could be a very economical, yet very cool place for bicyclists, skiers and kayakers to visit.

I mean there are commercials everyday for BRANSON! How did that happen?

On the way home from skiing, we put our car in the grooves of I-90 and let the autopilot take over. That's right - the grooves they fixed a couple of years ago.

I think freeways are necessary, but do we ever sit down and think about the toll they extract? For whatever reason, they just don't stay repaired for very long (unlike the freeways in Europe). Scam? Poor workmanship? Overuse? Studded tires? Built-in work forever? I don't know. But a North-South freeway is going to cost a lot to keep up.

And the costs in other ways are pretty substantial too. Look at beautiful LC High School standing in the shadow of the concrete. Visualize how the South Hill once flowed into Brown's Addition. What freeways touch they kill.

Lastly, it is proven that freeways enable urban sprawl. What if you had to choose between living in Spokane, close to where you work or living in Mead or Elk. Would a North-South freeway encourage you to live further away? You bet it would. Why are my tax dollars going to be spent so you don't have to contribute your property tax dollars to my city? Why will I have to pay so you can pump carbon monoxide into my lungs? Again, I realize that there is a need for freeways, but urban sprawl is a consequence of fulfilling that need.

Anyway, the point is probably moot, now that it looks like we east-siders will have to foot the bill for the freeway. We're not very good about that. Hoorah!!!

Anyway, all to say, a North-South choo choo would be very cool, and a North-South Freeway is a bad idea. Oh yeah - And Mt Spokane rocks!

What I did with those lights... 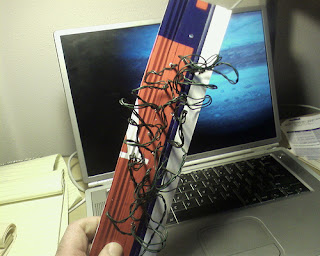 After I took off the LED Christmas lights from the bicycle, I really felt bummed to put them away. So instead it was a pretty easy job to cut out a small rectangle from a campaign sign, drill some holes, get out the bungee chords and go to town. I've got my eyes open for all blue lights. I think that would look keen.
Posted by EvilElf at 7:49 PM No comments: 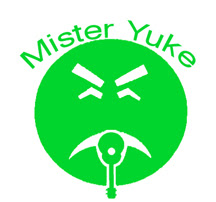 Click on the link above to listen. It's obvious he is dealing with some sort of infatuation with Ms Milsap. He says the work is cathartic, but I swear I hear him sobbing at the end. Maybe not... And where's the ukulele music, Mister Yuke, eh?


Here's a link to the lyrics.

Thanks Mister Yuke, and I hope you get feeling better.
Posted by EvilElf at 8:38 AM 2 comments:

Engine 3 in its holiday finery... 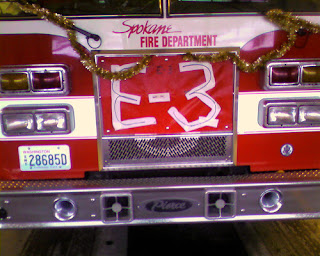 It's beginning to look a lot like Christmas!
Posted by EvilElf at 9:35 AM No comments: 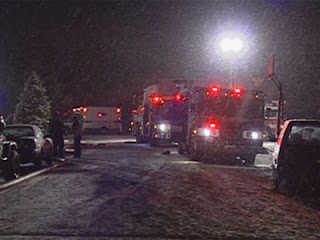 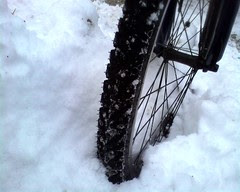 
I almost forgot again to take a picture of the tires, but here they are. I will quit with the glowing recommendations. I am beginning to sound like a commercial.

Suffice it to say, after a night of some firefighting and medical calls, they helped this old man get up a very big hill!

I am also posting a picture of E-3 in its holiday finery. I will try to get a better picture. This one is from KREM 2 and you really can't make out the fancy work with medical tape and holiday garland. But, look for it around the city - and feel the magic!

Hope it enhances your enjoyment of the holiday season.
Posted by EvilElf at 10:41 AM No comments:


Created with Admarket's flickrSLiDR.
Posted by EvilElf at 9:07 AM No comments:

Reporting live from the Tiki Pond!

Man, the cell phone sure does a wacky job of "vidya-makin'."

Put studded tires on the bike a couple of weeks ago. They make a difference. I was going to take some pictures, but I leave really early (in the dark) when I go to work, and always forget.

Coming home, it's uphill, and the tires have done great, especially when it's icy or compact snow. If you've been thinking about putting on studded tires (for your bicycle), I recommend it. I ordered mine from Bike Tires Direct.

They're the Tundra Wolf tires. I received them less than 24 hours after I ordered them - with just regular shipping. They have worked just fine on dry pavement too.

I haven't had to use the car yet to get to work and back. The gasoline in the Geo's tank has greatly appreciated in value. Too bad it can only hold 8 gallons or so.
Posted by EvilElf at 7:31 AM No comments: