I apple Spokane. Today, Every Day... your vote is needed again! 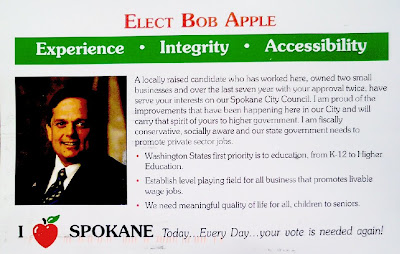 Click on the image to see the cellphone picture in greater detail. I don't think I have seen more misspellings, grammatical errors and just plain head-scratchers in so few sentences. Starting in the third person, the prose makes an interesting switch to the first.

Look, I know I have made my share of writing errors. However, the money that was spent on the printing and the mailing of these postcards should have made someone think about a proofread or two.

Bob's not the only one. There are a lot of funny campaign ads here in Spokane. Al French's are really busy, with way too much information in too many fonts.

The best was one from many years ago when Steve Corker was running for city council. The picture showed him sitting at a desk talking on the phone cradled upon his neck. One hand was typing on a computer keyboard and the other was dialing a cellphone. He was surrounded by a lot of gadgets. I guess they wanted to show he was a multi-tasking mother. It's sad when you see this from a run-of-the-mill politician, but Steve was also, at the time, an adjunct professor of marketing at GU.

I'll see if I can find that flyer. I save all the funny ones. I am adding Bob Apple's to the file.

This election, Steve Salvatori has the most clueless sign campaign. Life-size full body shots of him in his jeans, cowboy boots and sport jacket. The angle of his copy is that he is not a politician, and he's about fixing problems not politics. Gee, what a bold statement. I wonder if he is anti-pothole and anti-taxes. Maybe he's against bureaucrats and commies too. One hopes he will "trim the fat," as well.

That nobody draws mustaches on his signs or blackens a tooth or two is an affirmation that Spokane is one of the most civil places in the world. At least this is something we can be proud of. 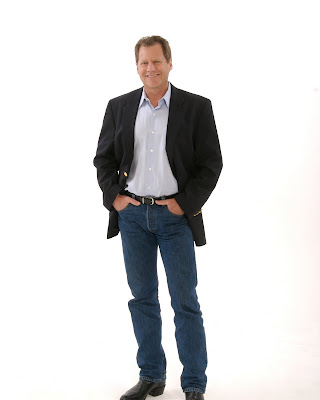 Hang on. I'm getting a robocall from the defender of keeping Christ in Christmas, the bullier of school children and the guy who drew the obvious similarities between gay marriage and bestiality - JOHN AHERN!! Yes, he want's his old job back. Man, I love this time of year!!!
Posted by EvilElf at 2:49 PM 3 comments: 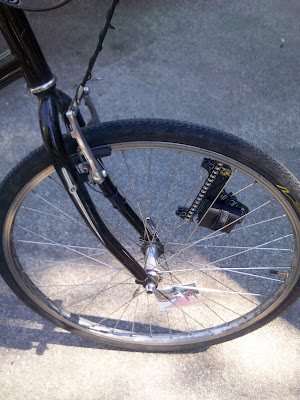 Switched to some skinnier tires for the XtraCycle this summer and am really noticing a difference. At just over an inch wide, they kick the ass of the 1.75 inch tires I previously had. The Monkey Light has not been put to much use lately because the daylight never seems to want to go. I think in a month or so I will be able to use it on my morning commute once again, sigh. 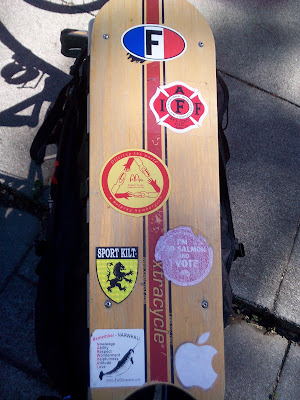 When I ride my Masi CXR out into the hinterlands I like to be prepared. So here is my kit: 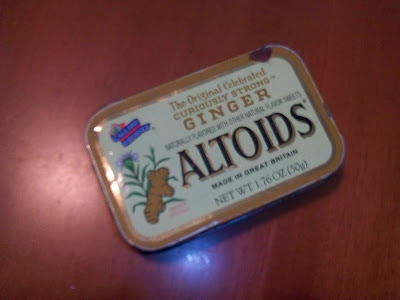 Inside is my house key, a $5 bill for emergency beer, a hand wipe, some benadryl in case of bee stings and a book of matches. Inside the paper (which could be used for tender) are some iodine tablets. I have ran out of water in some places where there are some creeks that have water of dubious potability. So, I can drop some tablets in a bottle filled with creek water and drink up. There's even an old ginger altoid. All that is missing is a condom and a cyanide capsule. 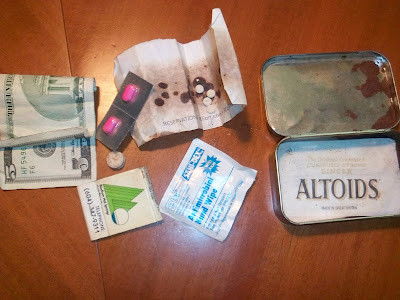 Speaking of condoms and cyanide capsules, here are some gratuitous shots of the box garden. My poppy eradication program has failed. 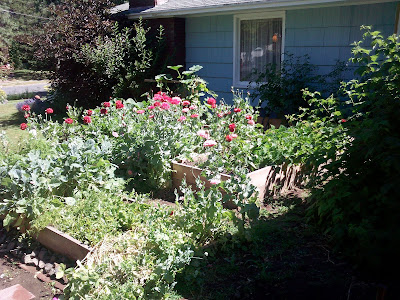 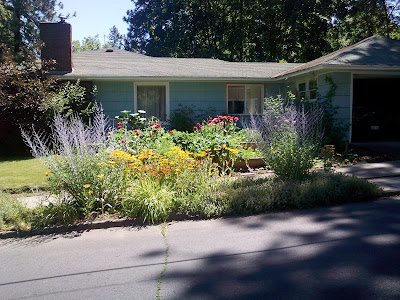 Had a France flashback the other day. Sarah and I went to see a movie downtown. Those of you who know Spokane know that it is not a real bustling place, usually. And so it was that afternoon. Yet, in five minutes we saw more obese people in Spokane than we did in five days in Paris (a place that hustles while it bustles). We wondered why that was. Food and booze were cheap enough in Paris. In fact, it seemed like food and drink consumption was the main event. Didn't see a lot of gyms there. Hardly noticed a jogger. There were some cyclists, but definitely that was not the norm. How is it that these people eat and drink whatever they want and yet they stay slim without pathological exercising?

Sarah had an interesting thought around this. She noticed that all the outdoor cafes' chairs faced outward to view passersby. Her theory is that the Parisians are continually checking each other out and would rather be dead than be seen as obese or wearing unfashionable clothes. As such they are ever mindful of their consumption. So, is this a good thing?
Posted by EvilElf at 7:31 PM 1 comment: 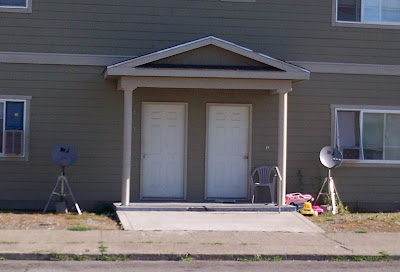 The story changes every time. But one thing remains the same. Doctor Smith was a total success upon his earthly return and redeemed himself. Or did he?
Posted by EvilElf at 1:27 PM 1 comment:

A quick peak at the bike scene in Amsterdam, Bruges and Paris 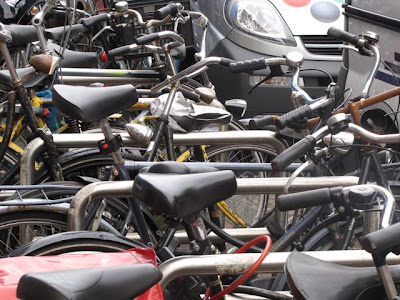 Everything that I had heard about Amsterdam and bicycles turned out to be true. Dedicated bike lanes, most of the time separated by barriers from traffic. Bicyclists even have their own traffic lights. 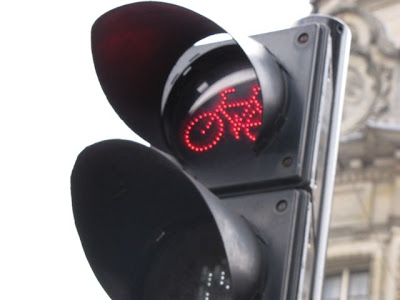 There was a parking lot/parkade outside the train station that was incredibly packed with thousands of bikes. 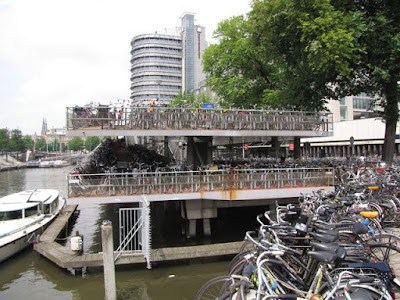 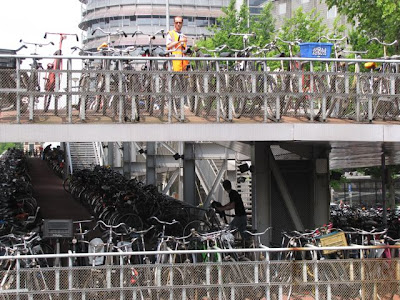 All over the city, you can find bike rentals. You don't pay much for the day and can really see Amsterdam the way it was meant to be seen. 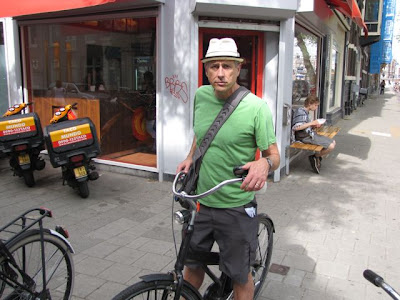 Of course, the Dutch bicycles are very stout and are usually single speed. 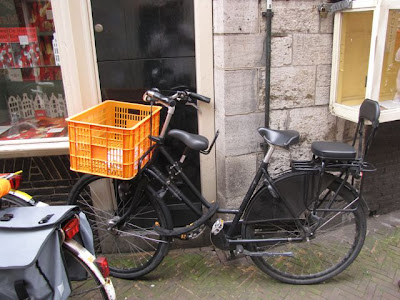 It is extremely flat and when you do encounter a rise in the road, you really know it riding these bicycles. Saw a lot of bakfiets, but saw more Dahon folding bikes there. Here's a bakfiet on steroids: 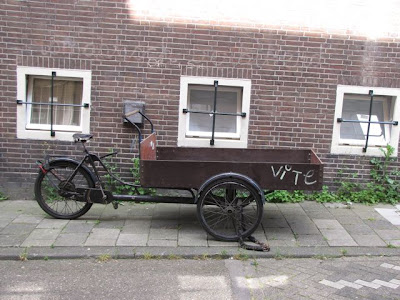 In Bruges, we rented bikes again. This time, we went out into the country along the canals and explored some windmills and an old church. 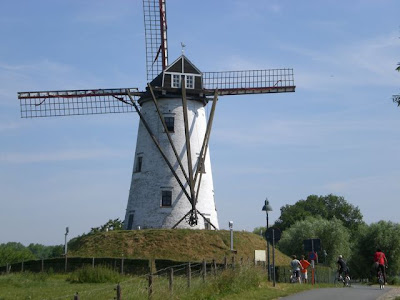 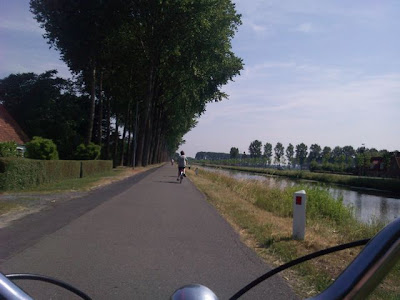 The Bruge bikes we rented had 5 gears. My chain came off along the way. Every bike I saw in Europe had chain guards on them. It's great but it can kind of slow you down in traffic when your putting your chain back on. The best thing about biking in Belgium is their beer. 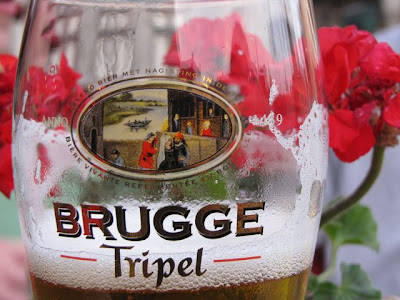 I finally get the connection between New Belgium Brewing and their support of bicycling.

In Paris, there was the famous Velibe bicycle rental system. 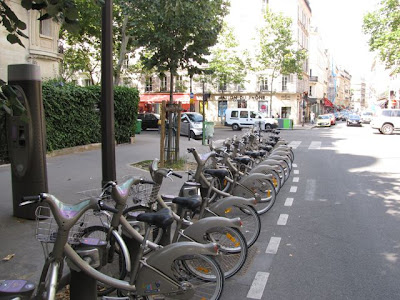 I have to admit the traffic was a little daunting. Their idea of a bike lane is one that is shared with taxis and buses! And motorists make their own rules. Sarah got a dirty look and a Gallic shrug (the only one we witnessed) from a motorcyclist as he hopped the curb onto the sidewalk and she happened to be walking where he wanted to motor. 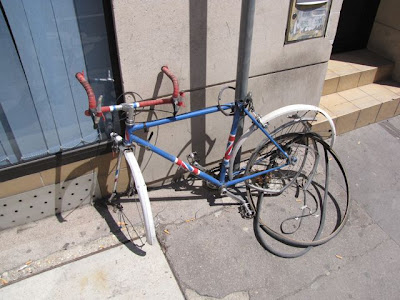 We never did turn a peddle in Paris. Walking and the Metro worked great though.

In Reims, they had set up a little museum in honor of the TDF's impending arrival with some interesting bicycles from the past. 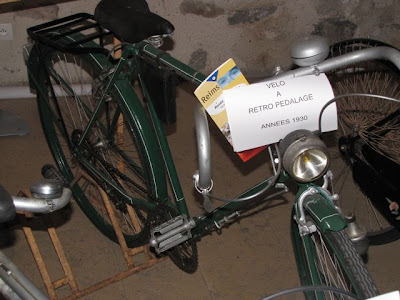 We watched the finish of the fourth stage. 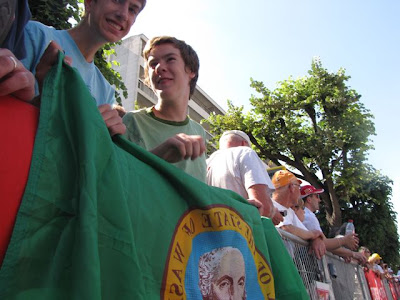 Yes, we noticed that the flag was backwards and fixed it before Tyler Farrar finished. Still, people didn't seem to recognize our state flag. Even when Ike wore it as a cape. 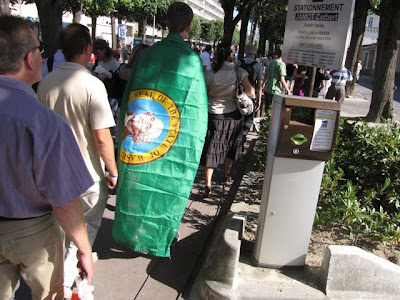 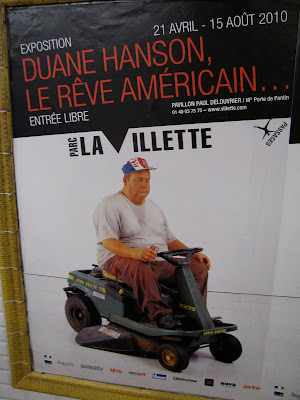 Rode around Amsterdam. Rode around Bruges and the Belgian countryside. Saw the TDF in Reims. Still a little jet lagged.
Posted by EvilElf at 8:46 AM 1 comment: