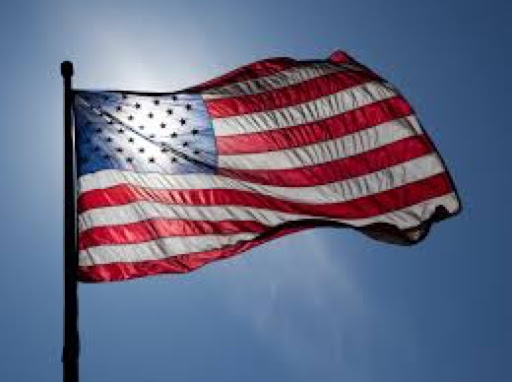 I was in the Air Force between 1984 and 1992, pretty much the peak and then the deescalation of the Cold War. I had a front row seat as a bombardier on B-52s.

You've seen how worked up people get about ISIS and how Conservative politicians today try to outdo each other on stating how massive their military response would be to this "threat" to America. Well, during the 60s, 70s and 80s America had a little more to contend with than a ragtag group of extremists. We had another nation, armed as well as we were, ready to destroy the world if we made any aggressions against them. We held the same philosophy. And every day both nations stood on the brink of doing just that. Yet, we Americans continued to go about our daily lives, go to work, go to school, get married, have children. And governments went about their daily business - making treaties with enemies, providing a stage for economic/medical/educational security for their citizens the best they could. It was a different time for the United States.

When I sat on alert, ready to bomb the Soviet Union, I knew my job really well. If I had to do the unpleasant task of sending all corners of the earth back to the Stone Age, I would have done it flawlessly. Here's the thing, I pretty much knew I wouldn't have to do it. Why? Because the United States (and I suspect nations that were enemies of the USA) were governed by rational people. Indeed, the citizens of the United States were a rational bunch. I felt safe in my job knowing that only in the most dire circumstances would I have to do the terrible deed, a deed which would have, more than likely, killed me and my crew in the process. I should add, "thankfully killed me in the process." My family, my friends, my home, my city - all that I knew would be vaporized or dying a terrible death before I ever released my first bomb on the Soviet Homeland.

At the end of my Air Force career, there seemed to be a new bunch of guys entering the service. They were in the vanguard of a new political movement. They called themselves "ditto-heads" - followers of radio talk show host Rush Limabaugh. I was introduced to a new way of "thinking" about our nation by these new guys who were very emotional about their cause.

When the twin towers fell, I was now working as a firefighter. 343 of my brother firefighters died simultaneously in collapsing structures trying to save lives. All firefighters,the entire nation and most of the world, mourned their sacrifice.

Not long after, plastic American flags started going up on cars, sometimes dozens of flags on a single car. Talk radio was sizzling with the excitement of retribution. To step back and formulate was a sign of weakness - if not traitorism. We invaded Afghanistan, and when the emotional frenzy here at home swelled, we invaded Iraq. I spoke out against the pending Iraq War at a rally and got heckled by young guys in loud cars. They didn't want anyone to imperil the emotional high they were enjoying from the prospect of either having a clear direction in their lives or just the enjoyable prospect of killing other people.

We all know where it went from here. I suspect that few among the most ardent supporters of a rush to war with Iraq would admit, today, that they supported the war in the first place.

I believe the majority of we who call ourselves "Americans" are still a rational bunch. There aren't as many of us as there used to be, but we're still the majority.

This Memorial Day, we thank those who have died in the service of our country - in the service of us. You can say, they died for our freedom, if you like. But, it's bigger than that. They died because we asked them to. We asked them to for all sorts of reasons. Each of us have to look into our own hearts for that reason. Love of country, fear, personal failure, anger, conquest, moral certitude, survival, love of others - all motivations good and bad to ask another to die for you. You will have to be the judge of that.

Sometimes, you get what you pay for. If, for whatever reason, you vote for a president or a congressman or a senator who promises you a war, you should believe what he or she says. You can't feign ingnorance at the outcome of your decision.

Some will get a sentimental rush today, thinking about those who did their duty and paid the ultimate price for all of us. It is a sweet, sad thing. Most of us know, maybe even served with, those who have bravely fallen. How many of the folks who led the charge to imperil our servicemen and servicewomen will realize their role in the deadly transaction, as they enjoy the sentimentality of the day?

I used to trust that rational people kept our country, it's people, its treasure safe. It's time for the rational to assert themselves again.

God bless our fallen. Let's make ourselves worthy of their sacrifice.
Posted by EvilElf at 12:41 PM 1 comment:

We haven't camped at Skookum Lake in over 20 years. Back then camping was about kids and fishing.  I always had to have a fishing component whenever we camped. This time Sarah and I headed out for a quick overnighter with no agenda other than we want to get our car camping "dialed in" again. We're going to do more of the Trail Maniacs camping and trail running series and do some other camping this summer. 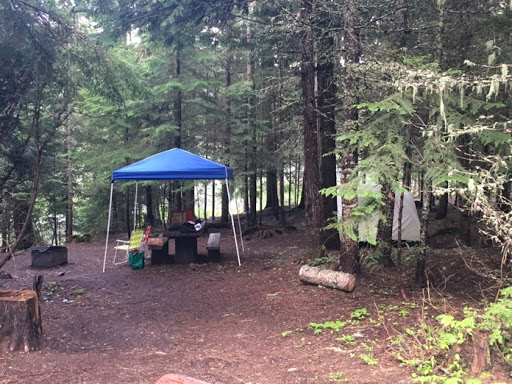 We had Skookum all to ourselves. The camp host wasn't even around until late at night. We didn't bring much water because Skookum has a potable source. Lesson number one - always bring water or a way to filter water. The hand pump in the campground yielded only a brown milky liquid. Asking the host about it in the morning (under the guise of asking him for some water) he told us that the water had been certified as "safe." He said that water was all he ever drank. Frankly, he didn't look all that healthy. So we pulled up camp quickly and went to Old Town for breakfast. 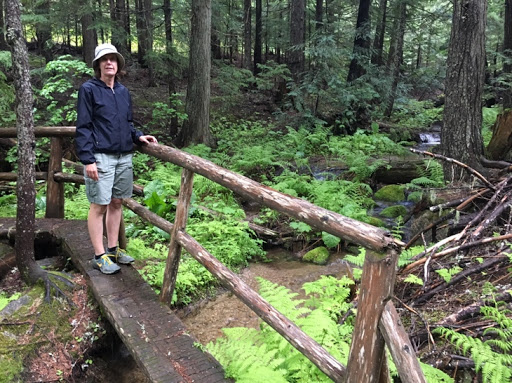 The afternoon we arrived and into the evening we had a great time until we ran out of water and even then it was fun. We were prepared for rain, but the rain really was intermittent and stopped by nightfall. It was cold, but it warmed up in the tent and I don't think I ever slept better. Sarah had the idea of using Costco sleeping mats for our bed and what a great idea that was. Unlike air mattresses they really insulated us from the cold ground and were super comfortable. They did take up a lot of room to transport but it was totally worth it. 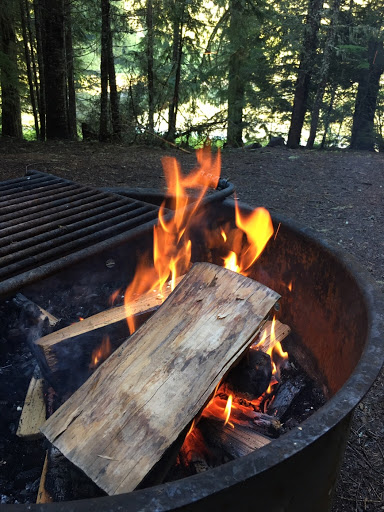 And I had the best of luck with Jiffy Pop. Something that has eluded me for forty years. 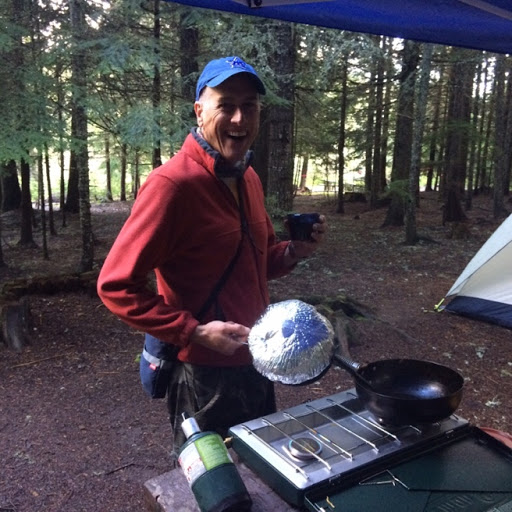 Posted by EvilElf at 1:50 PM No comments:

Been a little while...

As usual, being busy and having something to write about means not having much time to write. There's a lot going on. In no apparent order: 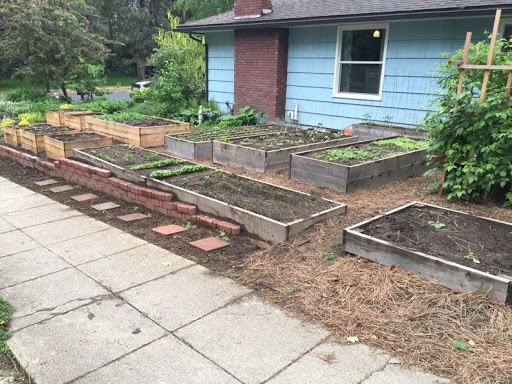 I built some new boxes for the garden. Going to put a little patio behind the new ones. Plan on making it from whatever scrap I can find around the backyard. Stay tuned. 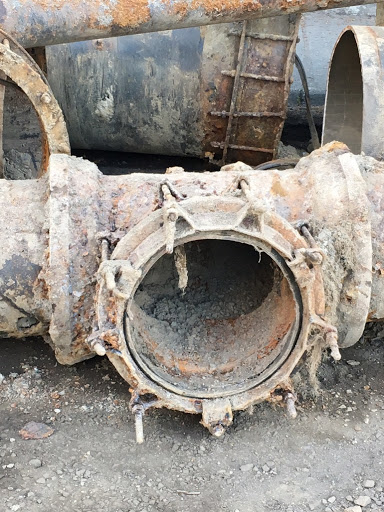 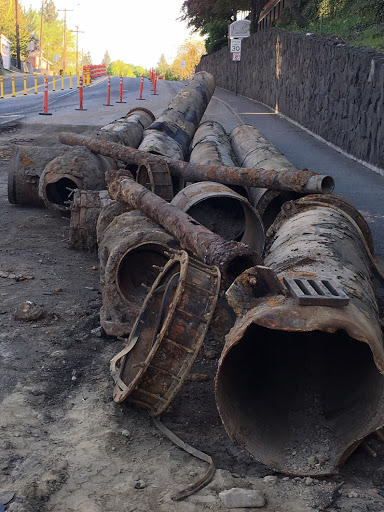 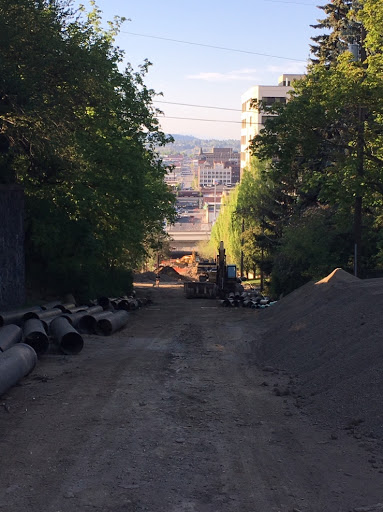 The torn up Monroe Street hill had a lot of cool old sewer pipes! 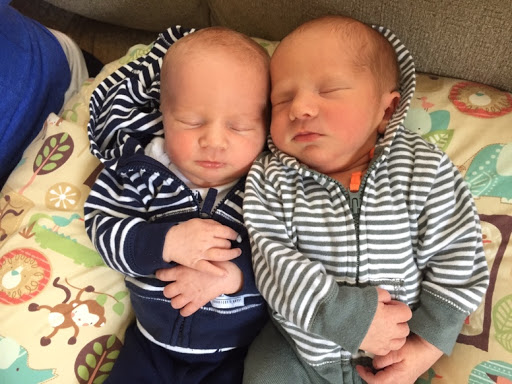 The new grandsons are getting big! 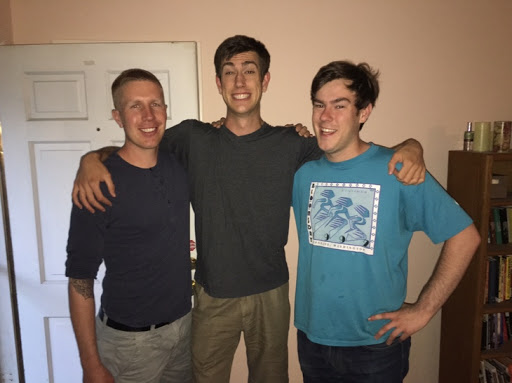 So are the sons. 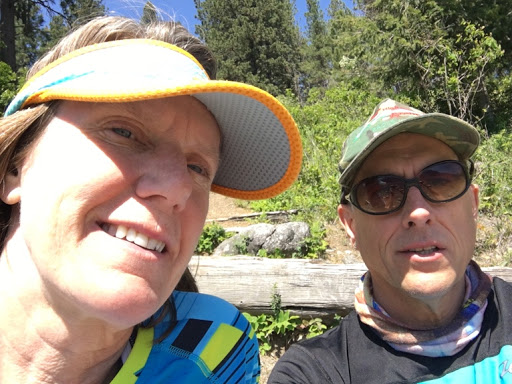 Sarah and I are doing more trail running. We were out at Heyburn State Park for a Trail Maniacs run and party. A lot of fun! We will be doing more of those! 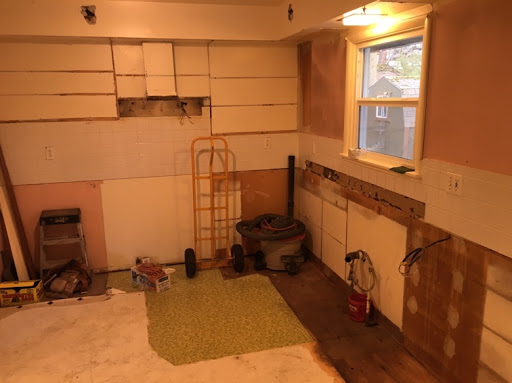 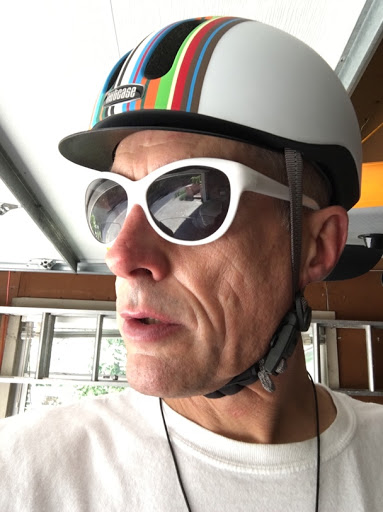 Gots me a new helmet!
Work has been really busy. If the last few weeks are any indication, we will be really busy at work once it really warms up. Some other interesting (weird/good/scary) things happening too. I am not going to report on that right now!

Posted by EvilElf at 2:44 PM No comments: