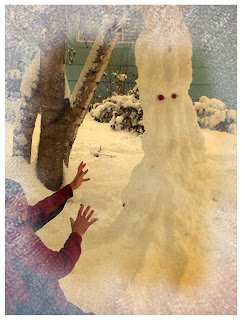 First snowcthulhu of the season. Nice work Ike and Aidan!
Posted by EvilElf at 2:44 PM No comments:

Casualty of the budget? 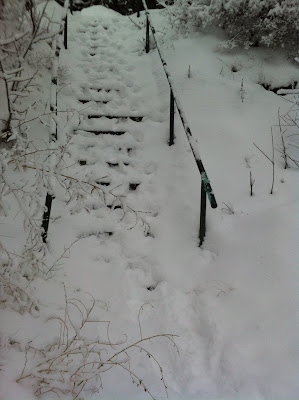 With a placard reading "STAIRS CLOSED," these steps at Cliff and Lincoln are always cabled off well before the snow starts. This means that people have to step over the cable on the top and the bottom to use them, oftentimes plummeting to their deaths (maybe not physical deaths).

The city usually outlaws the stairs when the leaves start turning.

When you outlaw the stairs in the snow then only outlaws will stare at the snow.

Here is a creative solution they came up with a couple of years ago for the Perry stairs: 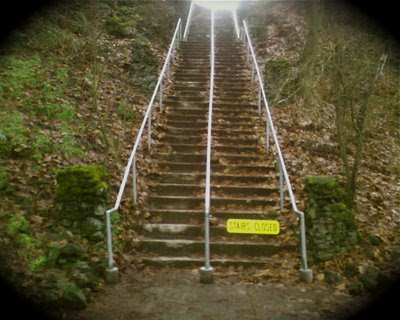 It's a good compromise.
Posted by EvilElf at 10:13 AM No comments: 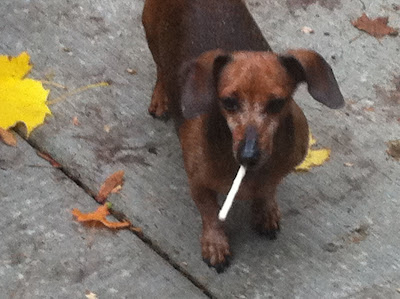 It's been a while since I posted. A lot is going on!

1. RUNNING - North Central and Lewis and Clark move on to Nationals. LC's Kenji Bierig won Border Clash last week. NC and LC runners are still out there in the cold and snow prepping for the big one. For all of us mortal runners, Turkey Trot is tomorrow.

2. BIKING - First real snow commute of the season yesterday and the day before. Amazingly slippery going uphill. Over 10 percent grade, I was pushing my bike.

3. WORK- Busy with the usual. Almost all of our calls on the big "BLIZZARD 2010" day were alcohol related. One shirtless fellow tried to get into some lady's van while she was backed up on Maple. Scary enough, but more scary when we saw him running across Maple, pants around his knees sporting a homemade g-string.

4. UNION- Local 29 leadership has been in negotiations for months with the city to prevent layoffs. Last week the city accepted an offer made by Local 29. Right now it is being voted upon by the membership. We'll see what happens.

5. SAUNA- Awesome! However, I had it up to 180 yesterday and when I poured some water on the rocks, I think I burnt the top of my head a little. It looks like a sunburn (but it's not). 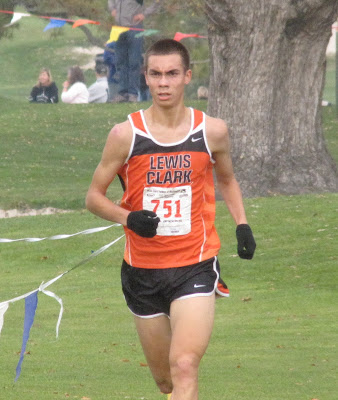 Pretty choppy video, but it looked like Kenji hung back until the very end and then poured it on to win! LC is poised to win this thing!!! Great job Kenji, Ike and the whole LC TEAM!!!

UPDATE: North Central placed First! Lewis and Clark placed Second! I would say that means Spokane, once again, is the Number One city in the Northwest for high school XC! Eisenhower from Yakima placed Third. CONGRATS TO NC AND LC!!!! Both go on to Nationals!!!
Posted by EvilElf at 1:52 PM 1 comment:

Coverage starts at 11am. I am not sure what the order is. All I know is our boys start at 1:30 pm. You can watch online here.
Posted by EvilElf at 8:56 AM No comments:

As seen in the "newspaper" this morning. 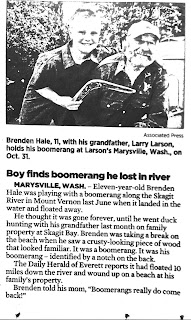 Good luck parodying this!
Posted by EvilElf at 8:15 AM 5 comments: 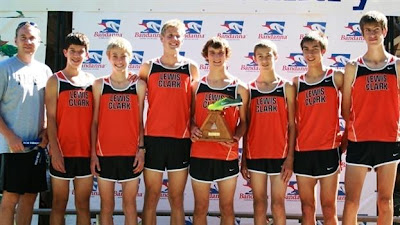 Lewis and Clark High School's Cross Country Team has done really well this season. They tied for first at Regionals with Eisenhower's team from Yakima. The tie was broken by the sixth runner from Eisenhower, so Eisenhower won. LC still continues on to the 4A State Championship this weekend.

LCHS is a 4A school. And, of course, North Central High School (3A school) remains a powerhouse - last year they were the number one high school cross country team IN THE NATION. This year, when LCHS and NCHS have competed against each other this year, it has always been close, with wins going in both directions. The Power Ade Fab 50 ESPN Rise Poll makes special notice of LC's team yesterday, as well as NC's.

I think Spokane has to be seen as the number-one high school cross country town in the nation. All the other 3A and 4A Spokane high schools are right up there with LC and NC too. There is a real kinship among them that I think comes from the heart of what makes these guys so good. At the beginning of every meet, you see the competing schools cooly gauge each other before the gun is fired. At the end of the run, you see all the runners celebrate each others' efforts with genuine joy. You really don't see that in a lot of sports.

Of course, I am writing this as a proud dad. I'm not only proud (more admiring and inspired) of the accomplishments of my son and the entire team, I am moved by the incredible work these guys have done to get here. Running year-round, every day - twice a day, in the dark, in the heat, in the snow, on the ice and on the steep, hot, trails, these guys have shown so much heart and so much dedication that I have to admit I am getting a little choked up as I type these words.

In a place where lunacy and laziness of thought and deed seem to now hold sway, in a time where instant gratification and an almost Alzheimer-like amnesia seems to have stupefied those around us, I look to the work, the dedication, the humbleness and the smarts these guys display - day in and day out - and I feel so good about the future of us.

Thanks for the example and the hope, all you high school runners!
Posted by EvilElf at 8:47 AM 7 comments:

Ride to work this morning... 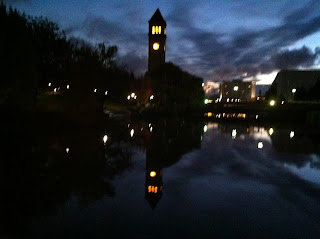