Weird clouds the other night! 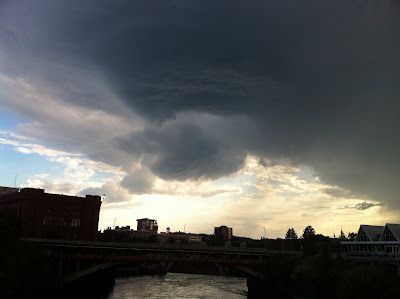 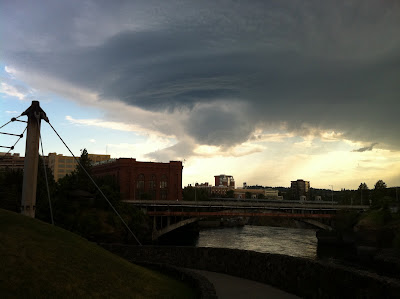 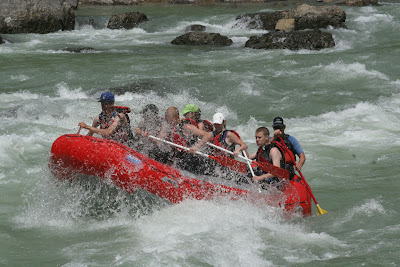 I think the last time I had been to Glacier was when I was 14. I don't know why it has taken so long to go back. Well, I wasn't able to drive for the first two years after that for one thing, I guess.

First off, if you head east, you know in your heart that you are from the BIG CITY - SPOKANE, until you start getting Minneapolish. If you head west, you will always be the hayseed. So, it's good for your self esteem, plus it puts you in the city slicker driver's seat for the feast that awaits. This ontological reframing heightens the experience of an eastward trek through roadtrip Americana - national parks, quirky museums, drive-through bear prisons, life-size fiberglass dinosaurs, pioneer sod houses, gold mine tours and always the 50,000 Silver Dollar Bar - where you must stock up on edged weapons and everclear. Head east and you are the Griswolds. Head west and you are just self-conscious and suspicious.

Plus when you travel east, you hit the no-shit Rocky Mountains, big waterfalls, and incredible roadkill.

The destination of Glacier Park/ Glacier National Park/ Glacier International Peace Park would be well worth it if the drive were twice as long. Great hikes. Unbelievable mountains and waterfalls. And the people!

Lots of people. Glacier is so beautiful, so unique, so much of a destination, that its visitors are from all over. Hiking up a trail, you witness America's verbal accents from Bronx to Southern Belle. There is Japanese, German, Spanish, Dutch, Portugese, French and Italian sprechen on the trail. Sometimes it's quiet. Young families and grandparents not speaking a word, just being there in the movement and in the splendor. They get to share with another generation what they think is important and beautiful to them. And they don't need to say much because, well, holy shit, look at that. 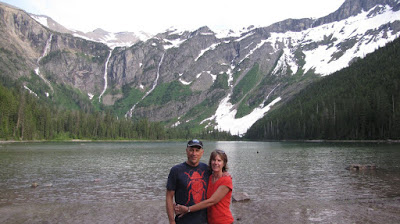 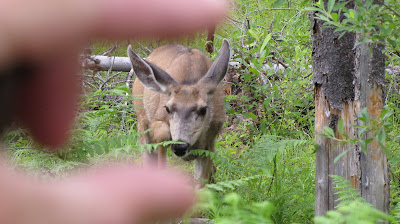 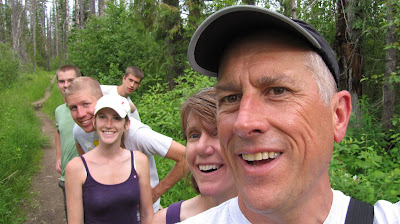 Our family has made a practice of going on a rafting trip every year for quite a few summers now. This year, we rafted the middle fork of the Flathead. This river separates Glacier from the Bob Marshall. The temperature of the water was 38F while the air was pushing 90. Rapids were kind of subdued because the water was so high. And it was beautiful. We have rafted enough, over the years, that we could probably get our own raft, but I really like having a guide, having someone cook for you and all that. There is something really cool about all of us rowing together really well after having done it so much. It's nice. 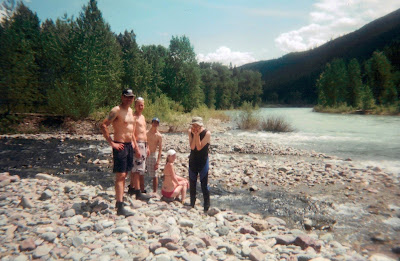 Here is a bear "experience." 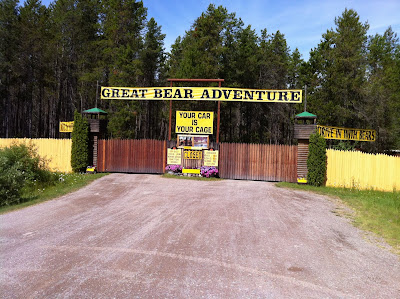 It's a place where you can pay $15 a head to drive around some black bears. I really liked their sign and its philosophic intent: 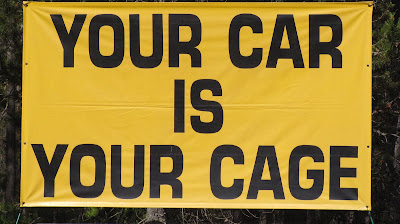 When you go through Polson on Flathead Lake, make sure you visit the Miracle of America Museum. 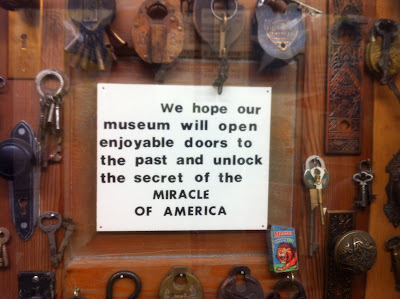 I heard the owner telling a German lady how much he hated President Obama because "he's not very American." She told him that she didn't like her leader very much either. The fellow has it all figured out with displays like this: 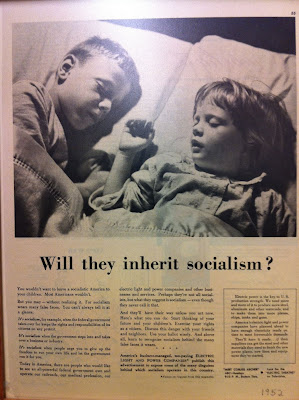 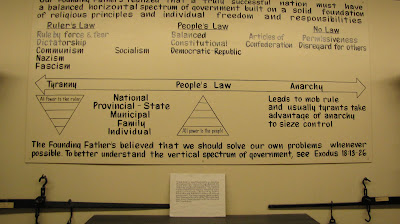 I don't agree with his politics and some of his beliefs, but my hat is off to him. Incredible stuff: 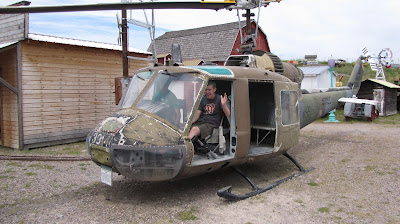 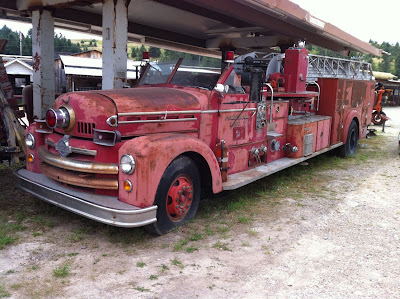 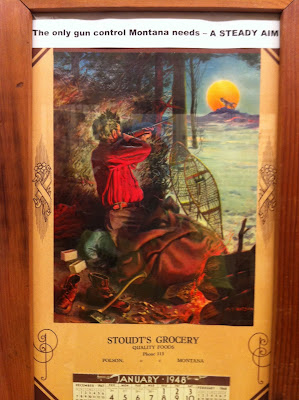 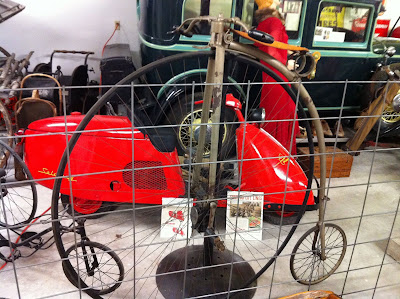 There's a new distillery with a tasting room in West Glacier, too. Wow!
Posted by EvilElf at 3:01 PM 1 comment:

Well, it's new for me anyway. The last two months I was in an interim promotional position, so I had to fill in at a couple of different stations. A little over a week ago, I was officially promoted. There isn't a fire lieutenant paramedic slot at Station Three, so I had to go someplace else. Which meant moving out of my station of nine years. I had a lot of locker cleaning to do and a lot of gear to move out. And of course, on moving day, as soon as I got all my stuff packed up, my old crew was off to a fire! Figures.

I moved stuff over one bike trip at a time, after I brought it all home in my car. 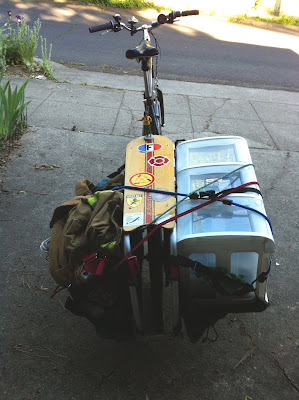 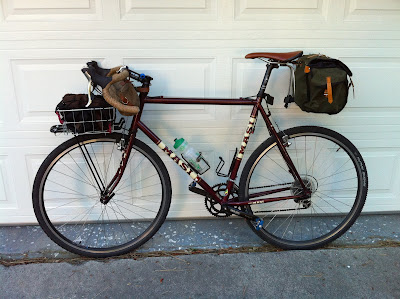 My new station is Station 11 - up on Perry and 32nd. It is a nice place. The crew I am on rocks! I was on an engine but am now on a pumper-ladder. It is sort of the hybrid bike of fire apparatus - part engine, part ladder. So, there's a whole lot of stuff to reacquaint myself with.

No more hill climbing coming home. Just a slight rise on the way to work. It's about a mile closer too. There aren't quite as many calls there as Station 3, but it's a fairly busy place and it's pretty close to home. All in all, I really lucked out.
Posted by EvilElf at 6:54 AM 3 comments: