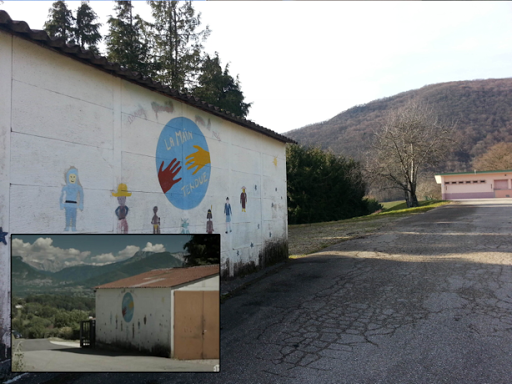 Fear is the mind-killer... 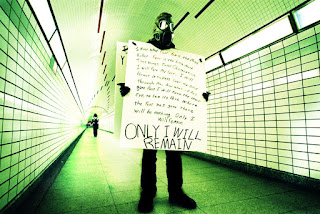 I must not fear.

Fear is the mind-killer.
Fear is the little-death that brings total obliteration.

I will face my fear.
I will permit it to pass over me and through me.

And when it has gone past I will turn the inner eye to see its path.
Where the fear has gone there will be nothing.

Only I will remain.

Last shift when I got off work, I did my usual wintertime run home. In the deep snow, coming up the hill, after being up all night, I felt really beat. This unpacked snow makes the footing much like running on loose sand at the beach. Throw in some vertical climb, and it can be pretty exhausting.

Sarah had just finished her run when I arrived. She had fired up the sauna earlier, so the timing was right and we were able to take one of those rare saunas together. Maybe it's because I get really soaked with sweat in the sauna and it grosses her out, or maybe she worries that she has not had a CPR refresher class in a while. For whatever reason, usually, we each sauna alone.

We had a great conversation in the 180 degree heat and, as usual, wound up talking politics. Sarah said some things that really made sense to me, some things I hadn’t considered before and I like it!

As anyone who reads this blog knows, I get frustrated that no matter how many facts and figures I show, no matter how many graphs or history lessons get proffered, there is really no one I have spoken with who has had their mind changed by my spouting off. I point to where the Dow Jones was when Bush left and Obama took the helm and where it is now. Likewise - unemployment, per capita income, abortions, wars, terrorist attacks, blah, blah, blah. I show you which party is consistently better for the economy, which party restored value in your home, etc. It just doesn’t matter. My voice is a lone one to you. Maybe the only one you are hearing, if you are a Conservative friend, that differs from your other friends and certainly from what you hear on the radio and in the corporate news media. To try to disprove what you feel is an impossible task and it’s the masochist in me that keeps thinking "maybe today…" As you have read in my last post, I am done with that. I repeated this to Sarah, as the steam hissed away and we baked.

Sarah’s observation in a nutshell (and I hope my memory does not do her a disservice) is that if emotions like fear are controlling someone’s life then there is no amount of logic or rational fact-delivering that will overcome that fear to enable someone to see things differently. Wow. She said that, in her opinion, the only way to break through that fear is to be a source of confident optimism and joy. Double wow. Sarah followed up with the thought that being kind to someone is not the same as being nice to someone. To be kind, is harder because you are, ultimately, caring about the well being of another. To be nice is a superficial response - usually not a bad one. Sometimes, trying to spread truth, joy and optimism will not be a “nice” undertaking but it should be a "kind" pursuit. I liked that a lot and will be trying to do this in 2017.

I don’t think that any one person will be able to overcome the state in which we find some of our friends and neighbors. How many of you have found that, even in their candidate’s unprecedented winning of the presidency, these friends are still angry and scared people? I know I sure have seen it. Maybe this is all they only know how to feel regarding politics any more.

It is hard to understand some of that when many of these folks have, because of government work, retired very early in their lives. Many of them have great careers because of government training them in skills - creating a great living for their families. Yet, there is much fear and anger toward the same social benevolence government provided them when offered to others. I think this may come from a mindset of the economics of scarcity versus the economics of plenty. It doesn’t matter the cause. Nothing is going to get them to want to build upon the gift of government and extend it to others, just as was done for them, until they can be unafraid and not angry. There are plenty of voices that make money and sell things to keep them angry and afraid.

So, why be a beacon of truth, kindness, joy and confident optimism if it doesn’t have any immediate effects on changing hearts and minds? These are the reasons for me:

1. I know I want to "win." It’s how I am built. I have mostly reined that in. I am selectively competitive in my life, but around issues of political thought, I now realize I am always competitive. What kind of effect does this have on the person I want to convince to see things my way? I would suspect it entrenches them. I would suspect they are as competitive as me and want "the win" too. I hereby surrender. Or better yet, I leave this game to others.

2. This is a collective approach. It will take hundreds of daily human interactions of kind, truthful, optimistic people to counter what one radio talk show will tell you in an afternoon. Why? He is an authority and you are entertained. Maybe in some kind of horror movie way, but still entertained. And if I share this mission with millions of others, it sure takes the load off me - making me a better person. Hopefully, it makes me a less arrogant person. And enjoyment of being with others (especially ones different than me) is something I have learned to really like. I've had to overcome a lot of early childhood programming, but I now love being a part of the parade, arm-in-arm with fellow travelers. It is becoming ever more important to me.

3. This is an approach for the long haul. I don’t know if you have ever been to the FDR Memorial in Washington D.C. It is, for me, as moving as the Vietnam War Memorial. The stuff that is inscribed in stone - quotes from Roosevelt in the depths of The Great Depression are amazing. Our country has moved so far to the right, that the words seem foreign. And even though Roosevelt was a centrist in his time, you realize FDR would not be able to be elected as dog catcher today in many parts of our country. But, the words are still true, and as are as timeless as the stone they are blasted into. It took us a long time to  turn our backs to these truths. It will take a long time to, once again, embrace them fully. But we will.

4. It’s all about me! Is this narcissistic? Gee, I hope so. Being a person who is confidently optimistic, a person who kindly promotes truth, is a good person to be. Having less stress and anger is a good thing mentally and physically. Why not model what you think is a good way to live just by living that way? Prove the truth in it to yourself and to others.

It’s not going to be easy. You can talk all you want about Russian hackers, the fake news outlets, etc., but If you're looking for a cartoon villain, why not mainstream media? They gave away billions of dollars of free airtime to Donald Trump. Why? It's called "investing," and it made them even more billions of dollars. They admit it. They know exactly how we are built and how to profit off of our fear and anger. Everyone will want to hear the next crazy Trump story. It's one of the nuttiest things that has happened in my lifetime. It’s entertainment. Eyeballs stay glued to their channels and advertising revenue goes through the roof. This will continue during the Trump presidency. They make money by making you angry and fearful.

Today, it is no longer about the truth, so weighing in on the media’s latest Trump story will have little effect on your friends’ opinions and beliefs. Joyful optimism and fearlessness will save the day! 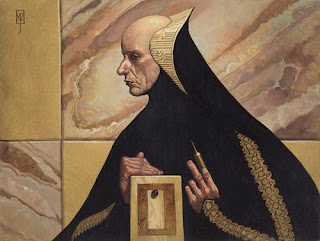 Posted by EvilElf at 4:44 PM No comments: 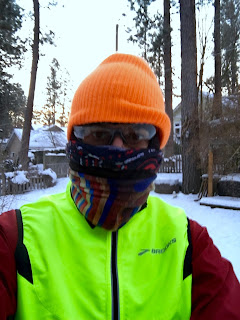 Just got in from a sub-zero run around the neighborhood. I am still running to and from work - about 3.5 miles each way, but have not been out in the really cold for just a “fun” run lately. So, I put on almost all the running clothes I own and headed out early this morning. 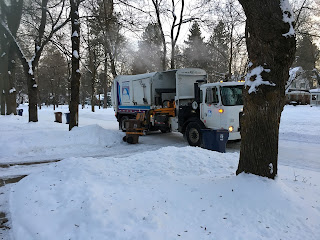 Do you know anyone who drives a garbage truck? I do. The two guys I know are among the most intelligent and caring folks I have ever met. I am glad they don’t have to get out of their trucks too much now that there is the mechanical arm device. 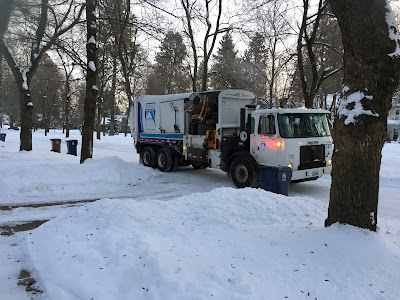 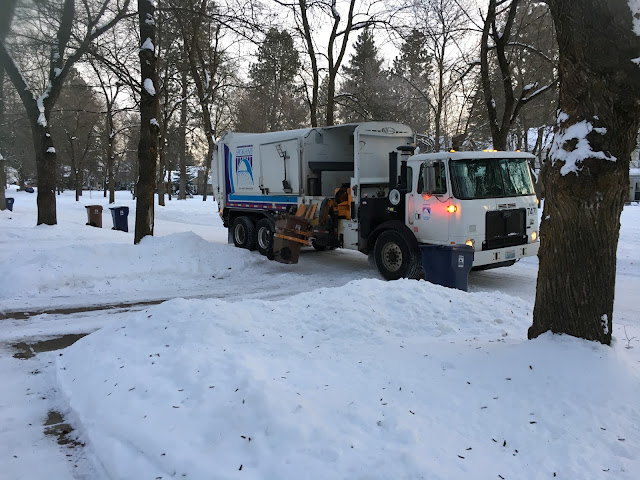 All the folks on Manito Blvd had their cans in an easy-to-reach spot for the arm. 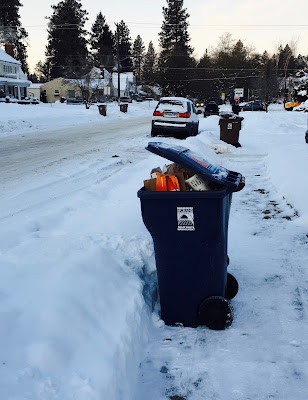 Even though it’s mechanical, I don’t think it’s magical. How do some people think it's going to reach 10 feet over a snow berm? And when you put a parked car in the mix…

I suspect that our garbage collector has to park their truck, get out and move the ill-placed cans to a more accessible location. But, you know what, hopefully, you get to meet the worker when they are doing this. They are all a nice bunch and will, more than likely, cheerfully overcome any obstacles you have inadvertently placed in front of them. 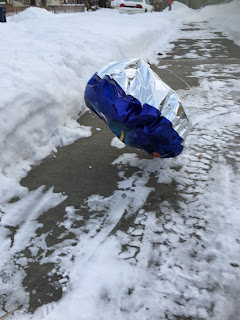 On a cold winter run, early this morning, I felt pretty warm.
Posted by EvilElf at 10:32 AM No comments: