FIrst attempt at this classy medium... 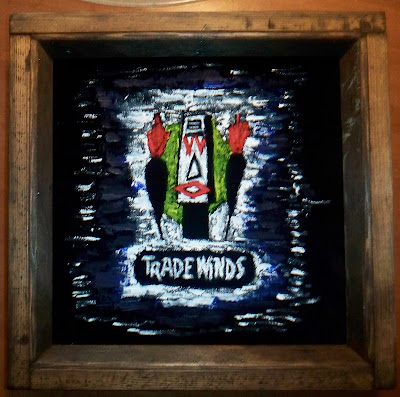 Sometimes you have to make what you want because no one else will.

So it was with the black velvet painting of the Trade Winds Motel logo. This was a first attempt and I learned a lot. First attempt at building a frame too. That was a learning experience as well. I have about six subjects lined up to put down on black velvet. All these projects are done in the hopes of building up enough skill for a planned technically difficult (for me) culminating project - one which I am excited to do, but not good enough... yet.
Posted by EvilElf at 4:30 PM 1 comment:

Sage Advice and Dining Invite at the 7th Rail... 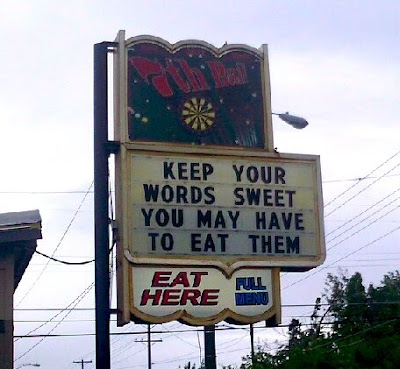 Have cruised past this sign for over a week now and just noticed the "EAT HERE - FULL MENU" tag at the bottom.

Years ago, we had a guy in full cardiac arrest here. Luckily, this bar is really close to the station. We were there in seconds.

We were running the code (I wasn't a paramedic yet, but was riding the seat as the acting lieutenant) when the crowd was led in a chant proclaiming the patient's name over and over again - actually screaming it. There were cheers and I think someone started "the wave" around the perimeter. The medics were getting a little flummoxed. I had to ask the crowd to kind of keep it down a bit. There was resistance. I suggested that they think of this place not as a sports bar (which it was at the time) but more of a hospital operating room. Was cheering and clapping, whooping and hollering and "the wave" proper behavior in an operating room? That won them over.

More importantly, the guy was dead (not mostly but fully) and the medics brought him back. He is still with us today. I know we have had another save there too, on a different shift.

All to say, the 7th Rail has plenty of words to serve, no matter what your appetite. And if you eat too much, we're right around the corner.
Posted by EvilElf at 8:29 AM 2 comments:

Life in the garden is good.

I am really on top of a lot of projects this spring. We had talked about enclosing our breezeway for the last six years or so. We finally hired a contractor who did the job and it is nicer than we ever thought it would be. With a solatube and lots of windows, it's a sunroom that will be much needed in the winter/early spring. 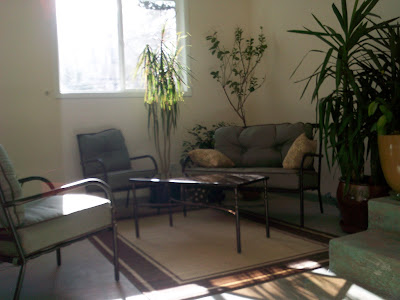 More raised beds in the garden was something I have been yacking about for years too. Now they're in and the crops are looking good. I sunk a mini deck behind the middle bed. It's just 3 by 4 feet - just big enough for two folding chairs. Here I am enjoying a beer in a rare unkilted moment. 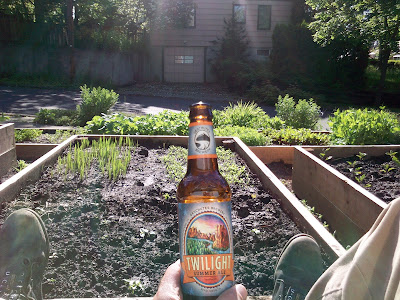 This Twilight Beer is good. Although I was expecting more of a tie-in to the movie. Oh well.

Hey, at Rosauers you can buy plastic onions to put your real onions in: 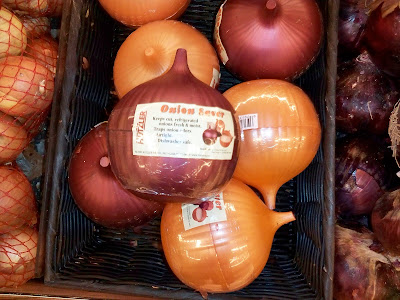 Posted by EvilElf at 7:16 PM No comments: