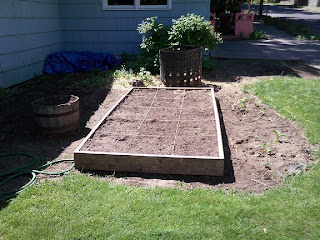 When we moved to our home (12 years ago?), the first thing we noticed was a forest of maple saplings - the backyard. After we removed all the little suckers, it was obvious that there wouldn't be enough sunshine for a decent garden. So, we dug up part of the frontyard and stuck it there.

Over the years, Sarah has dug up a lot of the frontyard and has put in many flowers. I've seen many a photographer clicking away on her parking strip wildflower garden on Wall. My vegetable garden always seems to elicit a few questions from walkers. I've given away a lot of stuff too. It's a funny thing. I like weeding, preparing the soil, planting the seeds, etc., but it always seems a little too final to go out and pick the vegetables. So, sometimes, someone wanting some zuchinni is a great incentive to pick.

I am trying a couple of different things this year. One is the grid in the raised bed. I've been reading up on the square foot gardening craze, and I thought that looked like fun. Another is the compost bin you see toward the back of the picture. I've taken the compost out and have put potatoes in there. As they sprout and grow, I will cover them with more straw. From what I've read, we will have a bin full of potatoes in the fall. We'll see!
Posted by EvilElf at 11:40 AM No comments:

No not the Wild Turkey at the Steelhead Grill.

I was riding home this morning and saw this turkey walking up Howard. After I took all these pictures, I realized that maybe this is not uncommon. I've seen 'em in my neighborhood, in the West Central Neighborhood, and other places not "wild."

I'm reminded of when I captured countless images of canada geese, decades ago, in Alaska. I couldn't believe that there were hundreds of them sitting in a park. Amazing. A few years later, I was knee-deep in canada gooseshit at Gonzaga U. There were more geese in Spokane than pigeons or seagulls. All to say, the pictures featured here will probably seem pretty dorky, pretty fast - maybe even instantaneously. 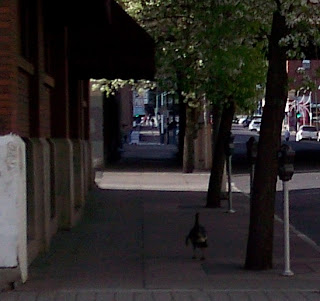 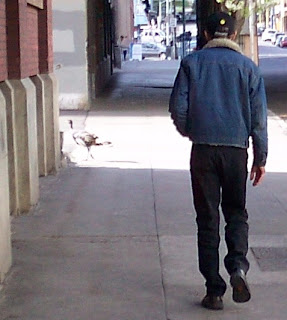 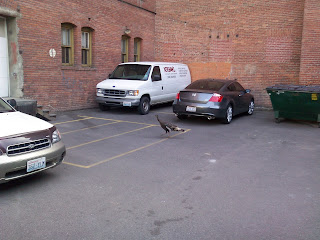 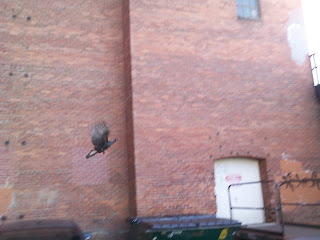 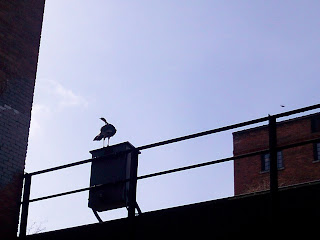 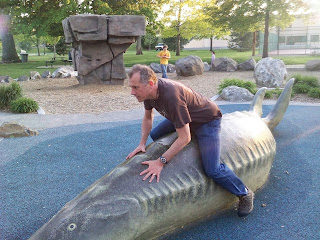 The weather in the Tri-cities was great! I only got lost twice. There was some dialogue on the wisdom of riding the cyclocross bicycle for a hundred miles. Hey, it's the fastest bike I have OK?

Jesse lent me a road wheelset, but it just didn't seem right to do that to the Masi. About mile 70, I was kinda wishing I had gone with the road tires and wheels.

I would advance on the climbs. On the descents I held my own, but on the flats I was left behind. Every climb, I would gain all the distance I had lost. Then, down the hill, and the cycle would start over again and again - like a yoyo, yo. 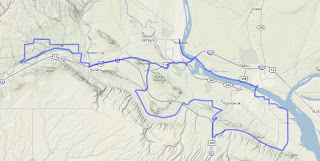 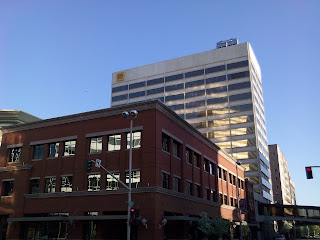 Had a very nice ride into work yesterday. There are more cyclists showing up on the street. This could be the year when we achieve critical mass (the original def). Have been seeing more and more cyclists on the sidewalk downtown. Not the usual transient bikers, but hipster kids - going fast - darting around pedestrians. Whatup whippersnappers? Get a helmet, slacker, and get the f@#k off the sidewalk.

The closest I ever came to hitting a cyclist with my car was in San Francisco. I was making a left turn across an empty crosswalk when she came out of nowhere zipping along on the sidewalk at 15 MPH to take advantage of the fading "walk" sign. It scared the shit out of me.

A confession: I use a 10-foot section of sidewalk between the Super C and the station's approach when I arrive at work in the morning, but I keep it very slow. Otherwise, I have to go around the block to get to work. Still, I realize that if someone came crawling from the alley and I ran over them in the Super C parking lot, I would totally be at fault. 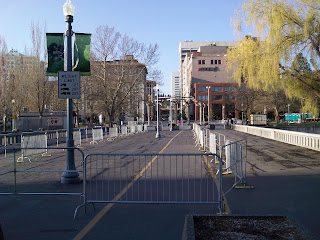 Just when you thought the awesome festival barricade around the fountain was the best, they've kicked it up a notch to barricade off the middle of the Howard St. bridge. Some concertina wire might be the next beautification step. Homeland Security grant maybe? $$$$!
Posted by EvilElf at 11:19 AM 2 comments: 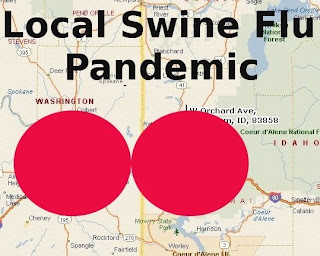 Yesterday was a treat. Many of our calls were from people who had worked themselves into a fine swine flu mindset - thanks to our news media. I suspect, had the news reported the symptoms of H1N1 manifest as broken legs, we would have had ran out of leg splints by lunch.

The swelling news theme music and awesome video effects made me want to join the parade too, but it seemed like a lot of work.

When KXLY showed a map of suspected flu cases in the Inland Empire, there was one red dot on Spokane and another on Coeur d'Alene. They made the dots three times the size of the actual cities themselves. So large were they that they touched and formed a set of red Double-Ds straddling the border.

Yes, this flu is newsworthy and it's great to look for the local angle. But, as I have noticed many times in local reporting, there is an overriding narrative, and once they decide what that's going to be, facts contrary to that predetermined narrative are excluded from the story. It's called "branding" in marketing. It helps simplify the message. It's containable. It's comfortable for the consumer. It is terrible news reporting. In fact, it is terrible story telling. I can't imagine reading a novel or watching a movie that would be so blatantly unnuanced. It's dull. Most importantly, it's not telling the truth.

Case in point. Yesterday, we kept hearing about the death of the child in Texas - how she was SHOPPING AT THE MALL and fell ill. We never heard that this child was from Mexico and was brought to Texas from Mexico for her treatment (and, unfortunately, ultimately to die). What about the 168 dead in Mexico from this flu? Well, a couple of days ago, the number was revised to 12. Not a lot of news around this. Why? Because it doesn't fit the predetermined narrative/branding. And the stories from the local school that was not going to shut down because there was no threat were bizarre. This flu is proving to be about the least deadly and least transmittable of any flu we've seen in years. Now, there's a story. Also there's a story in how all these agencies are seamlessly working together, even if this is a nonevent. It's good practice and great news, and especially welcome after eight years of debacle.

I feel sorry for some of our local reporters. Sometimes when they report a story, they look like they are being held hostage. Other times, they look like they know the story is a joke, and they are doing all they can to keep from laughing. I don't envy all the work and stress these folks have had to endure to get where they are now, only to report on "Office Christmas Party Tips"*

If there were a station that had local news for adults who want to become informed, I would tune in every night. Five minutes for sports. Five minutes for weather and the rest of the time could be spent educating on local politics and issues.

When I was a kid (old man rant), the news sought to educate. We were all thankful that we learned something after watching. Now, I think the "news" has to make people feel secure in their bias and their ignorance, or else viewers will feel angry and turn the channel. Some of us wouldn't. How about you local disgruntled reporters and execs teaming up to give Spokane one-half hour of news every night that is truly news?

*OK. Office Christmas Party Tips. This one was on a few years ago. The "news" story lasted about five minutes. Had graphics. The whole enchilada. What were these tips? 1. Don't drink too much. 2. Dress appropriately. 3. Remember to mingle. I don't think they even had to consult wikipedia for this segment.
Posted by EvilElf at 12:30 PM 3 comments: