Ditched the bike this morning and walked instead. I had to leave about an hour before I wanted to be at work (3 miles or so). What a great morning!
As usual, Spokane shines in the early morning. The river changes a lot. You will never really see this stuff from behind the windshield of your car.

On a bicycle, you have to stop sometimes to really see it too. But like riding the bicycle in the snow, I never got stuck, never t-boned another pedestrian/cyclist, never had to be pushed, never became high-centered, never got pissed, never had to wait for the heater to kick in, never had to fuel the tank, never had to scrape my windows. Best of all, my IPod is a much better sound system than my car's! 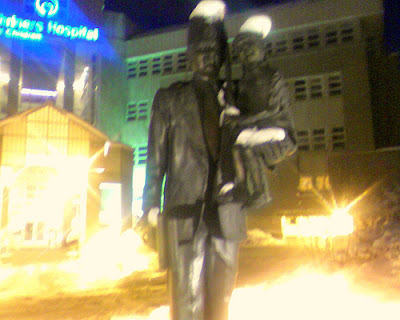 The Shriner was looking quite feztive. 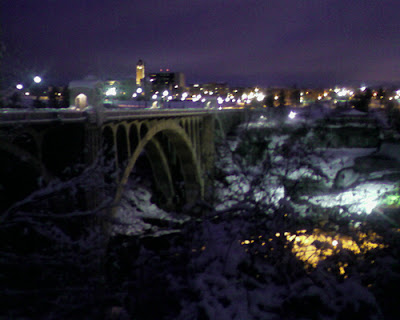 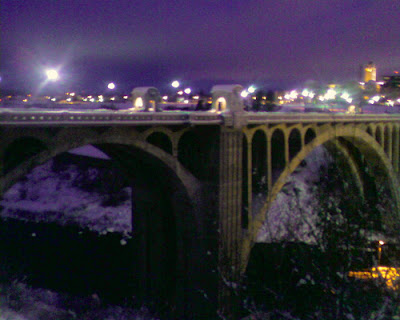 When I was walking up Monroe, the snow on the ground looked very blue with lighter blue sparkles - kind of like a blueberry-flavored breakfast cereal. I looked around for a neon light that might have been doing this, but it was just the morning sky. Wow. Grows our crops. Holds up airplanes. And now it turns the snow blue. Sky - you are too much! 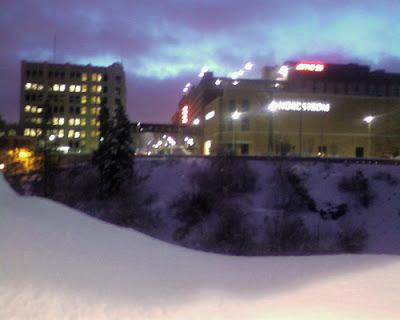 A source of controversy at one time, now look at Riverpark Square. It looks so innocent when it's asleep. 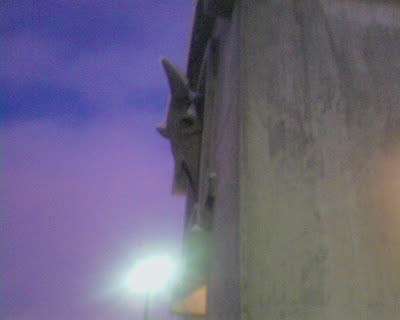 One of many cement warning symbols posted on the Monroe Street Bridge. Strange that none of the usual guardians of morality protested these horned skull adornments. 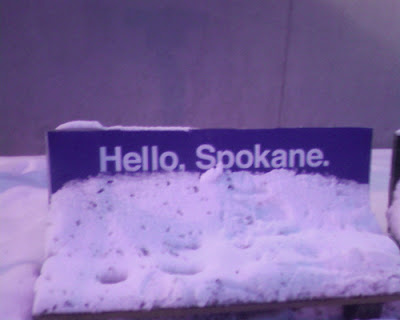 A cheery greeting to bus passengers this morning.

So, if you want to get out there and enjoy the beauty of the snow in Spokane, you better hurry, there are only a couple of more months left!

Thanks to the contributor who sent me this pitch that he had made to the Spokesman-Review a year and a half ago. Apparently, it went nowhere. Maybe that's for the best! 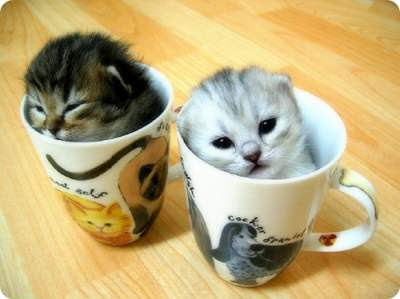 Dear Editor - Mr. Smith, if that really is your name,

The same thing happens to me time and time again. I open the S-R, and it’s like looking into a reflection of my own heart.

The debris of personal memories from one of your writers is often an emotional-beachcomber’s delight! The commonplace becomes a rare gem, and a spiritual touchstone.

Us moms are protective of our kids, much like a mother bear.
I had a crazy uncle that drank too much.
Clothes smell better when washed.
Cheese and me.
I wish I had stuck with French in college.

I think there is one thing missing from this emotive oracle. How about letting a male have a shot, once in a while, in sorting out the self-reflective silage?

I humbly submit my first column. I have some good working names for this endeavor. In the past, I've made a living as a professional writer. I have never missed a deadline!

Please, let me know what you think!


Yes, something was wrong with the lunchbox. Maybe there was something wrong with me, too. I gently dabbed the pieces of milk-sogged salami. Their white wetness reminded me of the tears I was now fighting back.

The first day of school, so many years ago. My oldest son, Kurtz, had been gifted with a lunchbox that I had made as a woodworking project. It was, according to my counselor, a project that would help me with my anger and abandonment issues. However, this labor inadvertently caused me to pass these issues on to my son, via ¾ inch plywood, one hinge and still-sticky varnish. It was this varnish that held his lunch fast within the box. As he told me later, most of his classmates enjoyed the chips in their lunches, while he had to chip his entire lunch out of the therapy-project-lunch-container.

He later said that what I had actually built was a coffin for his self-esteem. The next year was to be different.

The cartoon show “Transformers” was very “in” then. So, I knew Kurtz, now in 8th Grade, would appreciate the new lunchbox I had just crafted for him. It was metal - a silent protector I could send with my son, as he faced the perils of middle school. And like a cartoon Transformer, a twist here and a push there transformed the steel lunchbox into a metallic robot crab - complete with ersatz gun barrels where the claws should be.

It took a few times for Kurtz to get the hang of transforming the box into the crab. When I was satisfied with his performance, I bequeathed him with the lunchbox, along with the knowledge of what it was, and an assurance that it truly was his!

He seemed worried. But, wasn’t there just a glint of joyful pride in those soulful blue eyes of his? “Yes, MY dad made this… For ME!”

I didn’t know about the strict code of “no firearms” in middle school. And apparently, the crab claw gun barrels fit the description.

Kurtz was waiting for me, in the principal’s office. As we walked to the car, I couldn’t help but notice a stream of milk pouring out of the now-bent and irreversibly-stuck crab claw barrels. Apparently, a student panicked at the sight of the transformed crab gun and instinctively disarmed it with a container of milk. And with a pack mentality, other students joined the milky shelling of the metal crab. Kids can be cruel - even more so, when frightened.

That night, after I dried the lunchbox and my eyes, Kurtz and I had a very good heart-to-heart. I was to pack his lunches in a brown paper bag, from now on. As Kurtz pointed out, a neat lunchbox is nice - but lunch is even better.

He had given me food for thought.
Posted by EvilElf at 2:35 PM No comments:

Mister Yuke puts the word out! She's back!! 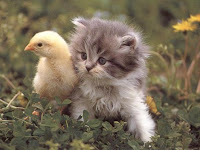 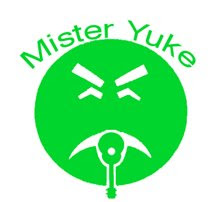 Cheryl-Anne Millsap that is...

A week or so after Mister Yuke released his epic Millsap Monday ballad, Cheryl-Anne's column went MIA. No explanation. No "she'll be back next week." Nothing. Then her column returned. And it was completely different. No stories about her kids. No advice for the masses derived from her personal ponderings. Her first column out of the chute was even somewhat ribald. She did seem to be still making up stories, but they were now about "friends" not family, not herself.

Weeks ago, as Mister Yuke was filling me in about this turn, he didn't seem the least bit concerned. I reminded him that if she kept up this tactic, his work would be invalidated. He just laughed. "She can't help herself. She'll be back." His confidence was somewhat unnerving.

He called up this morning. "Did you read it? I told you! Gawd, I wish I had bet you some money. Hah!"

And I picked up the paper and he was right. So here it is again. You can hear the song by clicking the title above. You can read her column by clicking here.

I hope this will satisfy the ukulele playing fool and shorten his gloating hangtime.
Posted by EvilElf at 8:14 AM 2 comments:

Try staying in a wheel trail and that trail soon turned to a mixture of water and slush with a floor of ice.

Get out of the rut and it was very deep snow. I wound up having to push the bike up parts of the south hill simply because the back wheel would spin without gaining purchase.

Thirteen inches on the picnic table at home - and counting,

Also Ike and his buddy Nick were filmed and interviewed by the S-R about the fortifications they were completing. We were without power for a while this afternoon so these fortifications could have come in handy. 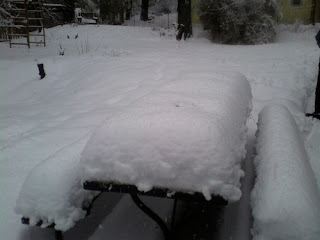 Posted by EvilElf at 2:55 PM No comments:

Why would you not want to walk? 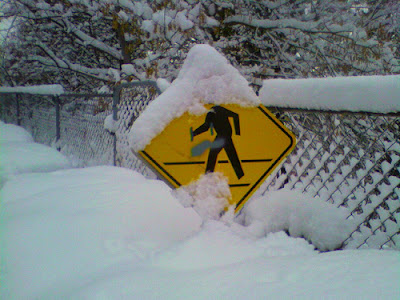 Just got back from Downtown. Watched cars sliding into other cars. Some folks were stuck - unable to move their cars out of the snow which enveloped them overnight. Then there were the ladies who alternated their glassy stares between the tire chains tangled in their hands and the white mound that was their car, waiting for something magical to happen.

But on foot, the snow is magical. I would say that I am lucky to live where I do, that I can access my work, great restaurants, the grocery store, movie theaters, bars or almost any other place I want to go by foot or by bike. I would say it's luck, except my wife and I made a conscious decision to live here for those very reasons.

Not that the city makes it easy for pedestrians or bicyclists. The number one job of the city is to make sure that drivers are not inconvenienced, so much so that it is very convenient for drivers to live out of the city!

I still drive a little. Not much. Mostly I bike. Every once in awhile I kind of get the itch to live in "the country" again. So, I can sure empathize with those who make that decision - for whatever reason. I wonder if I was making car payments, if I would be more inclined to drive. Probably.

But, if you live in the city and can leave a little early to be where you need to be, and want to have a fun time, get great exercise, enjoy the fleeting beauty of this snow and have a little adventure - walk.

I wear YakTrax on the bottom of my shoes - I have never slipped on the ice or in the snow wearing them. 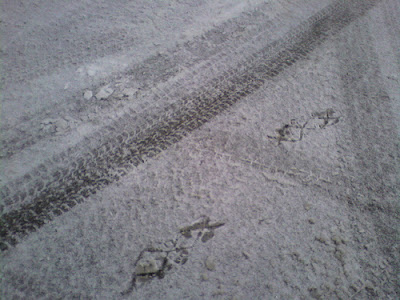 In my line of work, I have seen broken ankles and dislocations this winter, so be careful. But, I must add these injuries have all occurred to people getting into or out of their cars! Plus, they don't compare to the injuries people have been receiving whilst driving their cars.
Posted by EvilElf at 1:22 PM 4 comments:

A very nice person gave us these snacks. For fruit bars,they tasted pretty good too.

As you can see, there are a lot of ingredients that go into making something like this taste so darn good. I was surprised to read the secret ingredient on the last line, however. They were kinds chewy, come to think of it. 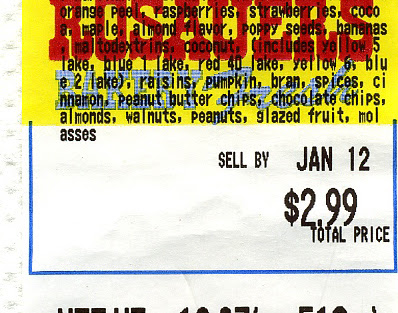 Posted by EvilElf at 9:34 AM No comments: