DO NOT TAKE A SHOT EVERY TIME I SAY "UHM." If you do, you might empty your liquor cabinet.
Posted by EvilElf at 9:19 AM No comments:

Posted by EvilElf at 1:09 PM No comments:

Posted by EvilElf at 3:22 PM No comments: 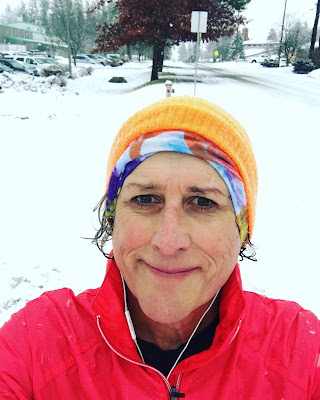 This seems like a no-brainer. Running builds your endurance, creates stronger muscles and gives you discipline and resolve. Duh.

I have used running to strengthen myself for many transitions in my life: Starting college, Before USAF OTS, Starting a graduate degree, A new job in advertising and in The Fire Academy when I was hired by the Spokane Fire Department at age 39. I upped my mileage or became more intense in my running for all of these transitions. But, I kind of forgot about it when I started my transition from male to female. My bad.

Last week, I ran 11.5 miles in a slushy snowstorm. Yesterday I ran 13 miles. It was a bitch. But, if I keep this up, my endurance will increase and my muscles will becomes stronger. Whatever happens to me at work and in my private life will certainly also benefit from the effects of increasing my discipline and resolve.

But here’s the thing, in order to get truly stronger, I have to become weaker. There’s no way around it.  After the 13 mile run, my legs were spent, my wind was gone, my brain fried by the time I finished this slog. If you had hit me with a snowball on my last hundred yards, I would have went down, and I might still be laying there.

So, it’s a bit of a paradox and it reminds me of the adage of my old employer - Strategic Air Command - “Peace is our profession,” and the philosophy of "Peace through strength." I would revamp this a little to now say “Peace through Strength through Weakness.” And to get to the heart of why I say this, I would like to share something a little personal with you.

I have been going to counseling for the transgender stuff for almost two years now. I really like my shrink. Her methodology reminds me of what I was taught in my pastoral counseling classes. Don’t lead the patient. Let them discover what they might discover on their own. Be a reflective listener. All this she does and she does it well. She never pushed me one way or the other in any of the decisions I have made. And I think that this has let me own what I already knew - that I am a transgender female.

One day, I really wanted a little more direction from her. I had been telling her how someone who is very close to me said something hurtful to me and my reply was “OK.” I also told her how people at work will often say “I want to ask you something, but I don’t want to offend you.” My reply is always “F@#K you. Go ahead and try to offend me. You can’t.” Toward the end of the session I asked her if there was anything that I should be thinking about until our next visit. She said that she found it interesting that I didn’t have any feelings about the mean thing that was said to me and that I actually seemed to invite offense from my brother and sister firefighters, just in order to ignore it. She asked why that was. My response was “Because I want to win. I will never let anyone ever control my emotions. I would never give them the satisfaction.”

I related how in firefighter culture there is a low disregard for someone who has buttons to push. And if you do have a button to push, it will get pushed continually. I gave her an example of when someone had tried to egg me on by saying something atrocious and very offensive years ago. My response to them was to not get angry but take it to the most extreme level of offensiveness. I grossed them out with my words and they had wished that they had never started anything. In other words, I won. It wasn’t lost on me that, in my younger days, I was a B-52 bombardier and was quite adept at dropping nukes. My counselor thought about this and concluded our session with an “I would spend some time thinking about this.”

I did. And in response, I began a conscious and methodical process of letting down some shields, of breaching a few walls. I have allowed myself (at times) the ability to feel hurt. In doing so, I look back to childhood to see that I have always embraced stoicism. My mom is and was pretty stoic, pretty cool. It was my dad who was the emotional one and usually not in a good way. I had always vowed not to be like that. And it served me well. It made me strong. Or so I thought.

My new fledgling ability to feel hurt, to feel slighted, to feel embarrassed, to feel sad, etc. has not been easy for those closest to me. I am no longer a cement sounding-board, or well-disciplined whipping girl. If something seems like it should hurt me, I let it in (except for at work ‘cuz that ain’t gonna happen). I now try to feel the impact and to be honest about how that feels. This is as hard for me as it is for the one to whom I now say, “That was mean. You hurt my feelings.” Even typing this right now was hard, and makes me feel vulnerable to attack.

Running to become weak to become strong to know peace has made me think a lot about this. Is there more strength that will come to me if I honestly deal with how I feel about something, by first allowing myself to feel something? Running long distances says that there is. I guess in order to be emotionally strong, you have to do the work, and part of doing the work is feeling every step of every uphill mile when someone puts them in front of you.  That’s my theory anyway. We will see.

Running makes you truthful and strong.
Posted by EvilElf at 11:27 AM No comments:

Posted by EvilElf at 2:34 PM No comments: