While preparing to transport my leaf blower, it occurred to me... 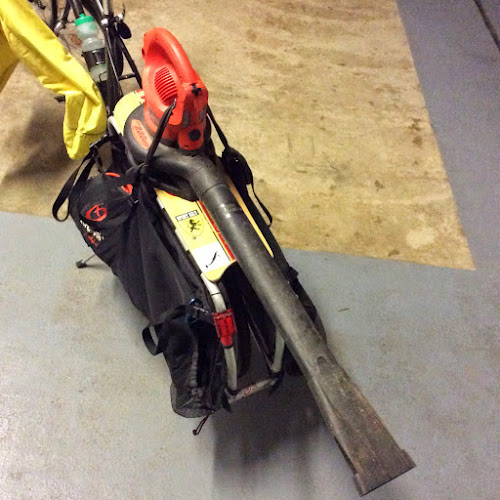 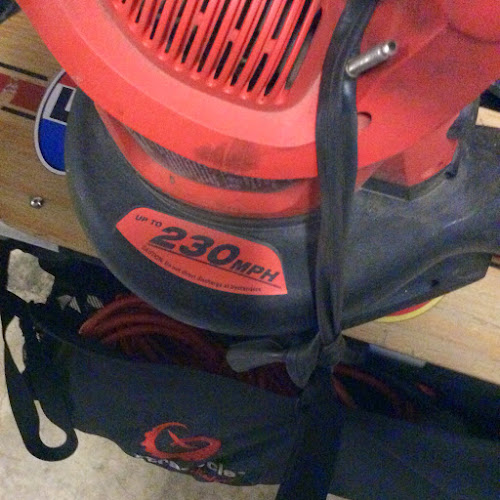 Posted with Blogsy
Posted by EvilElf at 3:16 PM No comments: 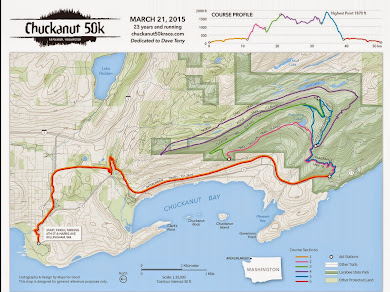 Like a carrot in front of me, Bellingham's Chuckanutt 50K kept me training all through the winter. I put in big miles with lots of hills. Some days I just ran up and down hills for hours. I had a circuit with three major hills and I just repeated it over and over again.
On the way to the coast, with a stop at UW to visit Aidan and his girl friend Natalie, I could feel myself getting more nervous. Why? It wasn't like I was going to win this thing and I was pretty sure I would finish under the allotted eight hours. I expected Sarah to beat me. She has been faster than me lately. I guess I was anticipating that it was going to be hard, and it was. 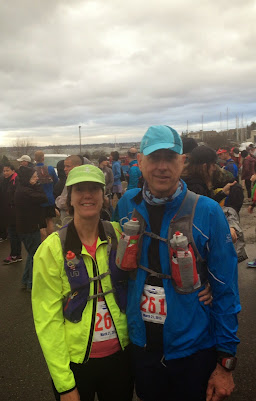 The start was windy and rainy with temps in the high 40s. Most of the runners had jackets and tights on. I knew this would be too hot for me so I took off my rainshell right before the start and wore shorts, arm warmers, a buff on my neck and a baseball cap. I also had fluorescent orange compression calf sleeves. These solicited a few laughs and some "those are great socks" fromothers. I informed them that "they were gifts."
Once we got onto the interurban trail, into the trees, everything warmed up. After six miles there was a fast turn into a heavily wooded area. The first series of a long climbs started. Luckily, I had surrounded myself with people who walked up steep hills. Good idea. I started looking forward to hills just so I could walk instead of run. Some were so steep that we basically crawled up them. In my backpack I had my two bottles of water, one with electrolytes, some gels and protein bars, a change of socks and a shell. It was an extra 10 pounds I probably didn't need. Never touched a gel. At one point I was going downhill, fairly fast, still well under control, and I hit one of the early patches of mud which slid me toward a precipice. My feet took hold right before the plunge. At that point I was grateful that I was also packing a lighter, a survival blanket, a knife and a cell phone.
This first mud patch was a small harbinger of an overarching theme for the run.
There was a trail that went atop a crest. It was foggy and dark with some wind. I had to really watch my footing. Coming down off of this crest, I picked up speed, made a turn, slid out on mud and fell on my side. I heard others gasp. The fall was a cheap chiropractic treatment and I felt more limber than before. Later in the race, Sarah and I both heard a blood-curdling scream. It turns out a runner fractured her ankle and had to be carried out. Her two requests from her rescuers? A down jacket and a helicopter! 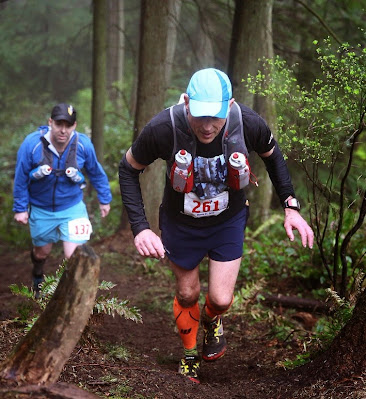 Ike said it had not rained in Bellingham for a while, so the inches of rain received the day and night before the race steeped into the dry dirt and made some amazing mud. Some places, the mud was so deep it threatened to suck the socks and shoes off your feet. In other areas, it was a gray mire that smelled like a cow pasture. One long juncture, there was a forest service road that rose at a steep incline. Each step forward resulted in a sliding back almost the entire length of the step. Moving over to the side would help a little. Your best bet was to head for standing water. That was a sign that there was firm ground underneath because the water couldn't seep through. I admitted to another runner, who was also slipping her way up the hill, that the stretch seem to be a little demoralizing. At the top of the hill, I saw a small sign saying "chin scraper." I knew chin scraper was toward the end of the mountain stage, and at the sign we headed steeply down into another forest with tangled switchbacks. It was a long way down. At the end was an aid station where I picked up a piece of peanut butter and jelly sandwich. I stuffed most of it in my mouth and surprisingly started the steepest climb of the route. I guess this was the actual chin scraper, which makes sense as runners clawed their way up the steep terrain. I shoved the rest of the sandwich in my pocket next to a half-eaten energy bar. I was 20 miles or so in and I was starting to feel a little sick. I led a pack up the hill and when it was time to fly down the hill, I said "after you." I was slowing down.
At the mile 25 aid station, Ike was waiting for me and Sarah to cheer us on. What a wonderful sight! It really buoyed me for the next 6 miles into the finish line. Sarah was just six minutes behind me. What a great feeling to finish. We hit the shower in our nice hotel after trucking in copious amounts of mud and detritus. 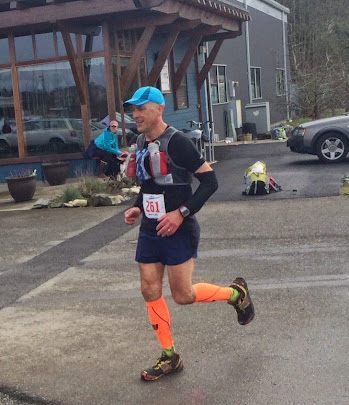 A great pizza dinner, beers and a bath made both of us feel better. I didn't sleep well that night though. My legs hurt. In bed, my mind was still racing. My eyes darting around for the next place to put put my foot on the trail, and my face was still smiling. Would I do it again? Hell yeah! 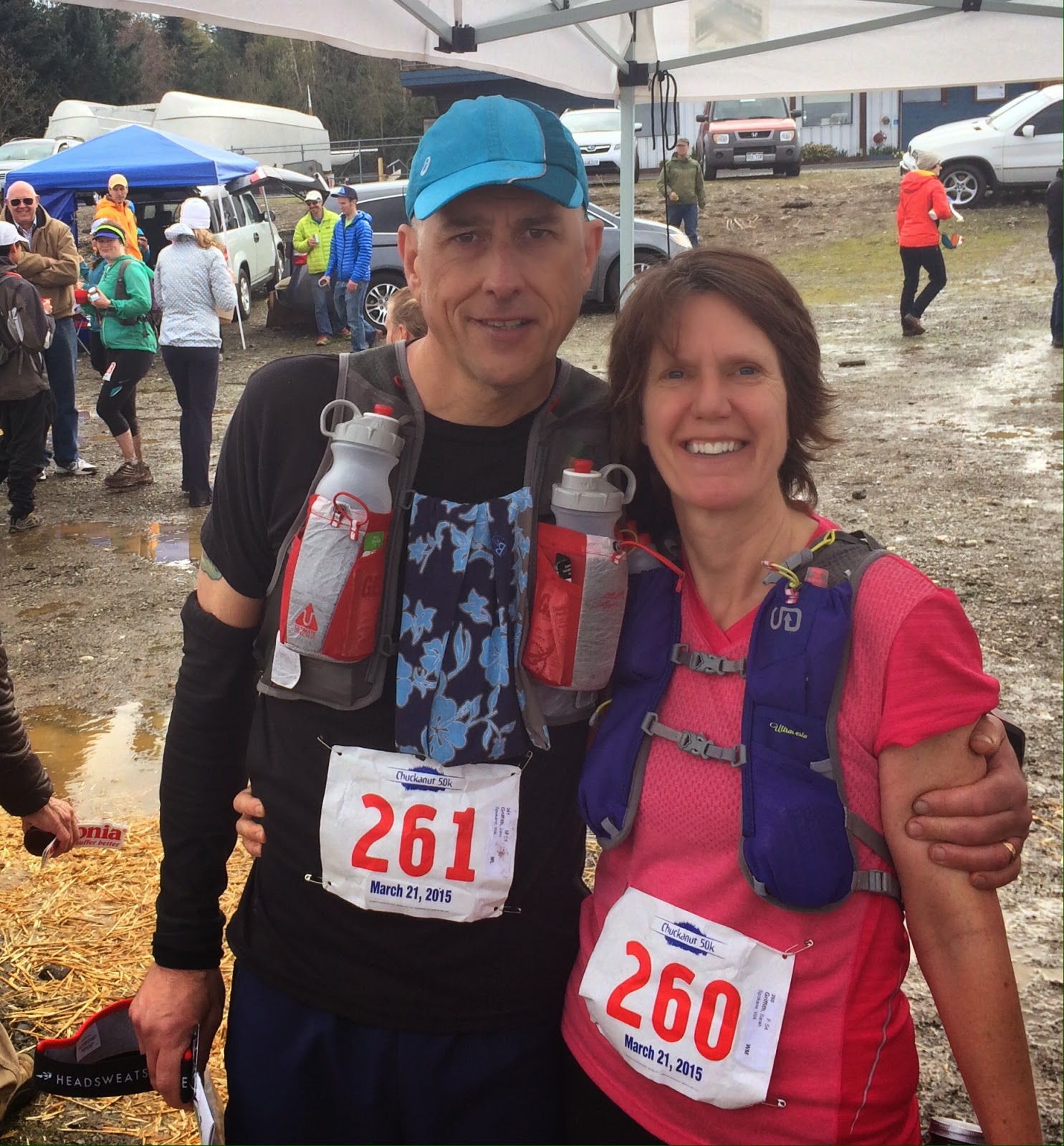 Posted with Blogsy
Posted by EvilElf at 3:33 PM 2 comments:

They only stayed for an afternoon, but were fun to watch.

A nice article on the Brew Run Run!

Can be found here. 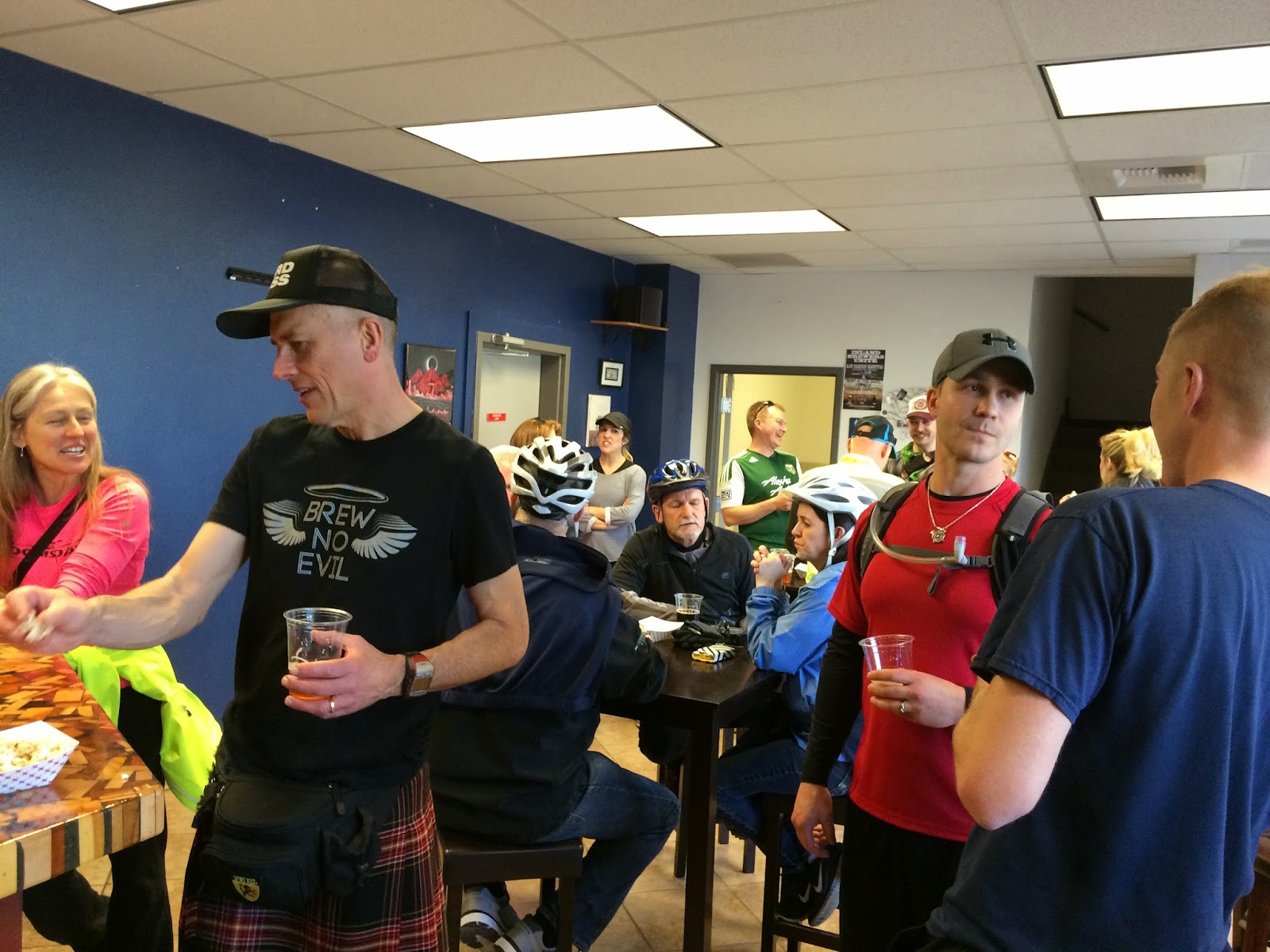 Thanks Rick!
Posted by EvilElf at 12:21 PM No comments:

The brew run run was a great success. There were about 15 of us at the starting line I think. We picked some more up along the way until we were about 25 of us or so. The weather was perfect. You can look at the pictures and see that everyone was having a very good time. We started a little after one and we were finishing up dinner after eight.

I woke up last night with a smile on my face thinking about how much fun I had. It was hard getting back to sleep. It was like I was really excited for something that had already happened.

It was a good mix of bicyclists and runners. There was even some Uberist activity. We will have to do it again in the summer. In the meantime, anyone can do it as long as the breweries are open, the thirst is abundant and the legs are working.


- Posted using BlogPress from my iPad

Posted by EvilElf at 2:17 PM No comments: 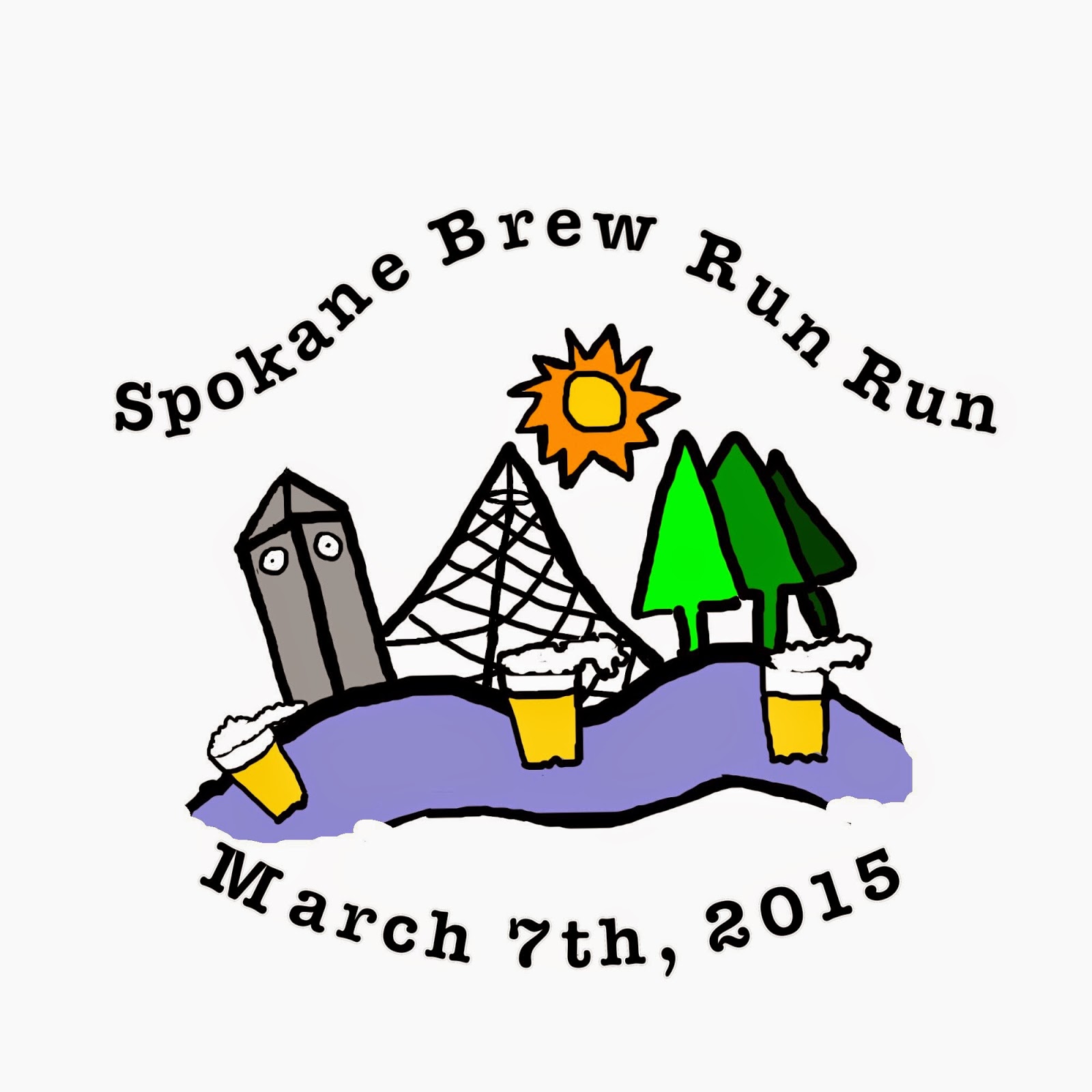 This design is an adaptation of something you probably have seen before, especially if you run the streets of Spokane. Can you guess where it came from and what's different from the original design? No fair, if I have already told you where it came from!
Posted by EvilElf at 9:57 AM 1 comment:

Springtime in the basement... 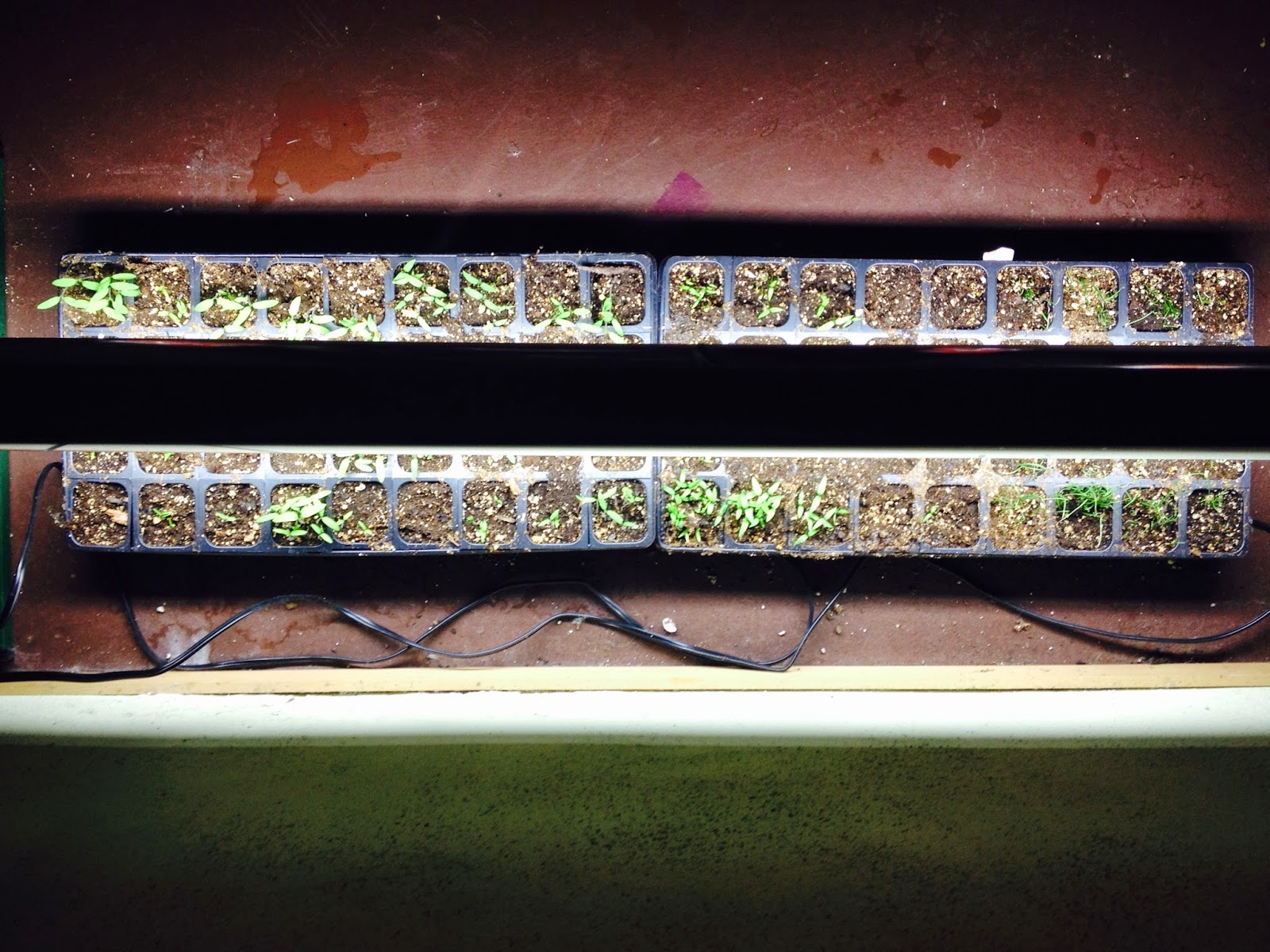 Onions, peppers, tomatoes, eggplant. All have sprouted.
Posted by EvilElf at 9:23 AM No comments: