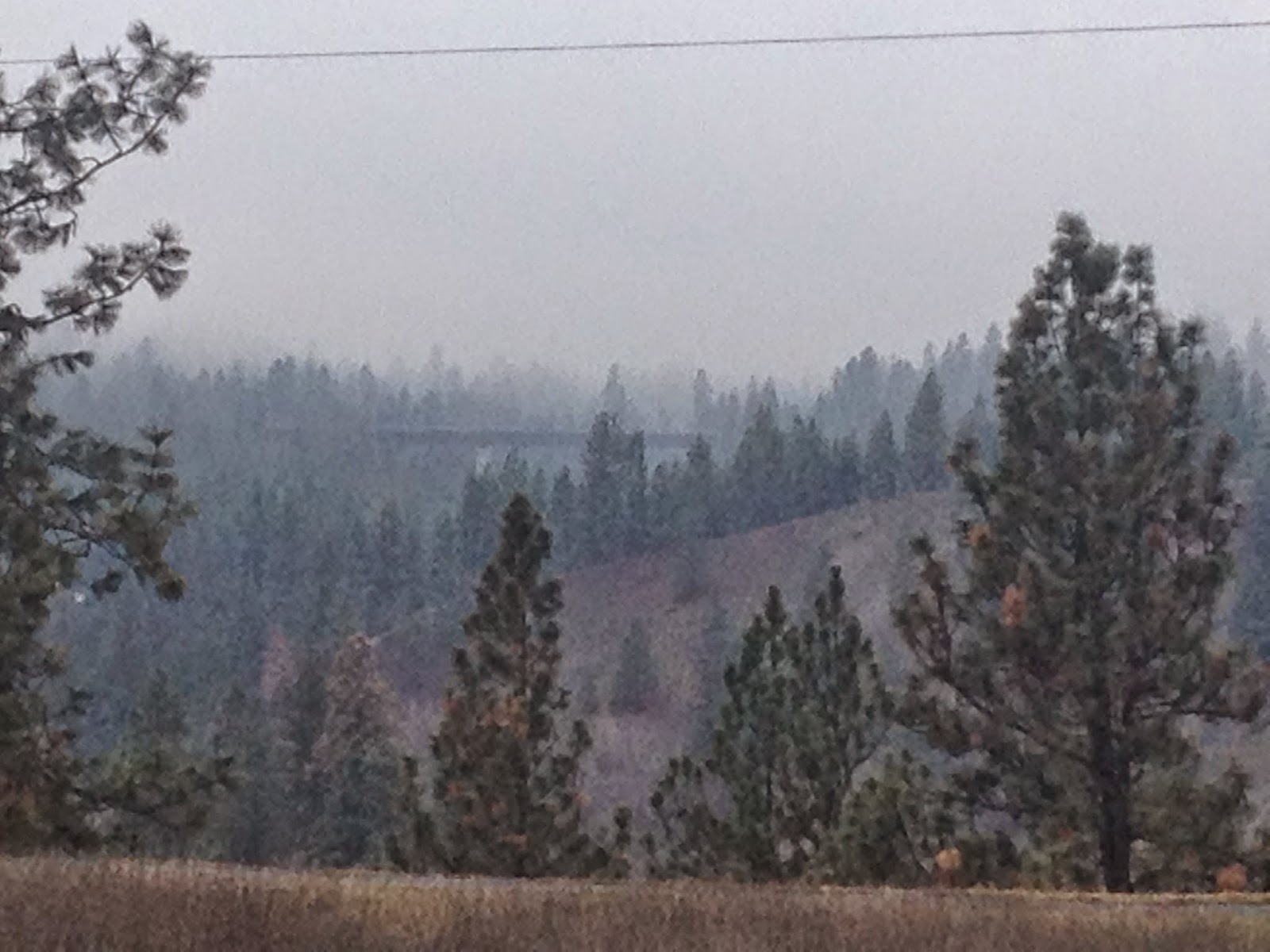 I have been enjoying the fog while running. It makes things a little more mysterious and interesting. Just what you need for long runs.

A few days ago I took this picture while out on a 12 miler. The Centennial Trail was completely clear of ice until crossing under TJ Meenach Bridge. Then it became a very slippery path. I finally got off below SFCC. This morning I ran home from work. There were occasional icy spots on the pavement and sidewalks. Some sidewalks were more icy than others. For some reason, really new sidewalks are a lot icier than old ones. Maybe they are still in the process of losing moisture still - months after their pour.

I need to get another five miles or so in today. I am using the weather as an awesome procrastination tool. Not near icy enough to warrant spikey galoshes. I will wait as long as it takes or until I am too hungry.

Stairs Appear in a Hole Outside of Town 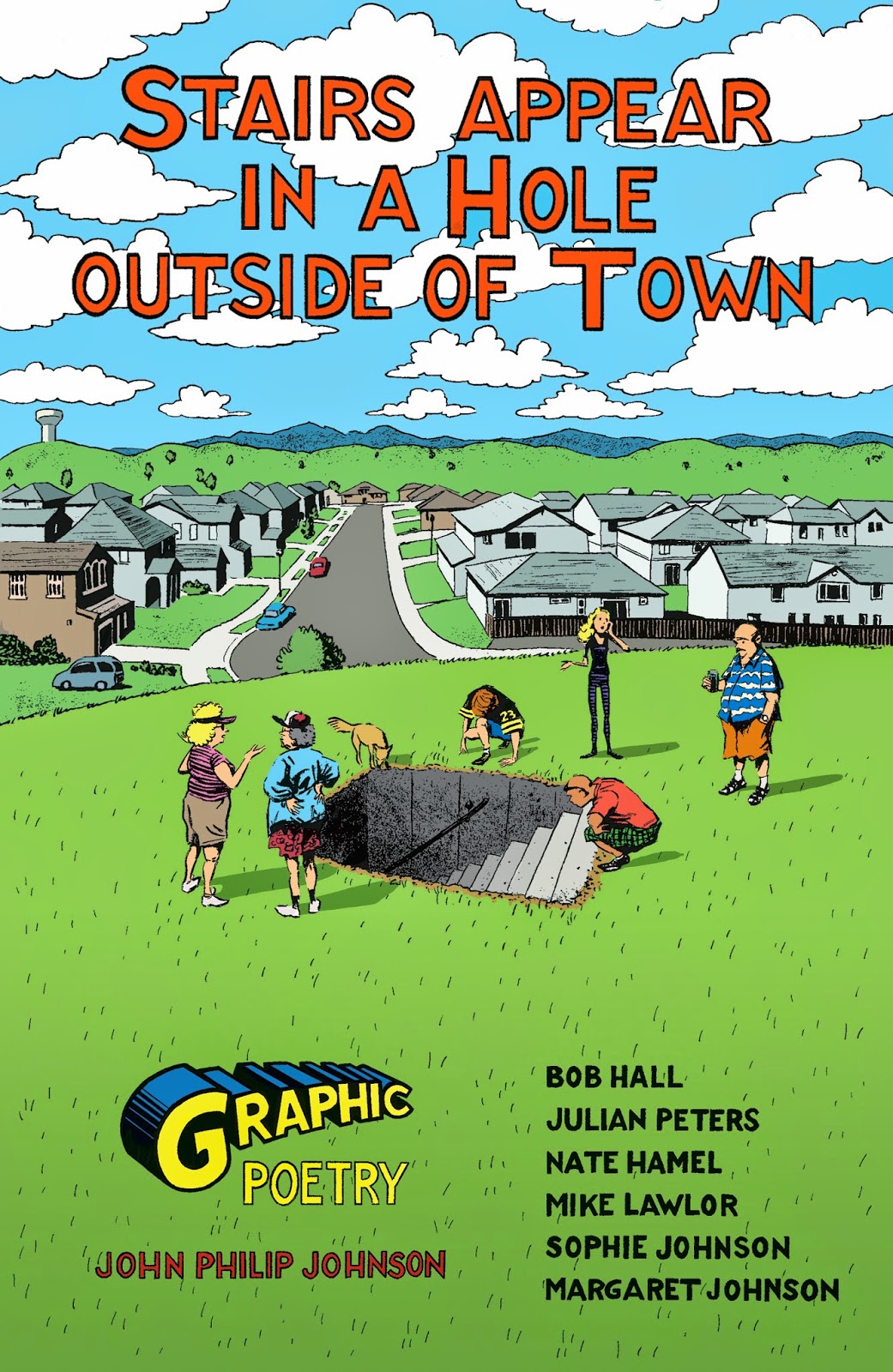 The best feature in the The Spokesman-Review is the poetry column which appears every Sunday. When it comes to poetry, I've always been a fan and, sometimes, a willing participant. Last year, there was a great poem by John Philip Johnson in the SR. Here it is:


She kept its bones in a glass case


next to the recliner in the living room,


and sometimes thought she heard


but if she stopped to listen, it disappeared.


Likewise with a nuzzling around her calves,


she’d reach absent-mindedly to scratch him,


but her fingers found nothing but air.

One day, in the corner of her eye,


slinking by the sofa, there was a shadow.


She glanced over, expecting it to vanish.


But this time it remained.


She looked at it full on. She watched it move.


Low and angular, not quite as catlike


as one might suppose, but still, it was him.

She walked to the door, just like in the old days,


and opened it, and met a whoosh of winter air.


She waited. The bones in the glass case rattled.


Then the cat-shadow darted at her,


through her legs, and slipped outside.


It mingled with the shadows of bare branches,


and leapt at the shadow of a bird.


She looked at the tree, but there was no bird.


Then he blended into the shadow of a bush.


She stood in the threshold, her hands on the door,


of her house dress, and she could feel


her own bones rattling in her body,


her own shadow trying to slip out.

I really liked that!

If you've ever read any of my fiction or attempts at poetry, you know that I enjoy stuff that's a little spooky and a little weird and, hopefully, beautiful at the same time. This poem did it for me.  I researched and found that Mr. Johnson had a kickstarter campaign to raise funds to put out his poetry in an illustrated fashion. I sent in my $7 and eventually received two full-color comic books of his poetry and some cool schwag. This was a lot more than what I was originally promised. I also received a PDF for my Ipad.

A couple of years ago I did some water colors and then hand printed "poetry" on them. Something cool about spending a lot of time painting something only to risk destroying the whole thing with a quick misspelling. I know that these professional illustrators weren't at risk of destroying an entire page of work when hand printing the prose. Yet when I read the hand printed poetry on top of the beautiful artwork, I still feel the risk involved.

You can check out John's website here.
Posted by EvilElf at 11:21 AM No comments:

Email ThisBlogThis!Share to TwitterShare to FacebookShare to Pinterest
Labels: John Philip Johnson, Stairs Appear in a Hole Outside of Town

In case you missed it, The Road Runners Club of America acknowledged Spokane as the Outstanding Runner Friendly Community of the Year.

That Spokane is at the top of the charts for running is probably known more by running fans who live outside of Spokane than those of us who live here. I mentioned four years ago that, at Nike Nationals in Portland, the sports announcer noted how Spokane continually qualifies more runners for Nationals than any other city - from anywhere. He called Spokane the "Rift Valley of Running." In a cross-country running magazine, an article suggested that if you have a high school girl who wants to do well in x-country, she should go to high school in upstate New York. If you have a boy, he should go to high school in Spokane, Washington. Pretty amazing.

In some other parts of the country, one never has to worry about ice when out for a run. Here in Spokane, it's a worry for most of us for a good portion of the year. So much so, that many stay indoors to use treadmills once winter hits. Yuck. I have to admit, that when Ike (my son who runs for WWU) is home for Christmas break, he never worries about the ice much. He just keeps running as normal. And he never falls down!

I hate treadmills and I really like being outside. I run year-round, as does Sarah.  Running is, for me, more of a mental health thing than a physical health thing - especially in the winter and spring. 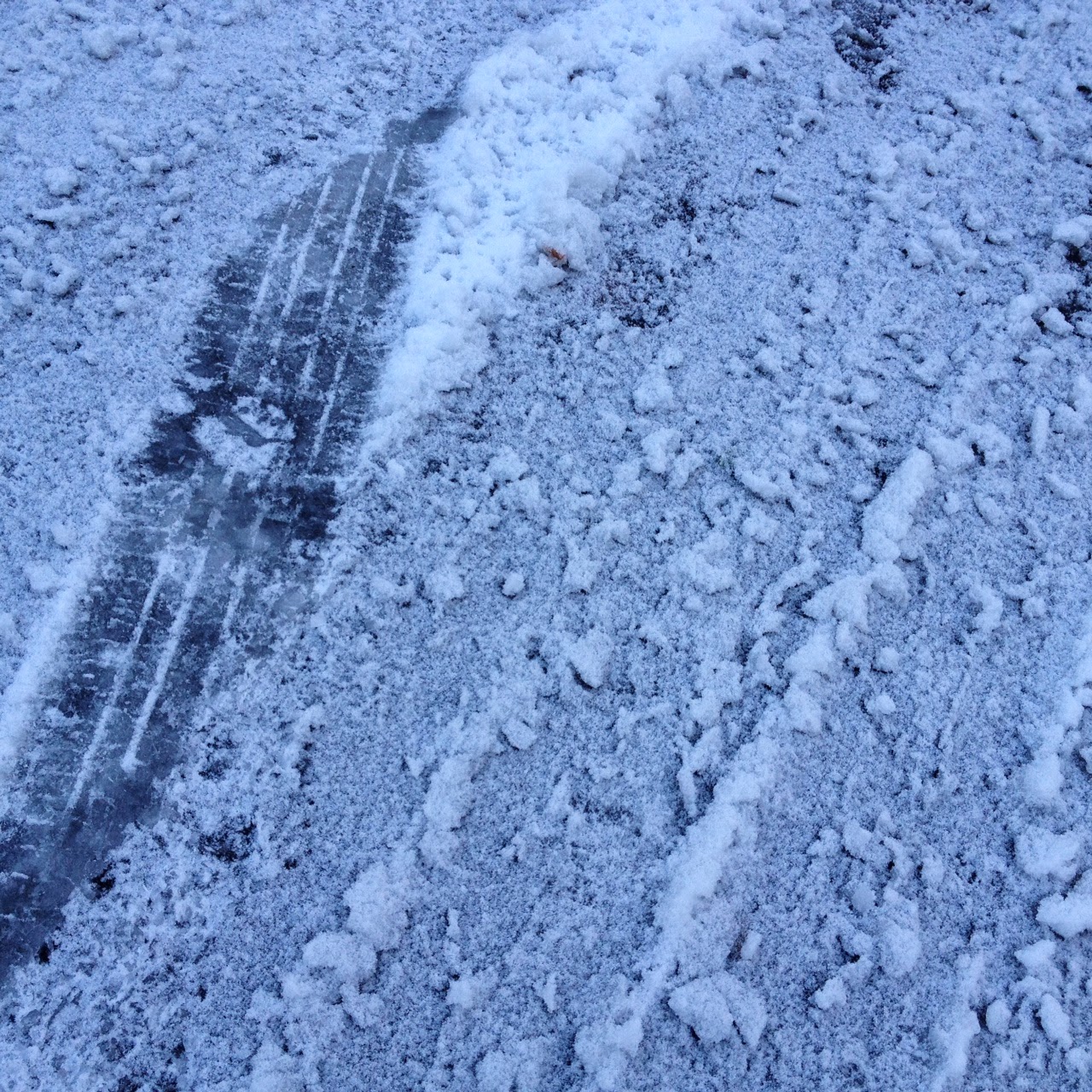 Today, was a very slippery day with freezing fog coating everything. But, as usual, I stayed upright and slipped very little due to my Due North carbide spikey galoshes. I've had these things for at least five years (if I wasn't so lazy, I would do a search of my blog to verify that). I bought replacement carbide tips, thinking they would wear out or become detached at some point. They never have. They beat YakTrax on the ice by a long shot. In the snow, they do well too. 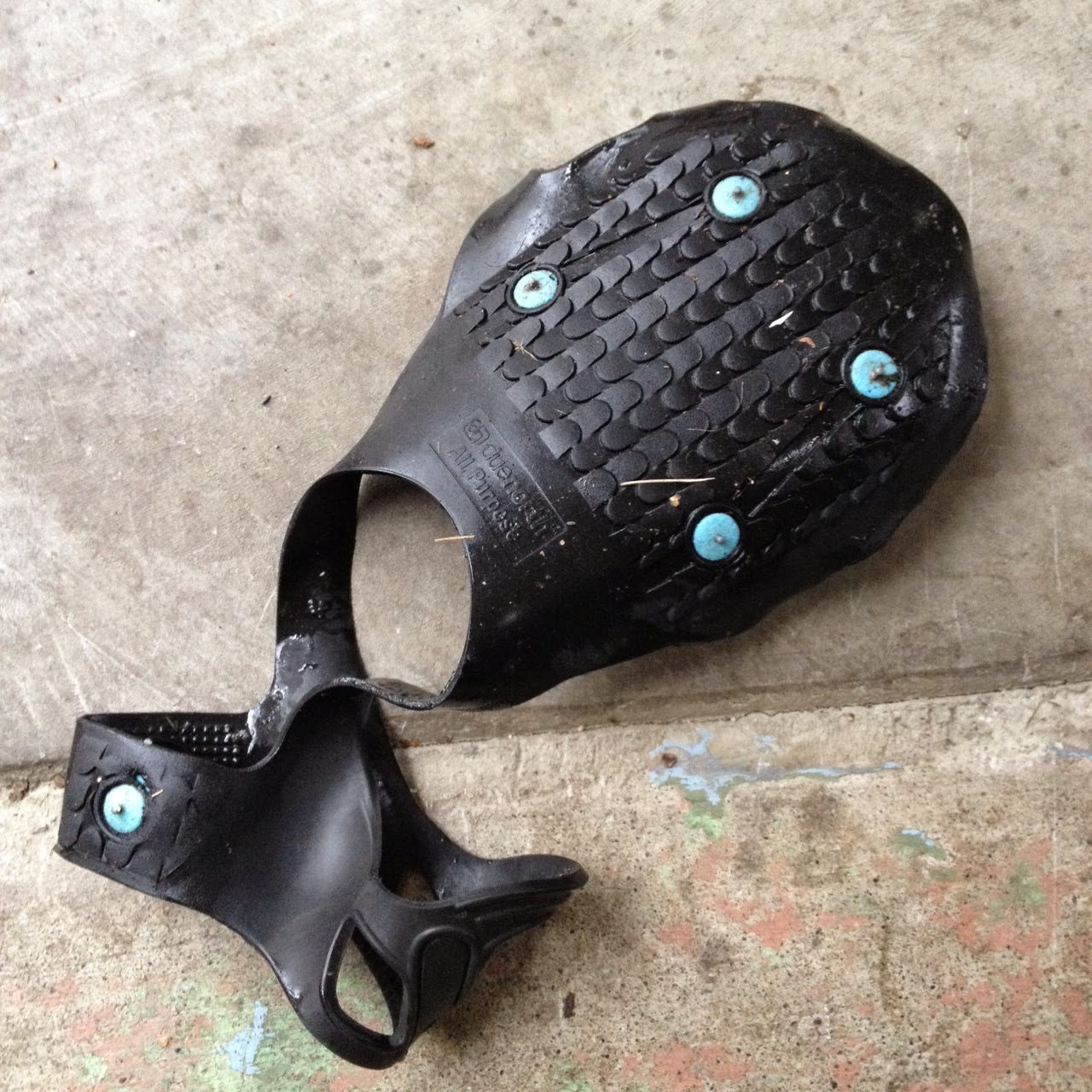 I run with these things probably three months out of the year. I can't  recommend them enough. They are a lot cheaper than a treadmill and a lot more fun. 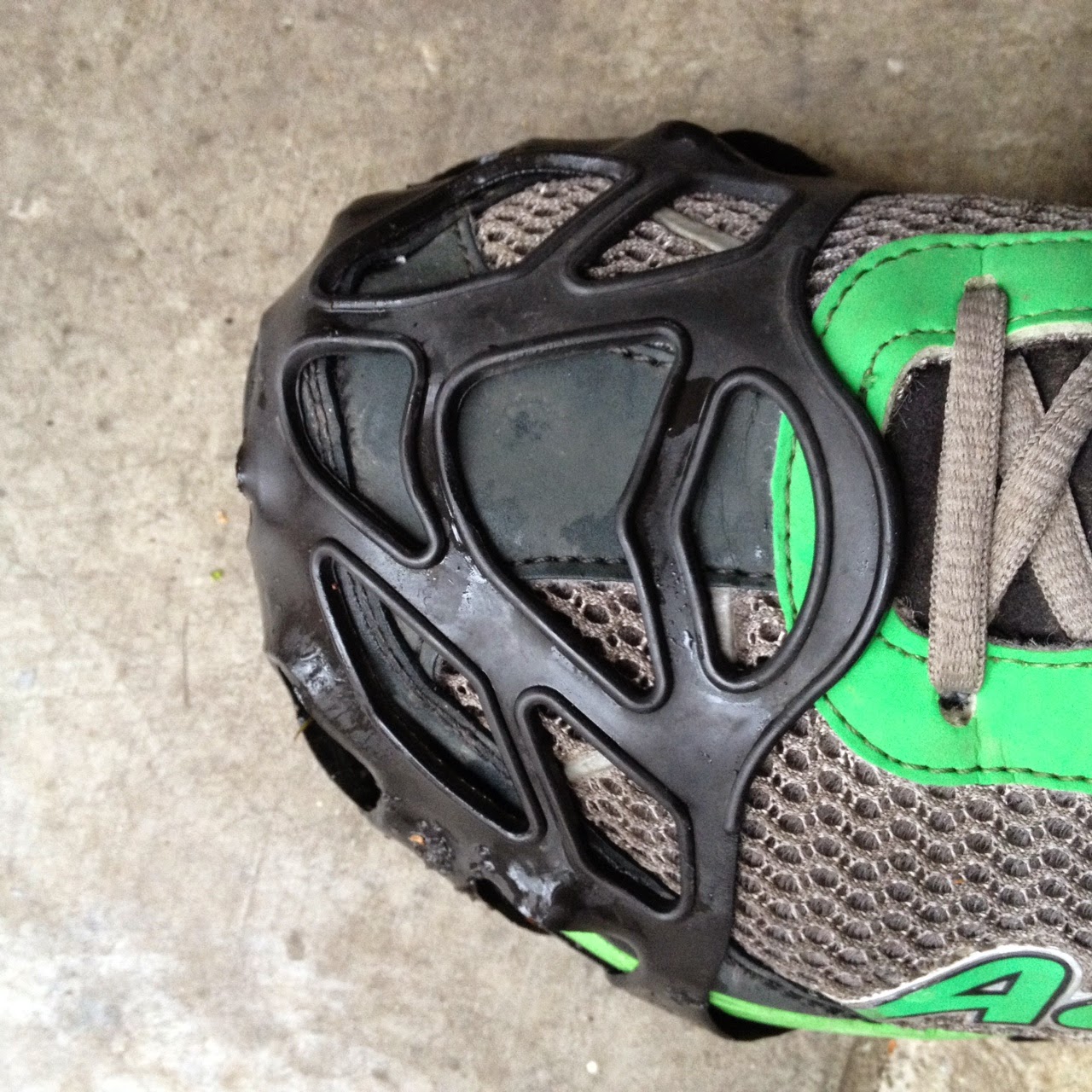 Cars skid past stop signs into traffic, as you deftly maneuver around the smoldering wreckage. Small children and squirrels look at you with amazement in their unblinking eyes. An ambulance seems to be shadowing you. You can hear the collective "DUMBASS!" grumbled by creeping motorists, as you seem to be making better time than them. Without a doubt, you are having a better time than them.