My days off have been pretty regimented. I am studying for a March promotional exam and I have been running, and, well, that's pretty much it. I am upping my mileage ten percent every week. This week I will be at 33 miles. The snow makes it a little more difficult, but much more interesting. Yesterday I left 12 miles of footprints in fresh snow.

My usual ride or run to work has been extended from 2.5 miles. Last shift I was up at 5 a.m. in order to run an extended loop of five miles to work. It was fun and surreal. I wear a headlamp and was spooked to see a large truck's headlights coming at me in the dark. It turned out to be two runners, likewise headlamped, running side by side toward me. Weird.

After their catastrophic failure, I tried to find some replacement x-country boots that would fit my oddball ski bindings. No luck. So I turned, as I usually do, to Gorilla Glue. We'll see, they may need to be reinforced with Gorilla Tape.

Posted by EvilElf at 3:55 PM No comments:

Ran home from work yesterday morning after a fairly busy night.  Sarah had everything packed for some cross-country skiing.

It was very sunny on top. Down below was cloudy/foggy. These are some of those cross-eyed 3D pictures. Click on one and go for it. Yes, I believe that is my finger in the shot. I should do a review of the Fuji Finepix Real 3D camera some day. It won't be pretty.

About two miles out, I realized one of my 25 year-old boots was coming apart.

After another two miles, both my boots started separating from their soles.  Then we made a wrong turn onto some ungroomed black diamond icy stuff. We slowly began our way around Horse Mountain and Quartz Mountain. I started falling down. Did I mention I ran home from work before this? I robbed one of my ski poles of its strap to bind up the worst of the boots and walked.  Sarah walked with me in solidarity.  We didn't see anyone else for almost 2 hours. Oh, and because I was in a hurry,  I didn't pack the usual modest survival gear, or print out a map. At least the weather and company were nice. 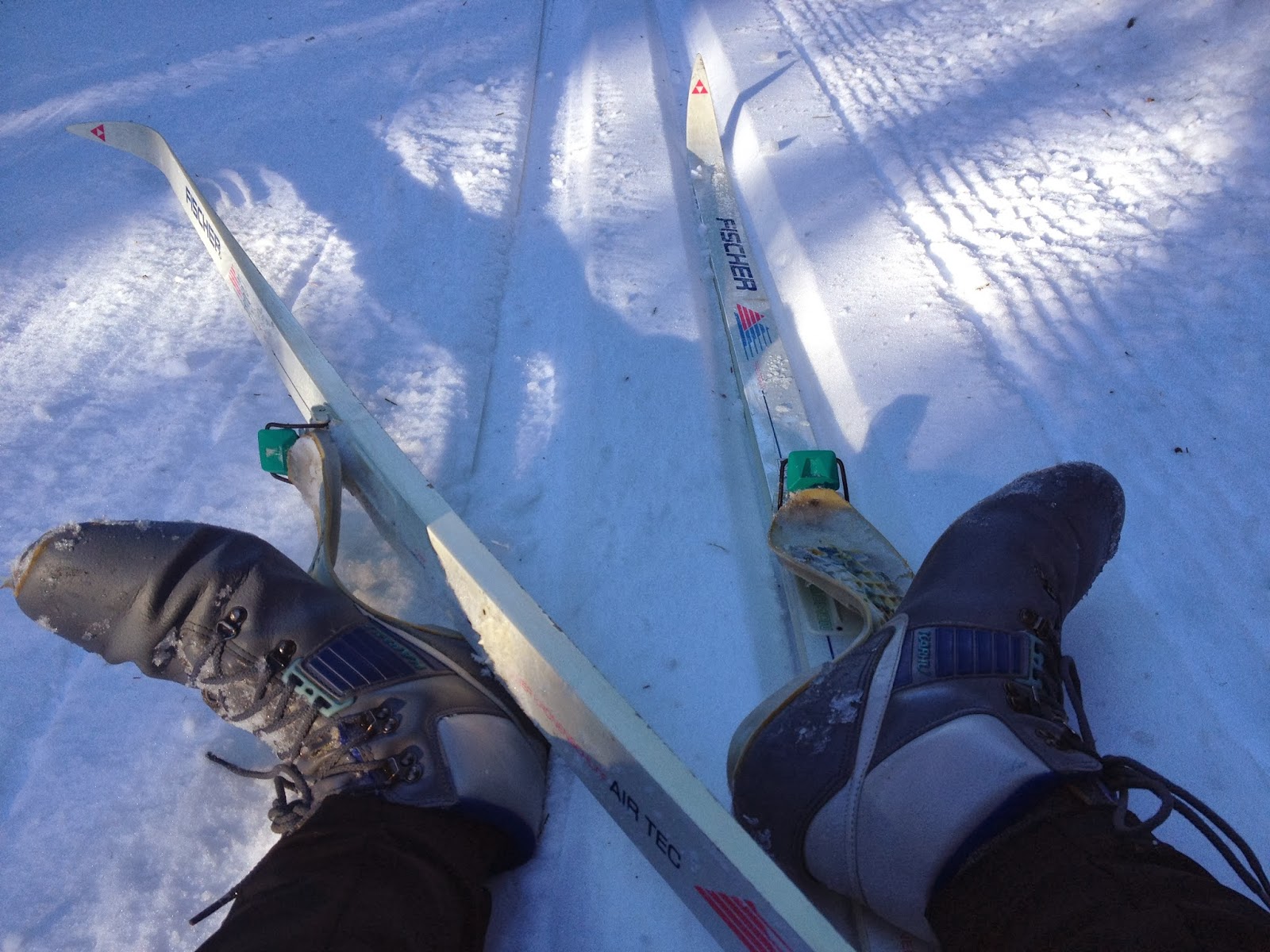 Popped out at the Nova Hut and then I put the skis back on for the remaining mile or so back to the parking lot. But, both had separated so badly, I resumed my falling down hills protocol and walked the last half mile back. All told about 9 miles (I think) of ski walking. And today, I had to put in a 10 mile run to stay on schedule of where I want to be this spring.

I might be ready for some new boots. Beer never tasted so good. 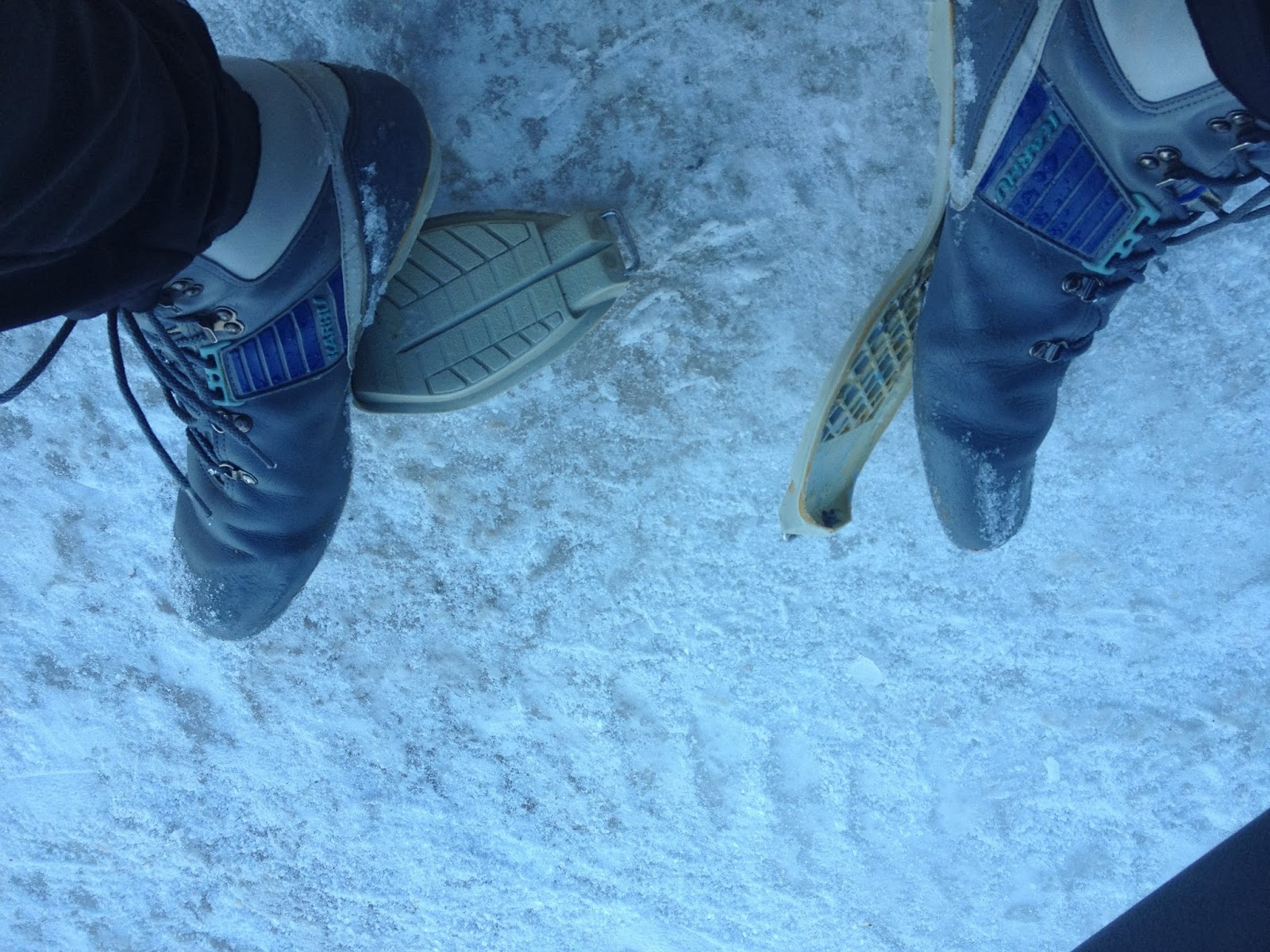 Posted by EvilElf at 3:08 PM No comments:

Fairly good ice fishing out at Eloika yesterday. Enough for some fish tacos with homemade tortillas for dinner. Saw more bald eagles. I wonder when these birds will cross into the pest category. Will we have eagles knocking over our garbage cans and eating our cats this time next year?

While it stayed foggy in Spokane, it was clear on the lake. The ice was about 10 inches thick. My auger is a museum piece that has the little sharpened spoon at the end instead of the more efficient corkscrew dealios of today. When you drill a hole with this thing, you sure don't want to drill another, so you tend to be a little more patient minding your own i-hole.

Ice fishing is the best. If you go by yourself, it is a great time to think and chill (really). If you go with others, it's a really fun social event and your beer always stays cold.

Posted by EvilElf at 9:22 AM No comments:


Upper left - click to make sure the sound is on. I wish I could understand their wondrous words. I think I made out something about the Seahawks or a sale at Rite-Aid. Not sure.

Posted by EvilElf at 7:12 PM No comments:

Sarah and I went out to Lake Coeur d'Alene last weekend to check out the eagles. There were plenty. They all looked the same. There wasn't a sad eagle in the bunch.

There were a lot of photographers out there too. So many had the gigantic telephoto lenses. I would say most photographers did. There was one guy who didn't even get out of the car, but had his Iphone up to the windshield trying to take a picture. Maybe he was playing Angry Birds in an ironic fashion. I had a zoom lens, so I was in the middle of the spectrum.

Then there were some people who looked like they were looking for a keeper. Suspect the smoker or crockpot at home was dusted off and waiting, ready to accept piebald goodness.

I want to get some better pictures. Sarah has agreed to let me photograph her holding a fish in an alluring fashion, as an eagle lands on her arm to accept the fish. We have some pretty good gloves for her to wear. Just holding a fish outstretched for a couple of hours should be a pretty good workout.

My eagle calling is not what it used to be, and I will be brushing up on that too.

It's pretty neat. Coeur d'Alene has bald eagles and Spokane has Dick's seagulls. Something for everyone.

Posted by EvilElf at 4:43 PM No comments:

Walked downtown to pick up our Whitestone wine. What a beautiful day! 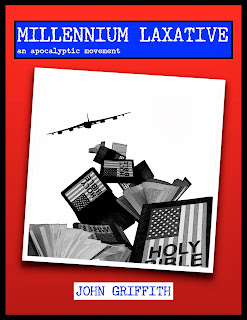 I wrote this novel back in 1998. I was working in Campus Ministry at Gonzaga University, and freelance ad writing to help pay the bills.

The Left Behind series of books was just taking off. I never read any of them, but I read about them. The Religious Right’s usual gang of antiChrist suspects featured prominently in this mega-money-making literary enterprise. It looks like I wrote Millennium Laxative as a response - portraying the Religious Right and their ilk as the villains in the “end times.”. I can’t remember if that was the point.
I must admit that, now, religion matters less than it did to me when I wrote this. It was my job, after all. Today, I find solace that religion (all across the political and faith spectrum) has been pretty much defanged. Alleluia. It does make the premise of this book a little less urgent, and hard to swallow, though.

In 1998, the Internet was pretty basic. I sent a synopsis of the novel and the first three chapters to literary agents all over the United States. I went through a lot of stamps. The first reply I received was very positive. They were very interested and wanted the whole enchilada mailed to them. I then started to receive nothing but rejection notices. But, I wasn’t worried. I had someone interested with my very first mailing. Then, I received their rejection notice, as well. “Sorry, this book is too ‘over the top’ for today’s conservative book market.” Darn those conservatives!

I eventually moved onto other projects and other jobs. About 10 years ago, I found the 3-1/2-inch floppy disks with drafts two and three on them. Sadly, I had written the book using WordPerfect - the king back then, and now just another defunct word processing program. I found some translation software and converted the files into Word. A few months ago, I started cleaning up those files. There were a lot of problems - continuity, story deviations between drafts, etc. I finally resorted to scanning the 210 pages of my bound draft (hopefully that was the final version) and then running an OCR program to convert the PDF images into editable digital text.

Optical Character Recognition is not foolproof by any means. So, there was a lot of cleaning up to do to get to a passable draft. I couldn’t find the original artwork either, so I reconstructed it to the best of my memory, as well.

Now, here it is, published as an e-book, thanks to Amazon. For some reason, italics don’t work, so my apologies to all the literary and motion picture references that go unitalicized. In my heart, your text shall always tilt.

Like I said, I don’t care about religion as much as I did. If you read this and want to argue some point with me or commiserate, I am probably a little too rusty, a lot less passionate and certainly more happy to make it worth your while. I know you can read that last part two ways.