We went on an overnighter to Seattle last month. Sarah did all the planning and booked a nice hotel in Pioneer Square. On our first walkabout we noticed the Utilikilt store. Utikilts have been around for a while. I’ve been interested in getting one since I first saw them online. With a little prodding from Sarah, we, along with our two somewhat-embarrassed teenage sons, walked into the (thankfully) empty Utilikilt store. 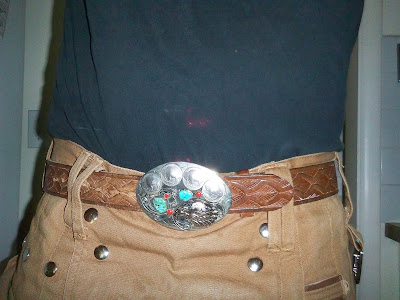 Measurements were taken. I was shown to the dressing room (a forlorn corner of a counter in the middle of the room) and dropped trou. A kilt was briskly wrapped around my mid section and pulled down to rest upon my hips. I was directed to a fan on the floor and witnessed for myself the ventilation miracle that is Utilikilt.

I settled upon the Workman’s Utilikilt. It has cool things like a hammer loop, tape measure loop and big pockets. It’s made of duck material that’s thicker than a pair of Carhartt pants. I admit I also chose this model because I thought it would make me a little less susceptible to ridicule. I mean, “This is a WORKMAN’S Utilikilt. It’s tough, just like me. Please don’t laugh.” I was asked if I wanted to wear it out of the store. I declined.

I have worn this thing a lot in the past month - all over Spokane - in all kinds of places. I haven’t been laughed at (at least not to my face). About the only comments I have received were “Nice Utilikilt!” Most of the time, no one seems to notice. Which, in a way, was kind of a letdown. Sarah and I have received better service in some places - I think people wanted to check the Utilikilt out.

So, what do I think of the functionality? Number one - it feels great. Let’s see how do I say this without being too graphic? How about - There is no “scrunch” factor.

I was surprised by the temperature difference between it and a regular pair of shorts. Even though the material is thick, the air circulation really is incredible. I would estimate that on a 90-degree day, it is about 10 degrees cooler than a pair of shorts. These temperatures are Fahrenheit and not Celsius with windchill factored in ( I am not a broadcast meteorologist).

I expected more of a Brave Heart vibe while wearing my Utilikilt, but I wasn’t unhappy with the more enlightened Marvin-the-Martian energy that seemed to trump the channeling of the noble Scottish warrior. 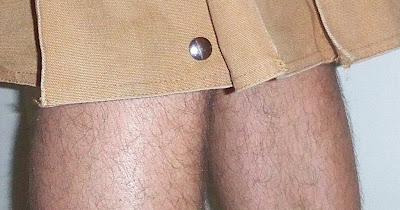 As a toolbelt, all the stuff works fine. However, like other toolbelts I have worn, I never can maintain the discipline of putting the hammer in the hammer loop or the tape measure in its proper place. Instead I tend to put everything into my pockets. Pockets on the Workman’s Utilikilt were built with my A.D.D. construction techniques in mind. Screwdrivers, measuring tape, a pencil, a hammer, twist connectors, pliers, a wire stripper, screws and a knife all intermingled in these gigantic pockets, and didn’t fight me when I had to fish them out. Best of all. I always knew where they were!

I haven’t worn it while riding a bicycle yet. I don’t think that would be very functional and I could wind up with a very pleated ass by the end of the day. I think one would be great to take with me on the Xtracycle to put on over the bicycle shorts after I reached a camping spot or some other destination. You could then remove the shorts and be living the dream. Sounds like too much planning though.

The price of any Utilikilt is pretty steep. To be fair, they are made in the USA (Seattle even). There’s a lot of good workmanship involved too. They are worth the money, at least to me.

I wear the Utilikilt 3 or 4 times a week. Eventually, I am going to mix it up by getting another one or two. I think the Utilikilt Survivor might be next. Will I be wearing one after the snow flies? Maybe. I don’t want to think about that yet.
Posted by EvilElf at 9:51 AM 8 comments:

Sarah put together a great little getaway for all of us. Just an overnighter but a very relaxing time: 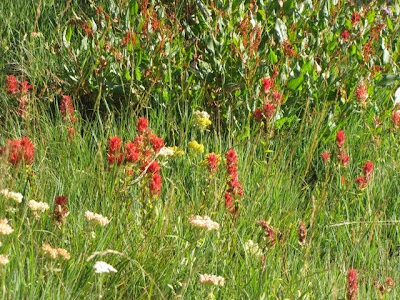 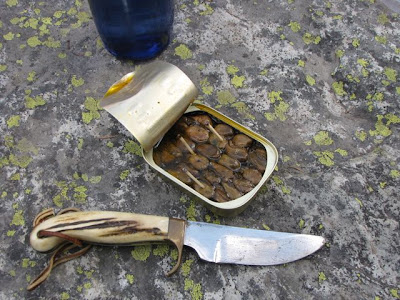 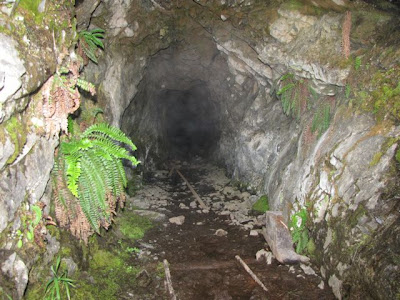 Can you see the old miner's face in the mist?
Posted by EvilElf at 9:41 AM 1 comment: 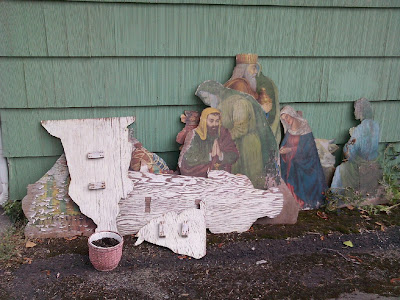 I recently became Facebook friends with Cathy McMorris Rodgers! It is awesome. You get to see what her followers have to say, then you can comment on it. It's like being at the Town Hall meeting and asking the old lady who is decrying socialism if she is on Medicare. One more reason to love the Internet/webs/tubes.

If you are on Facebook, you need to become her friend now!
Posted by EvilElf at 3:01 PM No comments:

Spokefest is right around the corner!

September 13th! Maybe it's time to brush up on some bike safety (Thanks Ike):

Posted by EvilElf at 7:40 PM No comments: 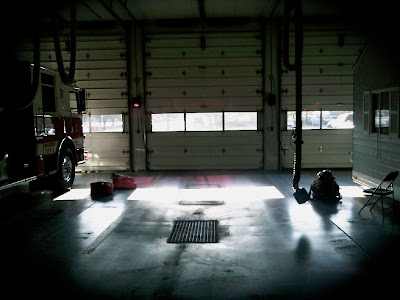 This is always a strange sight. Usually when the engine is gone, I've gone with it. So, I don't often get to see this.

Last shift change, the oncoming crew caught a run right out of the box. I was the only one still hanging out at the station from my shift. It had been a pretty busy day, about 12 runs before 10:30 PM. The worst of it was the six runs after 10:30 PM! At 4:30 AM we finally had our last run of the shift.

So, while part of me wished I was going on the latest adventure of Engine Three at 8 AM, most of me was glad to be relieved. As I hopped on my bike to head home, I took this picture.

The engine on the left is the new Engine One, basically stored at our station until the shop is ready to get it ready.
Posted by EvilElf at 12:07 PM 2 comments:

When we purchased the composter we also received two $30 off coupons for for anyone else who wants to buy a NatureMill. So, if you're interested, e-mail me and I will try to get a coupon to you. So far, this thing has been doing a great job.
Posted by EvilElf at 12:03 PM No comments: 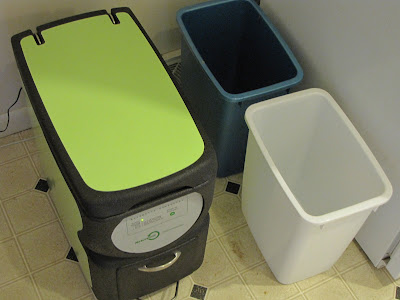 Thanks to Sarah, we're getting to the point where very little from our house is going to go into the garbage can. The green thing to the left is the NatureMill. The white receptacle is for garbage. The blue receptacle is for our new office curbside recyclable container. It looks like this: 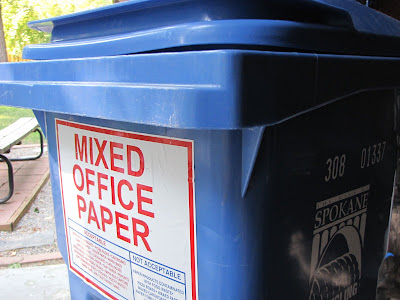 What can go in here? This: 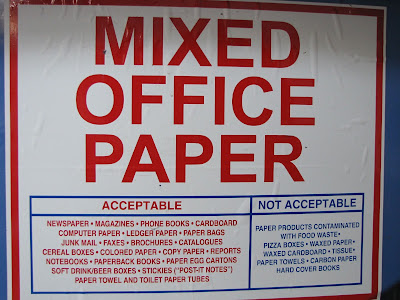 When we first received the NatureMill, Sarah thought she might have to send it back. It made an unexplained clicking sound and didn't seem to work right. A call to their service center gave us information that wasn't included in their instruction manual. Since then, it works great. So you take garbage that looks like this: 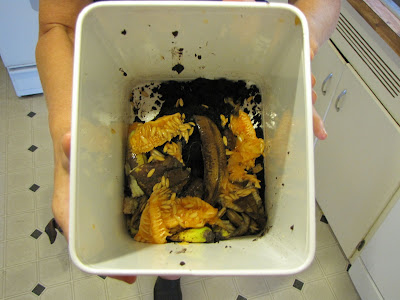 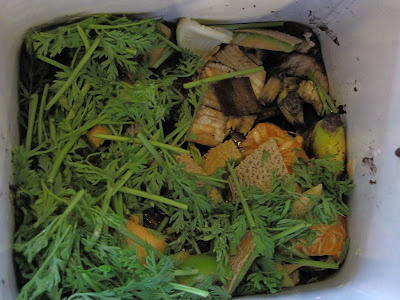 And throw it into the hopper: 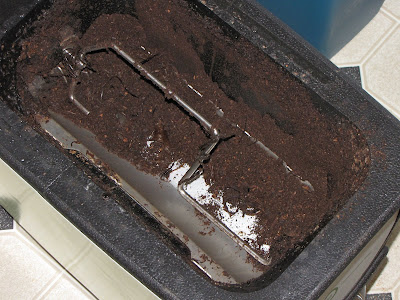 Along with kitchen scraps, You have to throw a few standard wood pellets on top of it: 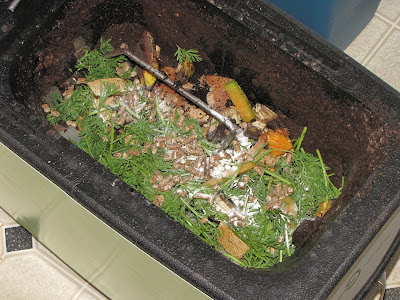 It churns and heats periodically. As long as you aren't tempted to keep peeking at the composting material, there's no smell. But, if you keep opening the door the smell gets out.

After 5 or so days of adding stuff, you have this: 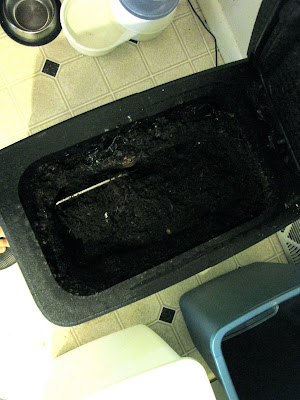 Then, it dumps into the bottom: 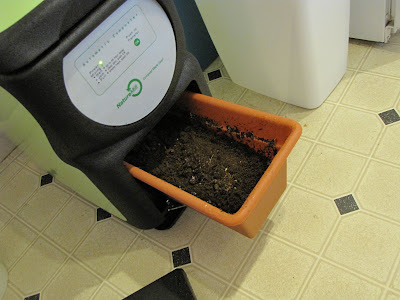 After a couple of weeks of adding kitchen scraps you have a lot of fully composted material. This thing is pretty awesome.
Posted by EvilElf at 10:07 AM 8 comments:

For those of you like to follow such things, the Spokesman-Review, yesterday, endorsed Michael Allen for city council position two of district two. And not to outdo themselves, they had to consider that it was a close tossup between Allen and Steve Eugster. I would imagine John Snyder celebrated their almost dual endorsement of Allen and Eugster, and was relieved when he came in a distant third. It speaks volumes.

I have to admit, I think Michael Allen has done a fairly good job, but I can't help but wonder if John Snyder might do better. The S-R's editorial now made this decision easy for me and probably for the dozens of others who read the newspaper. In fact, I will soon be making a donation to the Snyder campaign. I was on the fence. Thank you Spokesman-Review, and I'm sure Snyder thanks you as well.

For you see, the Spokesman has a long history of endorsing losers. Yes, usually the people they endorse tend to lose the election. Likewise, the few that they have endorsed that actually achieved election tended to be losers for their constituents.

This morning's S-R endorsement of Kathy McLaughlin will probably also have ripple effects of satisfaction for her opponents.

I don't think Michael Allen's a bad guy. He certainly deserved better than an endorsement from the Spokesman-Review. But, I guess that's politics.
Posted by EvilElf at 10:23 AM 7 comments: