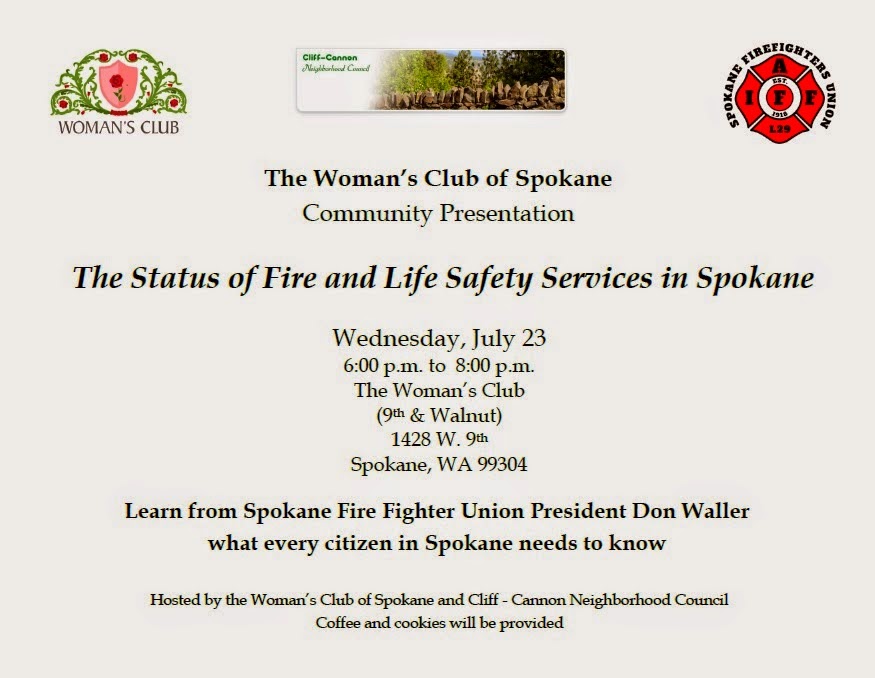 As many of you might know, I make my living as a firefighter. Until recently, I was part of the Spokane firefighters union's leadership. My friend Don Waller is now president of the union and he is going to give a presentation on "The Status of Fire and Life Safety Services in Spokane" at The Woman's Club this Wednesday. You are invited. Don is a numbers guy, but he is also a very good public speaker. If you are interested in Spokane and its future (you probably wouldn't read this blog if you weren't) please come to this meeting.

How does Spokane's emergency responses stack up next to our neighbors' and other cities'? What is the funding like in comparison? What ever happened to the fire bond vote? What effect does an adequately-staffed/funded department have on your insurance premiums? What gives the biggest bang for the buck for taxpayers? I am just guessing that this will be some of the subjects covered. Knowing Don, there will be a lot of graphs and charts - all vetted with sources.

If you think you can know what is going on in the city by just reading the paper, you might want to think again. For example, recently, there was a lot of press about funding being restored to reopen Engine 9 on the South Hill. What wasn't mentioned is that when Engine 9 was shut down last year, two-person Rescue 1 moved up from Downtown and became Rescue 9. Now by having one person added to Station 9's roster each shift, Engine 9 is now reopened by jumping these three people off the rescue truck when needed. In other words, there used to be five firefighters - three on the engine and two on the rescue - fully staffing both. Now, there are three that move between the two vehicles for a loss of two firefighters. Perhaps this is a small point, or perhaps not, but it was not one that was even mentioned in the press coverage.

Maybe you've heard about the new Alternative Response Units - the one-person units that now operate on most weekdays and keep the big trucks in the station most of the time on non-life-threatening calls. This was an idea that came from the firefighters' union. Likewise, this was not mentioned in the press coverage.

Please, if you are able to attend this meeting, you will get to hear an unfiltered, unadulterated account of what's really happening and what the future may hold, perhaps making your voice louder in the process. I know Don would be happy to answer any questions you might have or hear your ideas and listen to your experiences.

We who do the work of caring for people on one of the worst days of their lives don't quit caring about them when we hang up our helmets at the end of the shift. I think that will come through loud and clear when you hear Don.

Posted by EvilElf at 1:15 PM No comments:

Due to all the smoke, we've had some real interesting skies lately. Two days ago, the sun coming up looked like a red traffic light. That evening I suggested to Sarah that we have some ice cream at The Scoop and then watch the sunset from High Drive. So we did. Things were looking good. Then as the sun approached the horizon, it slide behind a high wall of smoke and that was it. Gone. No color. No nothing. Total bust except for the ice cream and the company.

Here's a picture before the anticlimactic sunset. 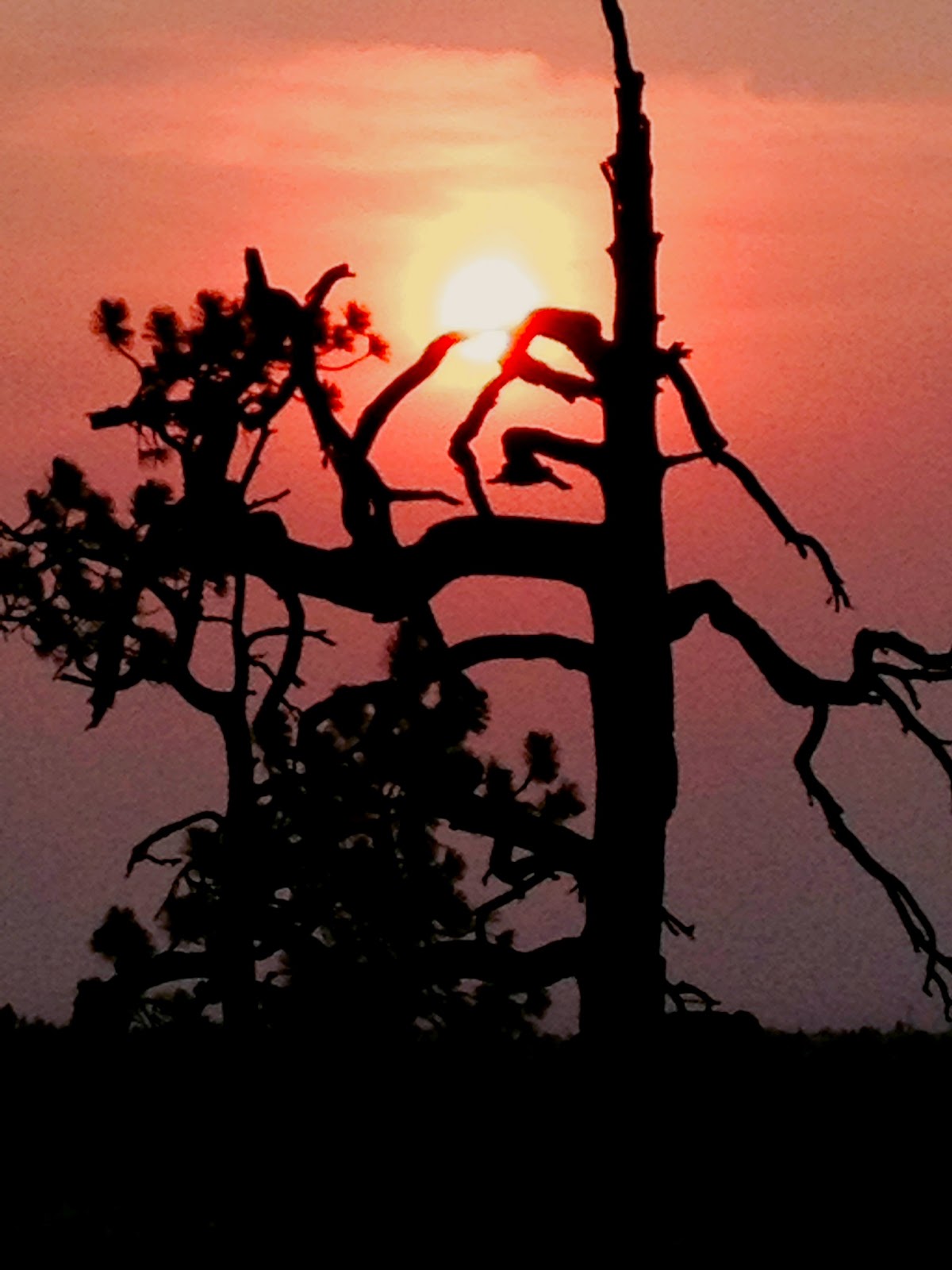 Posted by EvilElf at 9:46 PM No comments:

Well, you are probably not wondering how grows my garden, but that has never stopped me before.

Everything was grown from seed here at headquarters, except 5 of the 20 something eggplant. I was worried that my eggplant had too late of a start. I panicked and bought the 5 starts. The little ones that I started from seed now have just as many blossoms on them as the purchased ones.

The vertical hydroponic tomato garden (VHTG) is in a new sunnier spot this year and is doing pretty well too. Still no ripe tomatoes from hydroponic or traditional methods yet.

Working in the garden is always great. People stop to say that things are looking good (thank you) and also want to tell me about how their garden is faring. It's a nice way to get to know people in the neighborhood. Sarah has been a neighborhood supplier of raspberries, thanks to her finely honed skills as a child laborer.

The bees have been really going to town, burrowing deep into the poppies, sometimes 5 or 6 to a flower to imbibe in poppy nectar. Someone must have some hives close by, there are so many of them. Poppy honey sounds addictive. I think the bees' activity is a little compressed too, in that once it gets above 80 degrees, they have headed off to a cooler place, or maybe to cool the hive down. Pretty smart them bees.

Sarah asks me last week if I want to do an overnighter in Bellingham and get back before I work on Sunday. Great idea! So we headed out on Friday to visit our son who is not coming home for the summer from WWU.

Bellingham is a good six hour drive from Spokane, and when there are two of you making the trip and sharing the driving duties, it's not bad. I have done the solo Bellingham and back trip. Not as much fun.

We got into town a little before noon and then headed over to visit Ike and his girlfriend Kalli where they were working at a Bellingham Bells baseball game. I am probably not the biggest fan of baseball. Yet, I had one of the best times at this game.

Bellingham was playing the Cowlitz Black Bears. Entering the gate, we encountered a ticket taker who wanted to get the attention of some media people there, so we arranged for this photobomb.

Who/what is the Bell's mascot? Why "Dinger" the Belling Hamster, of course. The fellow handing out the programs was a retired Bellingham firefighter, and it's always great to make that connection and talk fire stuff.

We bought our bratwursts from Ike (actually you buy the buns and then take the buns over to the grilling dude and he completes the transaction).

The brats are huge and locally made. Another Western student was there to show us to our seats in the stands. The stadium is probably half the size of the Spokane Indians Ballpark. They had a little problem with three seagulls that had made their way in through a hole in the netting that covered the grandstand. The seagulls were unable to make their way out. Our usher and others were looking for a way to set them free. Sarah suggested putting one of the aforementioned buns by the hole in the net and they might figure it out. This attracted one more seagull.

Before the game started I went to the beer stand. $5 pints of locally-brewed Boundary Bay beer. On Tuesdays beer is $2. Wow. Great beer.

A young man, who was in the process of learning how to play the electric guitar, did his version of Jimi's Star-Spangled Banner. Then the owner came out to the field. He let everyone know that today was the guitar player's birthday and that the kid was named after Lou Gehrig, and coincidentally (or not) today was the anniversary of the day that Lou Gehrig retired from baseball because of the ravages of the disease ALS. He then introduced a man sitting on a stool between home and the mound. This was a friend of his, a man who he had gone to Stanford with and who was also a very successful businessman. This friend had ALS - Lou Gehrig's Disease. When this man spoke he told a story of how he came to the USA as a young boy and was grateful for his education and the success that America provided him. He also said that what he wanted more than anything was to eradicate ALS so Lou Gehrig would be remembered only for being a fantastic baseball player, not for a disease. He threw out the opening pitch, but the pitch was not to his liking, so he threw it again - this time right over the plate.

Maybe it was because he looked like a friend of mine who died from ALS, maybe it was seeing my son whom I hadn't seen in months, maybe it was the beer. For whatever reason, I really got choked up. Very moving.

In the meantime, the seagulls were bouncing off the nets behind home plate. Each time one was hustled out, the fans erupted in cheers. This cheering often occurred at a bad time for the Bellingham team, which made them all swivel their heads to the stands at each outburst - "Has the entire home stadium turned against us?" Kalli got the last one out, right at the hole with the hotdog bun stuck in the netting. And the fans went crazy!

The best baseball game ever. Bellingham won and has continued to win. I think a baseball game needs a moving story from the diamond and drama in the stands to make it great. Cheap local beer and big brats doesn't hurt either.

OK. Really, I just want to brag that I rode 40 pounds of charcoal up the hill from the hardware store (which is probably not even a half mile away). But, it was hooooootttt (said whiningly).

When Ace has lump charcoal on sale, it is time to buy, Usually, it's $15. On sale - $10. And it's been years since I have found any dimensional lumber charcoal in the bag. Although the t and g charcoal always made for a very neat fire.

I will not admit that I am getting old, but I have started dipping into the smallest sprocket up front when carrying loads up hills. Can an electric assist motor be far behind?