I guess lice were pricier back then.

Posted by EvilElf at 4:59 PM No comments:

Tony Yuen, who is about the nicest guy you will ever know, drives Pumper Ladder 13 up on Wellesley and Jefferson. Tony is also a great cook and can throw together meals that are inexpensive, delicious and big - the trifecta of fire house cooking.

Tony entered a contest via TreeTop to come up with a BBQ recipe using TreeTop products. Out of all the recipes entered, his was in the top ten. So, Tony received a lot of stuff from Treetop, including a little camera to shoot a video that had to be 4 minutes or less. Tony called me and another SFD guy to help him make the video and we think it turned out pretty good. Right now Yakima and a town in New York are ahead of us in votes.

If you have a few minutes check out the Spokane video and vote for it! 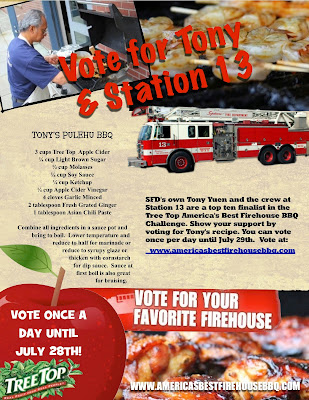 And if you want, you can vote every day for Tony Yuen and Fire Station 13's video!
Posted by EvilElf at 8:28 AM No comments:

The slimy underbelly of organic gardening... 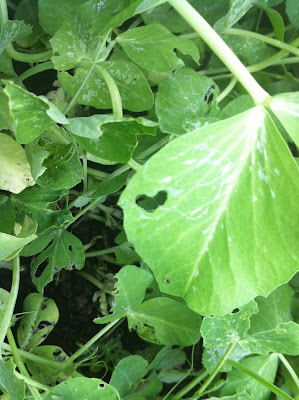 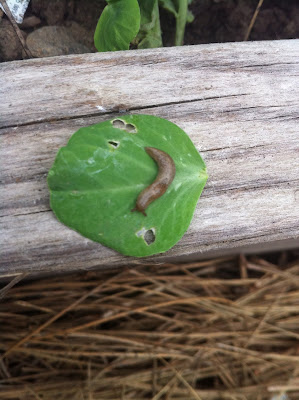 Every year the vegetable garden slug infestation gets worst. These slugs are usually no more than an eighth of an inch long. Some have gotten as big as about half an inch. Yet, there are hundreds of them, and by the end of the growing season, they have trashed the garden.

So the other morning, I had my face buried in the peas. A nice couple walked by and asked if I was talking to my plants to help them grow. I replied, "No I am squishing slugs." And then popped one right then and there. 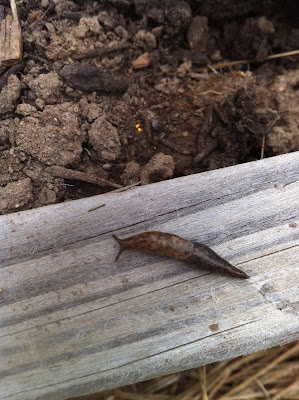 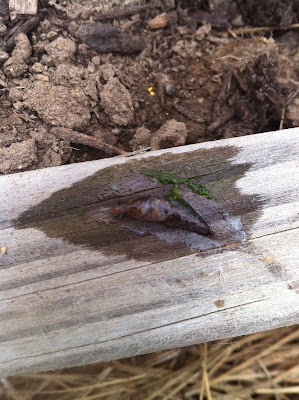 A reminder to my vegetarian friends that, even though organic veganism is certainly the most ethical way to eat, there are still plenty of animal casualties. This squishing brings me no joy, and is unpleasant for all parties including you who are now reading this blog.

Every morning I do this. Every morning the fields run green with the guts of gazillions of gastropods.
Posted by EvilElf at 10:46 AM 5 comments:

I hope you don't catch this earworm.
Posted by EvilElf at 9:08 AM No comments:

When Spokane shuts some streets down, antimayhem usually ensues. Think about Bloomsday or Hoopfest. Fun. Fun on the streets.

This year, Summer Parkways is back! Streets will be shut down for neighborhood parties that focus on fitness and fun. Last year, I had to work every single day of every single one of these. I think this year will be different. I am dusting off the ukulele, enhancing the Xtracycle sound system and scotchguarding a kilt for this event. It will be that good of a time.

I received this information today about Summer Parkways and am passing it on to you:

In 2011 we have expanded to three events. As you know the streets become a huge park and people have the chance to enjoy the car-free streets of the course, and participate in the outdoor activities at the event.

This year we have added a new feature for groups called "meet-ups". This provides the opportunity for cycling groups/clubs/friends to ride together to the event from a set location, then do the course. This makes it a fun way to arrive as a group, plus alleviates parking. The meet up can be set up on the website page www.summerparkways.com/meet-ups

Below is the event information. Feel free to edit to suit.

Let me know if you have any questions, and hope you'll be there!

The second year of Summer Parkways is taking place in three different Spokane neighborhoods. It was inspired by an event called Ciclovia (meaning "bike path" in Spanish) in Bogota, Columbia. Streets are closed to vehicular traffic and opened up to games, walkers, cyclists, exercise groups, skateboards and other human-powered activity. Summer Parkways promotes a healthy lifestyle and provides a chance to join families, friends and neighbors for free outdoor, family-friendly and community activities in parks and on car-free streets. Walk, cycle or skate, test ride an ElliptiGO bike, swivel your hips hula hooping, unleash creativity with chalk art, try TRX, dance to the beat of Zumba or try out many other activities.

Collect a group for a "meet-up". Meet-ups give cycling groups/clubs/friends the chance to ride together or choose any human-powered transportation - unicycles, skates (or penny farthing anyone?) to the event from a set location, then participate in the course. This makes it a fun way to arrive as a group, plus alleviates parking. The meet up can be set up on the website page www.summerparkways.com/meet-ups

Kick off this year's Summer Parkways with an evening of fun in the Manito/Comstock neighborhood on June 22nd from 6.00pm-9.00pm, followed by daytime events in North Hill and Northwest neighborhoods.

The events are presented by Spokane Parks and Recreation, The City of Spokane, and the SpokeFest Association.

Make Summer Parkways a success by participating in the action, or volunteering. For more information, visit www.summerparkways.com or email summerparkways@gmail.com and www.facebook.com/summerparkways

I think they are still looking for volunteers, if you are interested as well.
Posted by EvilElf at 6:39 AM No comments:

What Cathy McMorris Rodgers would like to do to her constituents...

The budget passed by House Republicans in April 2011 makes radical changes to Medicare. The Republican plan raises costs for seniors and individuals with disabilities enrolled in Medicare, reduces their benefits, and puts private insurance companies in charge of the program. For current beneficiaries, important benefits – such as closing the hole in Medicare’s drug coverage – would be immediately eliminated. For individuals age 54 and under, Medicare’s guarantee of comprehensive coverage would be replaced with a “voucher” or “premium support” to buy private health insurance. By design, this federal contribution does not keep pace with medical costs, shifting thousands of dollars in costs onto the individual.

This analysis shows the immediate and long-term impacts of these changes in the 5th Congressional District in Washington, which is represented by Rep. Cathy McMorris Rodgers.

The Republican proposal would have adverse impacts on seniors and disabled individuals in the district who are currently enrolled in Medicare. It would:

From Impacts of the Republican Medicare Plan In Washington’s 5th Congressional District Committee on Energy and Commerce, Democratic Staff
Posted by EvilElf at 10:58 AM 6 comments:

Cool idea out of Portland - "The Bike Train!"


A few years ago, biking to Beach Elementary in North Portland was deemed too unsafe and banned. Today, thanks to the work of volunteers, up to 20 percent of the student body participates in a weekly bike train.


After pedaling with 60 Beach K-8 students to school on a recent Monday, I'm feeling a little – I don't know – sappy.

It was an imperfect but joyous line of candy-colored helmets and pumping legs, rolling through North Portland, growing in size every few blocks.

Kids at Beach School call it "the bike train," arriving every Monday. Parents and teachers say it's the perfect lesson in how commuting and community share the road.

"It hurts my legs," said 6-year-old Graisen Russell, his little hands firmly grasping handlebars, "but it's one of my favorite things. I'm glad we get to do it."

A few years ago, safety concerns prompted Beach to ban kids from biking to school.
Did I just write that in Portland, Oregon? Yep. A school in Bike Heaven where biking was once forbidden.

Beach is boxed in by Interstate 5 and buzzing arterials such as Interstate Avenue . So, the fears about children getting hit in traffic were valid. But it became part of a troubling national trend.
In 1969, about half of America's elementary and middle school students walked or biked to school, according to the Federal Highway Administration. Today, its just 15 percent. More than 50 percent get there in cars. Meanwhile, childhood obesity has escalated.

At Beach, Kiel Johnson swooped in like a chain-cranking Superman.
In 2009, Johnson read about a parent who became frustrated by the slow-moving line of cars dropping off Beach students outside the school. The driver sped out of the line and hit two children using the crosswalk.

Johnson, who had just graduated from Lewis & Clark College, was 22 and unemployed. "I figured I could sit around checking Facebook all day," he said, "or go out and do something."
He approached Beach with a safety-in-numbers concept. He drew maps of safe routes and meet-up locations. "The first bike train," Johnson said, "was me and one family."
Contrast that to last week, when a record 150 people pedaled in the train.
There are people who waste energy keeping the tired cars-vs.-bikes debate alive in online forums, where cyclists mock motorists for being "cagers" and drivers call bike riders "spokers."
Then there are those who show the next generation that they're blessed to live in a city where there are many ways to commute.

Parents at Beach started lining up to help organize and chaperone bike trains. After just a couple months, they took over.

The city helped by re-configuring some streets as part of the North Concord Avenue bike boulevard. It also allowed a section of North Concord in front of the school to be blocked off to traffic before the first bell. With help from the city's Safe Routes to School program, the number of Beach bike racks has grown from three to 25. The PTA now fixes up donated bikes and sells them for $15 to low-income students.

Johnson, meanwhile, has expanded the bike train program to 12 other schools, including one in Wilsonville, through BikeTrainPDX.org. "The most amazing part," he said, "is that these bike trains always seem to lead to a renewed sense of community."
--Joseph Rose

Posted by EvilElf at 8:30 AM No comments:

A sad story under the railroad tracks

That's a pair of pants crumpled on the edge of the sidewalk, up against the wall. There are some brochures scattered about.

Here's a close-up of one of them. It's an AA brochure.

I bet this happens more often than we think.