Usually not a big fan of robocalls, but this one from a day or two ago was fantastic. Some highlights - MONEY BOMB! MONEY BOMB 2 COMING AT YOU! Make a maximum investment, right here, right now! Our campaign was successful until Obama's War on Women.

In less than 60 seconds, this call left on my answering machine tells you all you need to know about who they think their base is.

Audio is on there twice because it is that good!
Posted by EvilElf at 8:05 PM 1 comment:

As seen in Seattle yesterday 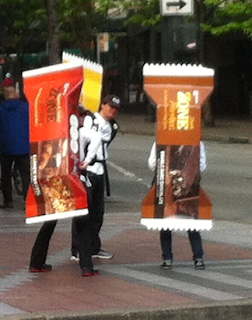 In Spokane, I have seen people walking out of bars in the Zone, but in Seattle....
Posted by EvilElf at 1:48 PM No comments:

Posted by EvilElf at 2:33 PM No comments: 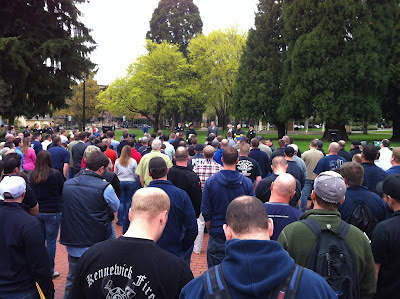 Washington not BC. Was in Vancouver for an educational seminar put on by the Washington State Council of Fire Fighters (WSCFF). I have been to a few of these over the years, but I don't think I had been to one in Vancouver. The picture above is a WSCFF rally where we endorsed Jay Inslee for governor.

When all was said and done, those of us from Spokane had to stay not where the classes were, at the Hilton, but at the Red Lion at the Quay. 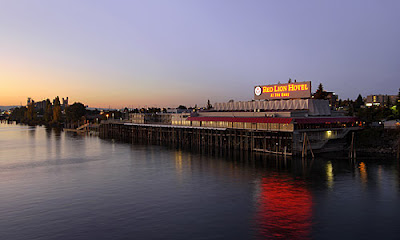 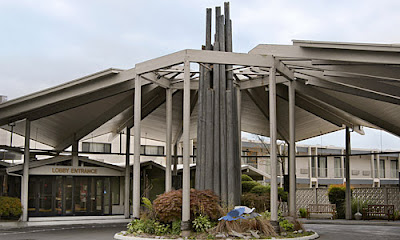 This Red Lion has an Expo 74 look to the architecture. The restaurant hovers above the Columbia River. The bar and restaurant look as if a pirate ship have rammed them. I have a fondness for tiki bars, and this rekindled the flame. It was fantastic! 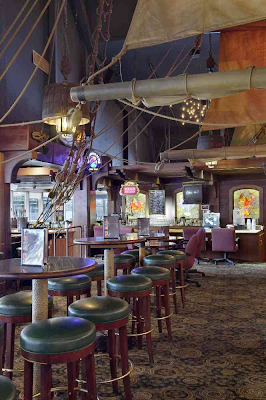 The classes were pretty good. During a lunch break I took a walk around Downtown Vancouver. If you were at a conference in Downtown Spokane, within a few minutes walk, you would be deep in the heart of restaurants, condos, department stores, bars, restaurants, movie theaters, museums, etc. Not so Downtown Vancouver. There are towers upon towers of condos, Downtown (a lot of people live there - no state income tax - and then travel across the bridge to work/play/shop in Portland - no sales tax). There was a movie theater, a few bars, coffee places and a Subway, as well as a very nice park. And that was pretty much it. Weird. There is a really extensive trail system by the river too.

When you walk across the bridge into Oregon and then take the light rail into Portland, you can see the population increase - more shops, more fun, more noise and you feel bad for Downtown Vancouver. Vancouver is in a great location. There were a lot of bicyclists there too - riding to Portland. It's amazing how a different tax structure and a different political mindset can really push or pull populations.

I know that this is a pretty broad statement, and I apologize to my Conservative friends in advance, but every city that I have been in that is perpetually thriving is one that is perpetually politically Progressive, environmentally-aware, justice-oriented, diverse, open-minded, taxes progressively, etc. etc. Maybe Portland and Vancouver need each other to exist.

Nice people in Vancouver and a great bunch of firefighters who hosted us. Thanks and we'll be seeing you later!
Posted by EvilElf at 12:54 PM No comments:

So begins a new season of the vegetable garden. Those plants already growing in the box are kale and collards. They are from last year.

Interesting plants, they would freeze and look destroyed like the other plants but then thaw out to look just as good as before the freeze. Kale and collards should be in the diet of every arctic explorer.

Last year, the garden was getting destroyed by slugs as usual. For the first time, I used Sluggo, an environmentally OK slug killer. Overnight they were gone!

Just hoping the wild turkeys don't get into the garden this year. Might have to do some fencing.

I don't think I got started planting until June last year. So, I am ahead of the game already.

Posted by EvilElf at 8:35 AM No comments: 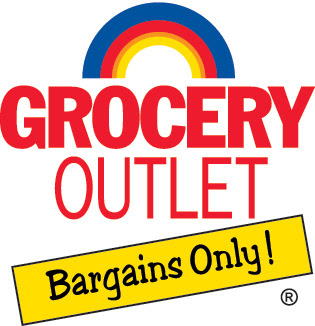 About a month ago, I visited the new Grocery Outlet in the old Safeway building downtown. Fantastic!

Found a bottle of wine that we usually pay $11. At GO, it was $2.99. Produce is cheap and good. Not much in the way of meat. Tons of frozen food. Great pasta from Italy. Bulk spices are a great deal. Beer is about the same price.

Like Harbor-Freight, you walk out of there with a lot more than what you were looking for. Best to not go there on a daily basis. The neighborhood Rosauer's continues to be our daily go-to store.

The cool thing about GO is that you never know what you might find there. Items come and go. That $2.99 bottle of wine isn't there anymore. But, I kind of like that.

Looking forward to their liquor selection (if they get one). I might be able to finally score some pimento liqueur. I think it would be great to get some Grocery Outlet reusable shopping bags to bring to Trader Joes.
Posted by EvilElf at 3:39 PM 5 comments: