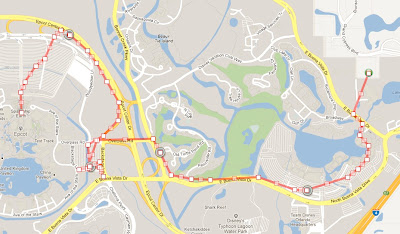 The first day of my union conference in Orlando, there really wasn't much going on until late afternoon/early evening, so I decided I would go to Epcot for the morning and afternoon. Never been there.

Our hotel was across the street from Downtown Disney - a conglomeration of shops, restaurants and entertainment venues. There are tons of buses (usually out front, but this week behind DD because of construction). So I walked across the street from the hotel and went through DD until I arrived where all the buses (all of them placarded that they are affiliated with the Magic Kingdom) were. I asked the bus driver if his bus went to Epcot. He said none of the DD buses went to any of the parks. I later found out that this was indeed true. He said I needed to go back to the hotel and take a bus from there. I asked him if it were possible for me to walk to Epcot. He laughed (a lot) and said that this was impossible, shaking his head. Craziest shit he had ever heard.

So I walked to Epcot. I think it was probably about 5 miles, all together. I had to walk along a road that was kind of like a freeway. There were no sidewalks, no bike lanes. There were no other walkers, bikers, just cars and buses. It was about 80 degrees with not a cloud in the sky. There was a nice breeze. I walked on a grassy shoulder, but every once in a while I had to step onto the highway to get around shrubs or get across a river by loping atop a highway overpass.

My GPS on my Iphone gave me a route that took me right to the "cast members" only parking area and employee entrance. It showed a way through to the front gate. Unfortunately, this route now had a fence topped with concertina wire. So, I walked around that entire corner looking for a breach and eventually over to the security guard at the delivery entrance to Epcot.

He was very concerned that I had crossed the street to talk to him in his security booth, waving me away. But I approached anyhow.

"Pardon me. I walked here and am looking for a route to the front gate."

"Where did you park your car?"

"I didn't drive. I walked about 3 and a half miles here from my hotel by Downtown Disney."

"You walked here? You couldn't have. Look. There is no way to get to the front gate from here. Turn around. Go back to your hotel and catch a bus."

"OK. Sure. Now as I understand it, if one were to continue around the perimeter, heading north, one should be able to hit the front gate. Is there a quicker way?

"No. And it's another 3 miles just to the front gate. Don't do it. Go back to your hotel and be careful."

"Absolutely. Thank you for your help." I shook his hand and then walked the perimeter to the north. A police car slowed down, but I think he just didn't want to deal with this bizarre walking issue and so he never stopped.

I found a breach in the palmettos, bushes and palm trees and staggered into the parking lot. Into the future - Epcot. And had a good time. I think I saw my old 77 Vega on a ride.

This area is weird. Disney owns the whole corner of the state. The land is flat. The weather is great. Why no bicycle lanes? Why no pedestrian walkways to the parks? It would be cheap for them to build and maintain. It would be fun for visitors. You could even line the trails with gardens or populate them with animatronic figures or God-knows-what. Rent bikes. Have electric scooters or trams, whatever.

Didn't see one bicycle in flat, sunny Orlando. I think the future may have passed them by.
Posted by EvilElf at 8:10 AM 2 comments:

The charmed life of walking... 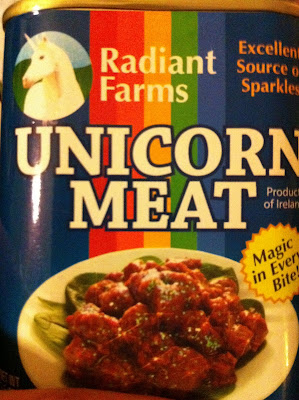 My favorite form of transportation is walking. Next, is the bicycle. This time of year, you can bundle up pretty good, pop in the earbuds - crank up the podcasts and get anywhere you want to go on foot. Put on some spikey galoshes or Yacktrax when it's icy. No locking up the bike. No finding a parking spot. Pretty darn convenient.

But, I knew it was going to be one of those days, when two days ago, I was walking downtown and got hit once by a car and had three near misses.

The hit - I was walking on the sidewalk/driveway in front of Huckleberry's parking lot. Car pulls up to turn onto Monroe. The driver checks to her left to clear traffic for her right-hand turn. I am walking from her right. She doesn't look to her right. I always look into the eyes of potential assassins, so I notice this, but too late. She turns into me and I bounce off her hood and fender. Not hard. I don't fall down and it doesn't hurt. She looks at me, over her shoulder, placidly as she proceeds up the hill. Sometimes when I have been hit, the ladies wave at me immediately after impact. We are a friendly town.

I've ridden the hood of a postal service vehicle while out for a jog. Some would consider this cheating.

There were a few more close calls in intersections on this obstacle-encountering mile-and-a-half trek downtown. The best was an elderly motorist's turn westbound onto Third - that is onto eastbound Third. The driver had to turn the wrong way in order to almost hit me in the crosswalk. He realized his mistake before contact was made. Which is nice.

At work, car accidents seem to increase when the weather turns pleasant, and this was a sunny day. So, maybe that was the problem. Maybe, I'm the problem.
Posted by EvilElf at 8:43 AM 5 comments:

Well, I am procrastinating. I should be swimming.

In another swim contest - FOR A FREE T-SHIRT!!!! Have to swim 165 miles by July 31st. This should help me prepare for the Long Bridge Swim again this year, too.

Want to get in 10 miles this week. Furthest swam in one shot is 3 miles on Thursday. That is a mind-numbingly long time. I am using the Swimp3 music machine to help the time pass. 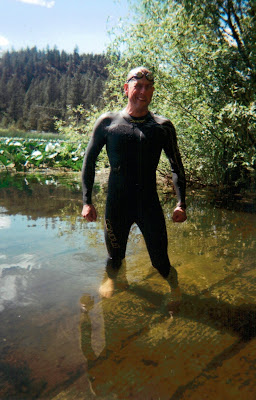 Yes. This picture is from last summer. And I am flexing. And that's as good as it will ever get.
Posted by EvilElf at 10:16 AM No comments: