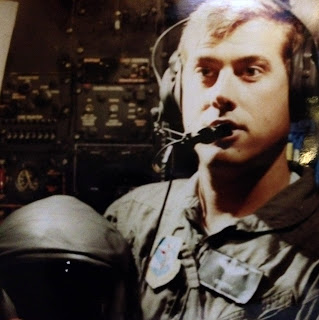 When I served in the air force, way back in the 1980s and 90s, we watched each others' backs. We protected each other and our unit at all costs. Our mission was important and our loyalty to each other was intense. The truth might take a backseat to the mission when necessary. In fact, anybody who has ever watched a World War II movie (I was raised on them) knows how people with a war mission cover for each other and expect the same from their comrades-in-arms. And to tell you the truth, I liked that a lot.

In little ways, I massaged the truth (especially for trivial matters) for people with whom I served. I know that others did the same for me. I remember our entire squadron taking a written test that was a determination of whether we were good at our jobs by HQ. This test was administered individually. The officer proctoring the test admonishing us that "If anyone looks at another person's test that will be considered 'cheating.' However, if you look at two or more tests, that will be considered 'research.'" It was a great line and we all gleefully started our research. And really, in no way did this test reflect our capability. It was silly and with this “admonishment” all parties were in jovial fraternal agreement.

An institution that relies on people who put the mission and each other as Number One, needs to be have people who have common sense and esprit de corp. Back then, part of that common sense and commitment to each other manifested itself in occasionally massaging truth, when necessary. Usually this was pretty benign.

But what happens if someone with whom you serve puts honesty above personal comfort and safety? Might that person be a threat to this tacit agreement between the institution and the individual? I recall a pilot in another squadron having a born-again moment and he wanted to use his squadron commander’s office as a confessional. This officer confided in their commander that he had lied about marijuana use in his entrance application. He admitted to his squadron commander that he did try it once in college. The commander thanked him for his honesty and then promptly began drawing up paperwork to end this pilot’s ten-year career in the air force. I always wondered if this might be because the commander believed that this person demonstrated a lack of common sense and that his scruples might someday threaten the mission of the squadron. I don’t know.

The interplay between truth, individuals and institutional health is not limited to people engaged in dangerous professions. Sometimes,institutions are willing to keep your secret hidden, in exchange for complete loyalty. One only has to look at the many closeted Gay Conservative Republican politicians who served and continue to serve in the US Senate and House. Surely, they often attack LGBT causes in order to deflect from their own orientation, many times the worst-kept secret in DC, but also to prove their fealty to their secret keepers.

I think this phenomena may be part of the reason Trump wants to "ban" transgender people from the military. I think someone like Trump worries about what honest people speaking honestly might eventually cost him personally. He probably worries that people who tell the truth about being transgender may not stop at this truth telling. And if being trans is outlawed in the military, then transgender people will have to count on that institution's blessings to protect them. In doing so, they will be deeply indebted to that institution, and will submit accordingly. One only has to look at the Trump Administration and how people have flushed their credibility down the toilet to say ridiculous things for him because they want to show their loyalty. And this kind of sacrifice always snowballs. They are now part of this farcical  machine and will perish outside of the machine if forced out. Quite simply, they have zero credibility outside of the machine because of what they had to do and say inside of the machine.

When I served, gay people were not allowed in the military. I had a Top Secret clearance with a special background investigation. Part of this background investigation check was to ferret out folks who might have been gay. In a meeting, we were told why gay people were not allowed in the military. It was because they could be easily targeted by Soviet spies. A gay American soldier with a top-secret clearance could meet a male Russian spy who seduces him. The spy then threatens the soldier to out him to his superiors unless he gives him classified info. This outing would then cause the military to court-martial the individual soldier - an incredible lever for a spy to use to extract info from a soldier.

When we were told this explanation, I found this an immediate head scratcher.

"But if someone were gay, and if being gay in the military was OK, wouldn't that Russian spy have zero control over the military member with classified material? I mean if the spy tried to out this guy, and it was OK for the soldier to be homosexual, the military would just say 'we don't care.' End of story. Making it illegal to be gay in the military actually increases chances of losing classified information to spies, I would think."

No one running the meeting had a rebuttal to my hypothesis. The only thing that comes to mind now is that being able to control someone with a secret about who and what they are outweighs any security risk.

And I suppose that is how it would be for transgender people who would serve if Trump gets his way and makes them say they are not transgender, or however he “thinks” this ban would go down.

Institutions have changed a lot since the 1980s and 1990s, and are changing even more. We should have always valued the truth, especially when that truth was about people telling you who they are. But, we are also being forced into it. Often, we are coming to value the truth because it is so obvious that, with social messaging, continual surveillance and the leaking of that surveillance, the truth ALWAYS comes out. Trump is set in a 1980s mindset thinking that he can subvert truth or create his own version of the “truth.” You can attribute this erroneous thinking to whatever you want.

For the last 18 years, I have worked for a large municipal fire department. In a lot of ways we have relationships that are like the military. We often find ourselves in very harrowing situations and every day we are integral players in heartbreaking circumstances. We often have to make snap decisions that involve life and death. Certainly this is an environment that begs for institutional and familial protection. But, we all now know that the truth always comes out and we act accordingly. I think there is a deeper respect for truth, especially individuals, as well, because our society is evolving in that direction. This social evolution has changed our institution, and I think it is better for it.

When I came out to my brothers and sisters in the fire department that I was trans, I did it because I just wanted to tell the truth. I knew I would feel ashamed if someone was attacked in our community and I stayed hidden, silent and safe. I also wanted to have that part of my brain which observed and acted to secret-keeping devoted to other things - things like my job, my family, my life. I think I could have hid out a lot longer, but it would have eventually came out anyway. Like the truth always does. The institutional support for my disclosure  has been amazing. The only thing that surpassed it was the personal responses from my fellow firefighters. I don't think that would have been the case 15 years ago. Certainly it would not have been the case in the 1980s, the place where our president's brain seems to have stopped, a place where truth often died to cover shame, failure or change.

In recent politics, you can see where some politicians have come to harvest what they have untruthfully sown. For example, the hatred they stoked against Obama was strategically centered around his Affordable Care Act. “Obamacare” was originally a Republican idea, but in order to “win” they had to abandon their own plan, label it with Obama’s name and then stoke hatred via their corporate minions. Their base (by no means a majority in the USA), couldn’t have been more compliant. So now here they are at the precipice of doing what they said they would do - repeal Obamacare. But, they can’t. They know that the same people who they lied to about the Affordable Care Act, the same people who then wrote them angry letters demanding repeal, are also many of the same people who will lose their insurance. And as wonderful as it may be to hold up two letters from the same constituent - one demanding repeal and the other condemning you for your vote to repeal, the truth is that the letter writer probably would not even begin to understand what they did to themselves. When you are steeped in untruths every day by a “news” source that doesn’t tell you the truth, in order to keep you comfortable in your misbeliefs, there will probably never be a personal reckoning, at least one that is self-observable.

And as a nation, we are going down a terrible path by allowing Conservative politicians and their media minions to avoid the truth at all costs. Imagine if there was a FoxNews channel that was targeted toward infants, and infants could understand it. Story after story would run on why crawling is God’s plan and that walking is an evil Liberal plot. “WALKING SUCKS!” Gotta keep your viewers comfortable and unchallenged if you don’t want them changing the channel. We've got Pablum to sell!

In America, today, you can ignore what scientists have to say, what historians say, what economists say, what philosophers say. You can be your own expert and if you are afraid enough, stubborn enough or lazy enough you can find a “truth” that fits the way you feel. When other nations are actually engaged in growth and a pursuit of truth over comfort, those other nations will surge ahead in the world while we remain rooted, withering in a dismal, misguided past.

My little bit of truth was good for me, good for those I serve with and good for the institution. Military leaders have said the very same thing about their own trans troops. They have said it right up until and right after Trump's pandering-to-the-bigot-base ban. And if Donald Trump possessed any powers of observation, he would be able to see the reckoning he is preparing for himself and those affiliated with him - adding one more dishonesty to a very dishonest presidency. That’s his story. And he's sticking to it.

As a nation, will we dead end by “sticking to the story,” or will we tell the uncomfortable truth, learn and grow from our discoveries and get America back on track? We all get to participate in answering that question, for better or worse.
Posted by EvilElf at 1:57 PM 4 comments: