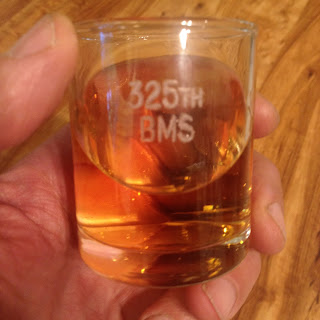 Really excited about my old bomb squadron's reunion this weekend. The 325th Bomb Squadron got its start in WW 2. Notably, on a mission (I think maybe the first mission of the squadron) they launched on a bombing raid over Germany. Everybody got shot down. The only guy who survived, so the story goes, was a guy who had been DNIF (Duties Not Involving Flying) that day. Basically he was sick in bed and then became the entire squadron. 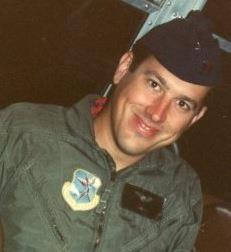 I started out as a navigator and then moved over to the radar navigator (bombardier) seat. Life was pretty simple. Mission plan one day and fly the next. Once every four weeks we would have to be on alert at the base. There were six crews with six members on each crew. each crew had a B-52 bristling with nukes parked next to where we slept. We would live in the alert facility for a week at a time, and then would get three and a half days off before we started flying training missions again. Actually, it was a lot of fun. Lots of pranks. Lots of movies and talk. I entered the Air Force as a Reagan Republican and left on the opposite end of the spectrum, thanks to conversations with my lefter-leaning friends on alert. I wonder how many can say that their military service did that? The Air Force was, in fact, the most socialist organization I have ever been a part of, and functioned very well. This somewhat creepy painting hung in the stairwell at the partially subterranean alert facility: 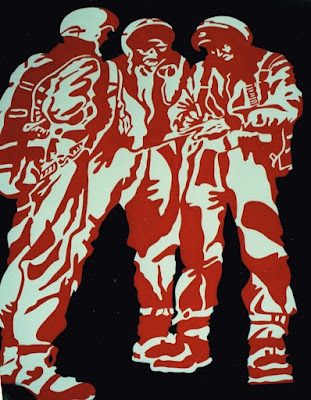 B-52s left Spokane about a year after I left B-52s. Before their departure we had the crash and that really made their subsequent absence in Spokane skies all the sadder. I used to look up when I heard that familiar noise of eight engines. I would think about who was on the plane as it passed overhead. I guess I do the same thing now when I hear a siren and see a fire truck go by. It's been cool being surrounded by friends in the air or on the ground, just about all the time. 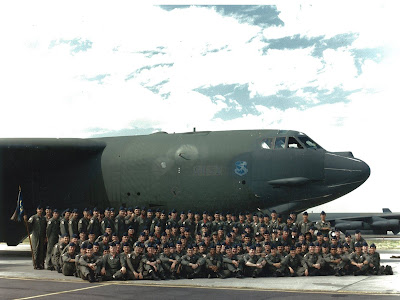 So, to say I'm excited about seeing old pals (and we are really old now) is an understatement. 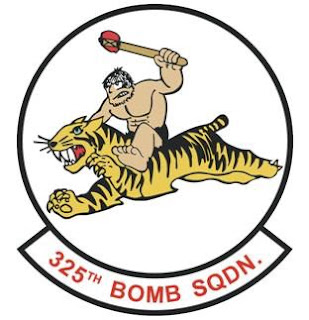 Posted by EvilElf at 3:49 PM No comments:

Yesterday, Sarah and I finally hiked the Pulaski trail. It's something we've wanted to do for a while, but never got around to. 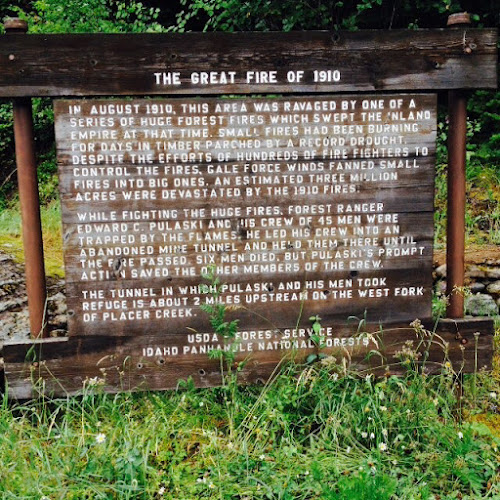 Timothy Egan's book The Big Burn recounts well the story of the 1910 fires. They wreaked havoc here in the Northwest and elsewhere. Entire towns were burned off the map. A lot of public policy and other political maneuverings grew out of these fires. The major story which transfixed the nation came out of Wallace, Idaho. If you read my posts, you know I am a big fan of this little town. 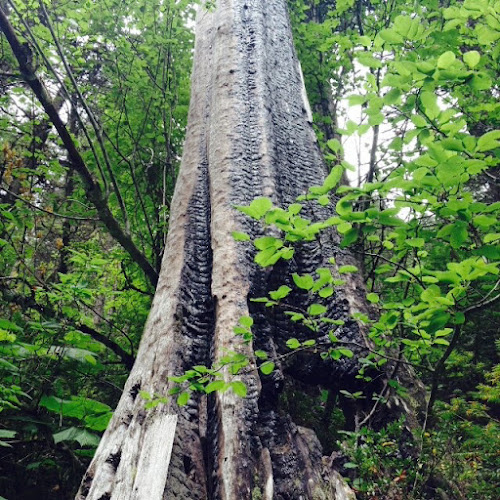 A man named Ed Pulaski, in a nutshell, knew that fire crews were about to be overrun by the fire and formulated a plan. He remembered an old mining tunnel and led 45 firefighters into its mouth. Pulaski soaked blankets in the mine's puddles and held them up at the entrance to create a barrier against the howling flames and crushing smoke. He eventually burnt his hands and became blinded from his efforts. At the beginning of the ordeal, guys began to panic and one made a break out of the mine and into the hellfire. Pulaski's response? He pulled out his revolver and promised to shoot anyone who tried to leave. How cool is that? When morning arrived, only six of the 45 men had died. 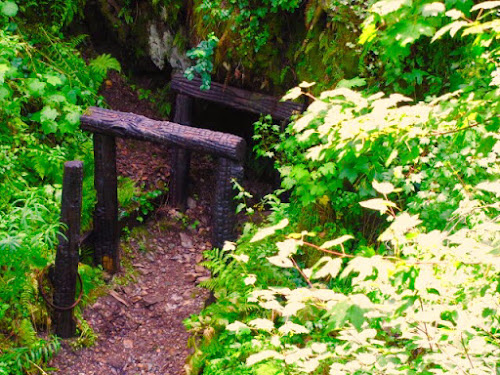 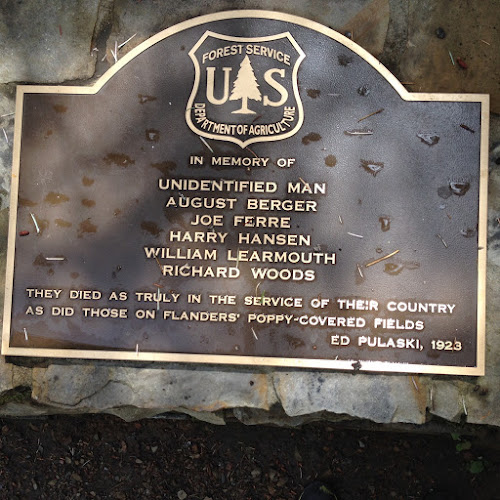 Climbing out of the tunnel and thirsty for water from Placer Creek, at the mouth of the mine, they found that its once clear current was now a befouled mess of debris and animal carcasses. The little water that flowed was an ashen, muddy elixir, unfit for drinking. Hard to imagine that today. 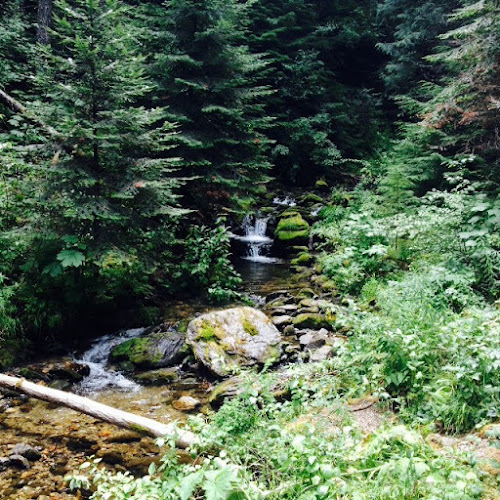 When they stumbled back into what was left of Wallace, they were offered whiskey and coffee. All they wanted was water. Pulaski checked on his home to make sure that it was still standing and that his family was safe. It was. They were. He then spent a long time in the hospital recovering from his wounds. Eventually his vision returned. His burns healed. The rest of his life he had difficulty breathing and his eyes never were the same.

When you hike to the cave, you are coming from the opposite direction that Pulaski took to seek its refuge. It's hard to imagine the terror of that day, while the beautiful creek rolls by, the wildflowers bloom and thimbleberries are begging to be eaten.

There are many sites and signage along the trail. The signs are hemmed in artistically by mounts of the fire tools which bear the inventor's moniker - pulaskis. This tool remains one of the most popular in wildland firefighting. Today, firefighters still use them to scrape an area out in the ground to create an area to deploy their fire shelters - their own personal tunnels - to survive being overrun by wildfire. Some die with their pulaskis still in their hands. 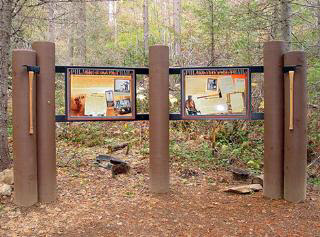 After that dramatic description, I realized I forgot to take a picture, so I borrowed this one from visit idaho.org. Thanks! You can see the pulaskis on the outer posts.

The hike is beautiful, historic and moderately easy with an elevation gain of 800 feet over two miles - terminating at an overlook of Pulaski's tunnel. After you hike back, there's coffee and whiskey waiting for you in Wallace.

Posted with Blogsy
Posted by EvilElf at 4:17 PM No comments: 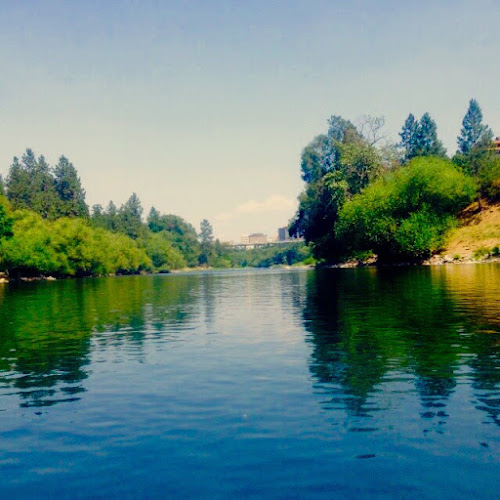 A couple of days ago, Sarah and I took a float down the Spokane River in tubes. This is something, for whatever reason, I never contemplated doing until this summer.

Back on the fourth, my crew was called to go check on a supposed campfire. The couple who called 9-1-1 met us at the Sandifur Bridge and directed us to the "confluence of the Spokane River and Latah Creek, about an eighth of a mile - that way." We parked the engine at the gate and hiked in about a half a mile carrying shovels and a pumpcan. The fire turned out to be a propane stove. Perfectly OK. On the very hot hike back, numerous tubers passed by in the river. We stopped and talked to people who were getting ready to enter the water at Sandifur, and it looked like a blast.

Sarah and I bought a couple of tubes at the General Store. We decided on the ones with cup holders. 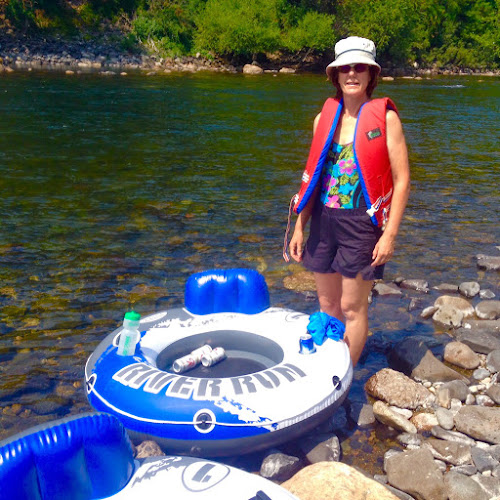 We put in at Peaceful Valley. Near a garbage can were the deflated remains of a tube of the same make and manufacture of the ones we had purchased. Not a good sign.

ROW was at the site with their bus. Folks were getting in rafts and inflatable kayaks to go on their professional adventure. We probably didn't help ROW out by launching next to them in our half-assed flotilla adquately stocked for the three-hour tour, the three-hour tour. 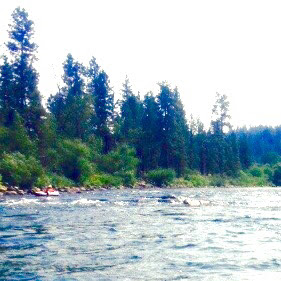 The water was cold. And as the river picked up steam, I was glad to be wearing the mandated life jacket. You have to pick your line pretty well to get through the rapids without scraping your ass, the river is so low.

I've been on a lot of rafting trips, and although the water was fairly tame, being in tubes made the river pretty exciting, at times. It's amazing how small a riffle looks from the bank, but when you are in it, it seems huge. 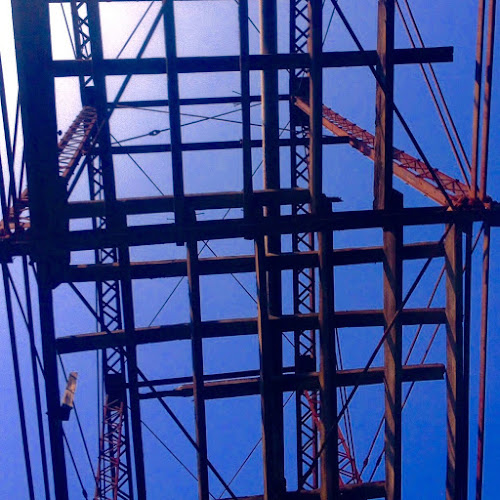 We floated under the old bridge at San Succi. We bobbed past many places where I've helped pull people out of the water, put out fires, stumbled upon little meth labs, etc. From the middle of the river, I couldn't even imagine any of that ever happening. The banks were devoid of litter. No shopping carts jutted out of the current. No flotsam or jetsam. Nothing creepy or gross peered up at me from Davy Jone's locker. It was cold, beautiful and fun. 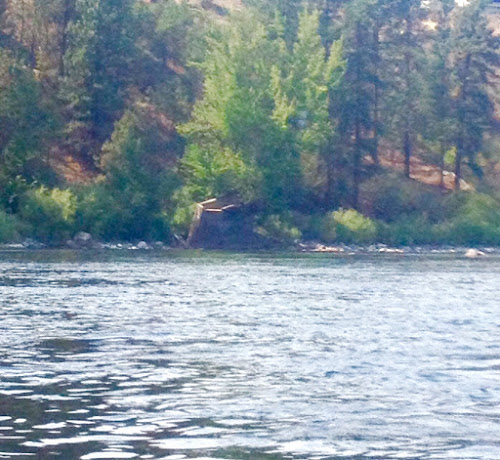 We took out just past the TJ Meenach Bridge, apologizing to fly fishermen and transients for the disturbance. 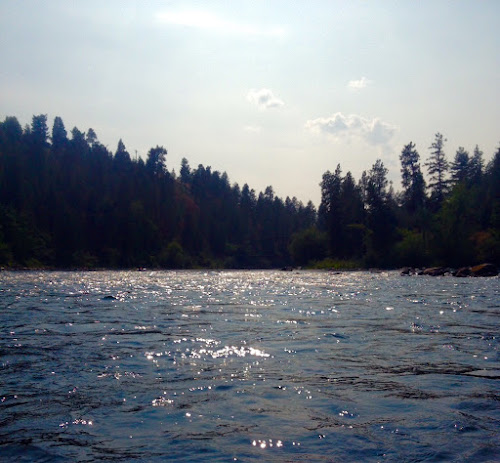 Posted with Blogsy
Posted by EvilElf at 8:54 AM No comments: 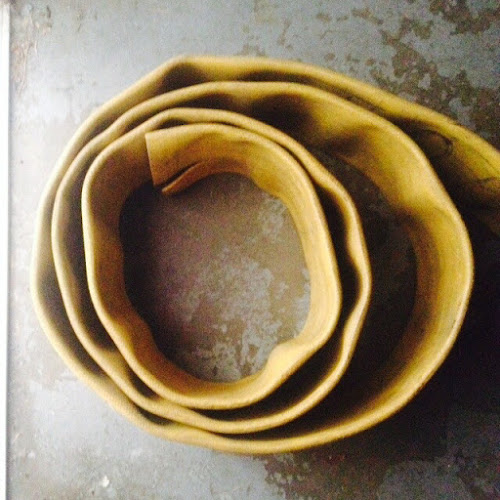 I made some running sandals yesterday from some scrap five-inch hose. This is the hose we use to get water from the hydrant to the fire engine.

The design was pretty straight forward. Trace your feet on paper, add a little buffer and then trace the paper on the rubber. I used a drill to make the holes for the shockchord laces. The tricky part was figuring out how to tie them. Seems like everyone has a favorite way of doing it and they have all made videos to show you how. 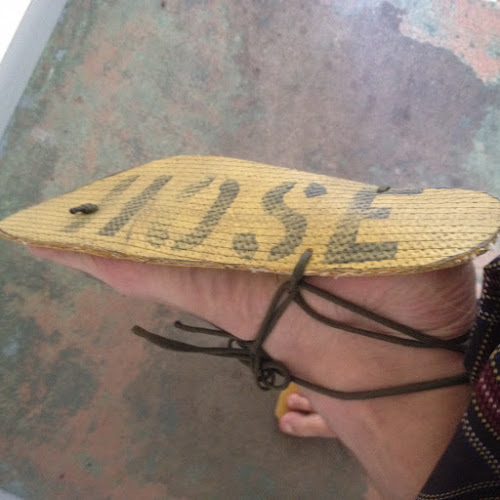 I had to move one of the holes because my right foot was sitting too far back on the rubber.

This morning I took them for a run - once around the park and then onto the High Drive trails. 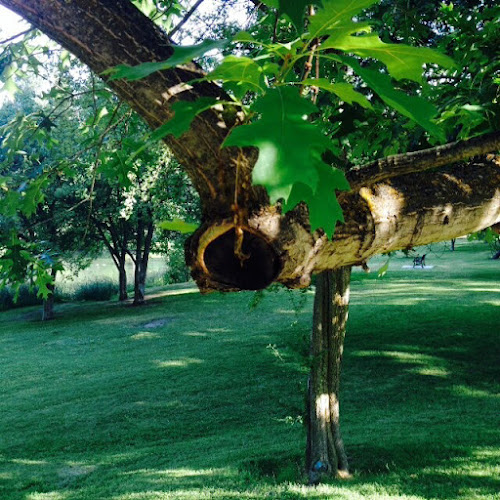 I found myself sprawled out on the east end of Cannon Hill Park. I had, apparently, ducked just in time to avoid planting my face into the end of this sawed-off branch. It did catch the top of my head, leaving a scratch and a bump. I don't think I lost consciousness but was dazed for a bit. And my head hurt. 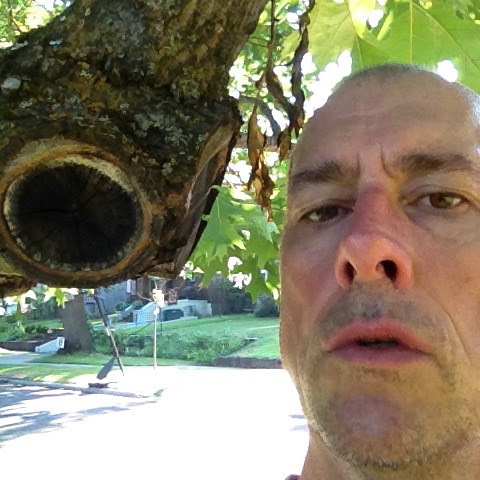 I dusted myself off and continued on for a little run on the trails. I found the sandals extremely loud on pavement. On the trails they protected my feet pretty well from rocks. One thing I worried about was picking up pebbles between the sandal and my foot. This did happen, but the pebbles came out really quickly while running. Encountering some sprinklers in a final lap around the park, my feet slipped around on the sandals. This makes sense because the tops of the sandals are the interior of the hose. It is purposely slick to reduce friction loss for better water pressure. 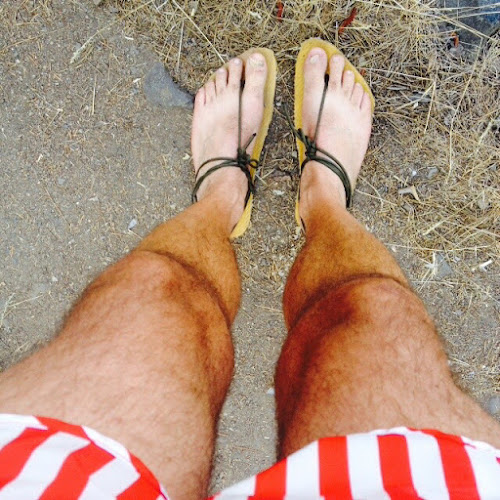 All in all. I think they worked pretty well. I wont run in these every day, only occasionally. I have an idea about using some other discarded material for the next pair, something a little more soft and grippy. These hose sandals are something I will probably wear as a daily replacement for flip flops and to weddings.

Posted with Blogsy
Posted by EvilElf at 5:22 PM No comments: