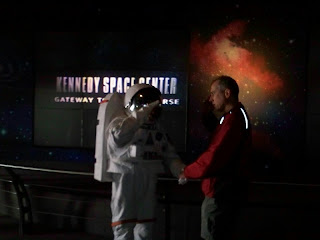 Are more people texting/talking on their cell phones than before we made it a secondary offense? 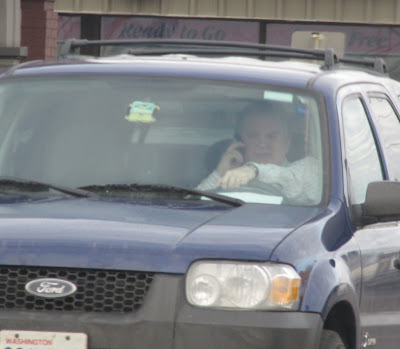 Was out running this morning and witnessed a Suburban slowly weaving its way down the street. As it passed (extremely closely) I noticed the driver was typing away on her cell phone. I can only imagine the gravity and sagacity of the text "conversation":

What R U doing
I M driving
Me 2
LOL
LOL

Look around next time you're on the streets. It seems as if more drivers are texting and talking than aren't. The current wimpy cell phone law has had no effect. 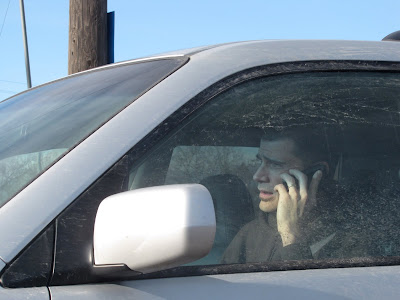 I must admit the texting thing pisses me off anyway. Ignore the people around you. Ignore what is presently going on, so you can carry on an inane "conversation" with another bored person. That's bullshit. It's especially cool when you are at the movie theater and someone in front of you basically shines a flashlight in your eyes by texting on their beacon of a phone.

I guess it's the purposeful disconnection from the surrounding environment and those around them that texters pursue that really sets me off - all the more so when they are hurtling down the road in their steel behemoths. All I have to defend myself from their distractedness and disconnectedness is my running shoes or bicycle pump.

The red light cameras could go to work on this right away.

How about bounty hunting? Pedestrians, passengers and cyclists could take pictures of drivers texting/talking on their phones and turn them in. Split the ticket down the middle. Half goes to the bounty hunter. The other half to the city. People with windows tinted so darkly that you can't see what they are doing would be presumed guilty. I thought these windows were against the law anyway. 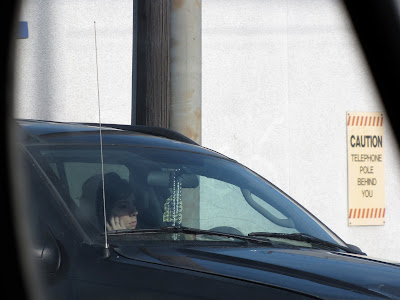 Send your pictures to me. I will post them here. If nothing else, it should make for some interesting art.

Taking these pictures isn't as easy as it looks. I was really slow on the draw for this one which would have been cool because it was a big corporate delivery truck: 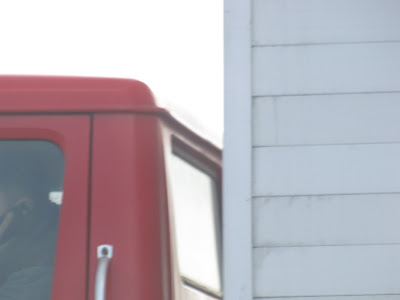 On the hunt, you see many texters at work behind the wheel, but it's harder to photograph them usually. It's almost like they know what they are doing is wrong and so they are much more furtive in their behavior.

What do you think? Would this be a cool thing to promote or is it kind of an Orwellian affront?
Posted by EvilElf at 10:14 AM 9 comments:

Zombie Night Out and the Miracle of Cycling!

My high school friends and college roommates, Lance, Rich and I went to the original Dawn of the Dead movie in 1978. A few years ago there was a remake. I thought about how it would be a lot of fun to have a reunion of sorts around this zombie redux.

Rich and I have had our share of reunions. Aside from high school and college graduations. We've had USAF OTS and Spokane/Spokane Valley Firefighter Recruit School graduations. Rich and I have led lives that have, at times, mirrored each other. Lance, on the other hand is much more elusive. Here is a picture taken in 2004 or 2005 right before we saw the remake of Dawn of the Dead, which was not as good as the original. I have never been one to go in for zombies that sprint or do more than shuffle. I mean WTF, they're dead already. That's Lance in the middle. Rich is on the left and I'm on the right striking zombieish poses. 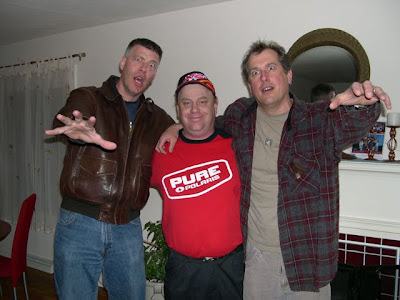 Well, here's the picture from the night before last when we saw ZombieLand at the Garland. Yes, in this movie the zombies are a little too fast at times for my liking, but live and yet live and yet live again is my new motto. Lance is still in the middle. Rich and I have switched sides. 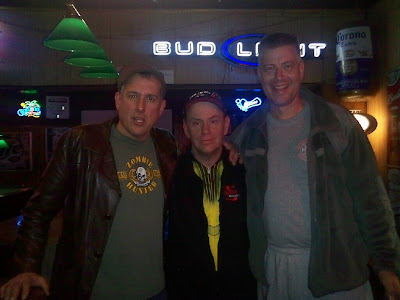 Lance lost a ton of weight. Between photos, he had gotten even heavier than the first picture. At our 30th high school reunion in 2008, Lance had dumped much of the weight. How?

He did it by changing one thing in his life. His bicycle became his primary vehicle. No dieting. No workout regimen other than how he gets from Point A to Point B. Although he does enjoy cycling so much he participates in a lot of just-for-fun rides too.

Lance told me that bicycling saved his life. I believe him. He, like I, acknowledge that it is the most fun way to get anywhere. Like all of us, he has had his share of close calls, once getting clocked in the head by an RV's mirror.

Lance is also a pied-piper of cycling. He has gifted many people with bicycles and has organized rides for others.

When we were kids, Lance was the ultimate motorhead. He could tell you the part number for just about any oil filter and could rebuild any motor. His high school ride was a '41 Chevy. Today, he shuns cars as much as possible and acknowledges that the bicycle is probably the greatest invention and cars close to the worst. Maybe I am putting words in Lance's mouth, but I think he would say something like that.

Let your bicycle be your inoculation against the Zombie Disease gripping our nation. Perhaps you know this sickness better by its scientific name - automobile centric lifestyle syndrome.
Posted by EvilElf at 10:13 AM 3 comments: 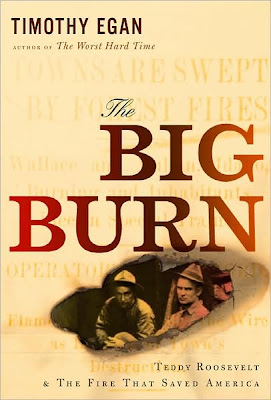 Just finished reading The Big Burn by Timothy Egan. A great read. All the action takes place within about a hundred miles of Spokane. I can't get enough of books like these, ones that chronicle a historic event with good characterizations. When you read about the political temperament of the early 20th century, you realize that the same battles are being fought today by the same characters. Although, it seems the citizenry was much more engaged at the time and weren't so easily buffaloed. This morning's article detailing the GOP's attempt to "protect" Obama by condemning Harry Reid because of a racist remark he made years ago comes to mind. Pathetic. Republican attempts at this kind of shameless chicanery were met with scorn and ridicule in the aftermath of the fire of 1910 by the press, by the people and at the ballot box.

I have a lot of local exploring to do this summer, thanks to this book. One thing though. The author talks about how we in eastern Washington refer to a wind blowing from the Palouse as a "Palouser." I had never heard of "palouser." Talking to others, no one else has either. Have you ever heard this word before? Pal Louser? Puh Loser? P'Looser?

I read In Pharoah's Army a few weeks ago and the author claimed that during the Vietnam War he watched The Gong Show. Only if he had a time machine, I think. When I read things like the Palouser and the TV reference, it makes my undiagnosed OCD really flare.
Posted by EvilElf at 12:26 PM 6 comments: 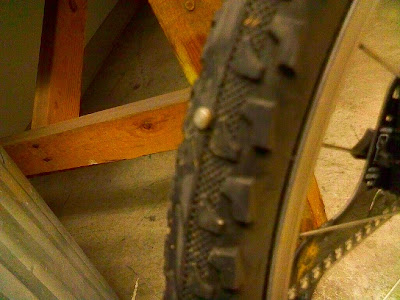 An out-of-focus picture of what I picked up on Broadway and Monroe about 7 am Saturday morning. Luckily, I had removed the Christmas tree from the Xtracycle which made pushing easier. I was a little conflicted when this happened. Do I patch the tube here or do I wait until I get to work? In the dark I didn't know I had picked up a nail, so I tried pumping air into the tube. Understandably, no luck with that, so I walked the last mile or so to work. This turned out to be the right decision.

The tube was pretty new. I sprung for a heavier model with Slime in it. I thought this might be a good idea, as weight is no object for this behemoth of a bike. Understandably, the Slime was no match for the nail. After I patched it and fired up the air compressor to inflate the tube, I found there were a few more holes on the roadside of the tube. The hubside wasn't looking too hot either. Under pressure, the green Slime was flying like an ectoplasmic fountain.

I had a spare tube and some duct tape, so I made it home fine. I think it's time to get a new tire.
Posted by EvilElf at 7:37 AM 3 comments:

Sarah was running the day before yesterday and spotted a bald eagle soaring above High Drive. Yesterday, we went for a run and tried to go swimming on the loop back home, but the pool was full. So, instead we walked around Downtown, stopped at Merlyn's to say hello to John Waite and then walked home. Last night we had a great time at our neighbor's house, ringing in the new year.

Spokane is a great place. You can go for a walk and see a bald eagle, coyote, deer or moose and continue on the path for a movie or a great meal. If you stumble on the trail, you can provide a great meal for the fauna. 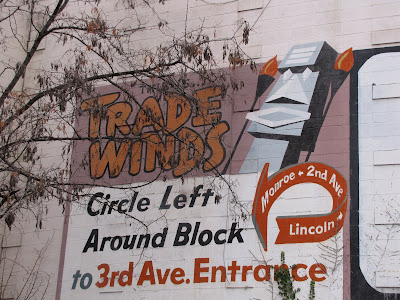 I am not sure what, yet. I printed up t-shirts some years ago with this design: 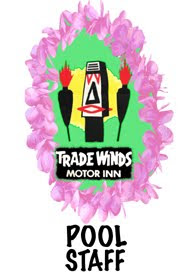 At the time, the Tradewind's pool was full of shopping carts, debris and life aquatic. Sarah and I sometimes fantasize about the Tradewinds being a cool retro tiki kinda place to stay. Molly's across the street would make a fine tiki bar/restaurant too.

The old Tradewinds on N Division sports little in the way of Polynesia anymore. The Downtown Tradewinds sign and logo will probably go the way of the Downtowner's someday. 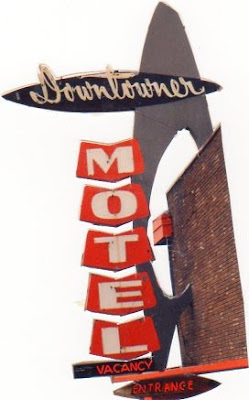 Which is a shame. Here is a link to the Flickr page where I found this image. The photographer has done a great job capturing Spokane's disappearing signage.
Posted by EvilElf at 1:44 PM 1 comment: