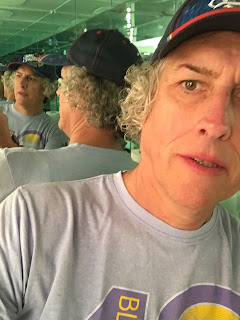 I recently marked the one-year anniversary of starting hormone replacement therapy (HRT). Twenty-one years prior I told my wife that I thought I might be transgender. In that conversation, I couldn't quit shaking as I told her my story. I had so much shame and fear in my voice. It was a secret we kept for 21 years before she asked me to tell our three sons.

Soon after, I started seeing a therapist who definitively and clinically verified my suspicions.

So what to do? Sarah and I decided to take a break on making any big decisions on how, or if, to proceed after I told our kids. The months leading up to actually starting HRT were sad, exciting and really heavy for me. I knew I was leaning toward doing it. I broke the news to my family doctor about the potential of starting in September.

As I recall, my beginning testosterone level was 550 ng/dl and my estradiol levels were 13 pg/dl. Pretty normal for a guy. Now, a year later, I am less than 10 for testosterone and edging toward 200 for estradiol. The numbers are good, but there is a lot more to the story.

Within a couple of weeks of starting, I noticed that I seemed to be a lot more focused at work and generally a little more at peace. A lot of this could have been a placebo effect or just feeling the relief of having made a decision.

I felt a lot less emotional about things and I wondered if this is what people on antidepressants feel. I felt good.

At two months, I could start feeling some physical changes - soreness in the chest area and changes down south, if you know what I mean. I became even more focused. And emotions seemed to be real - right in my face, but not in a bad way. I felt them but it was just observable data. The only time I found them overwhelming was when I became really, really happy.  I was now always operating at such a high level of happiness,that when something extraordinarily beautiful or happy happened, I really had no place to put it, so it would squirt out of my eyes.

I came out at work after seven months of being on hormones. My therapist figured I would have to come out after three months due to the physical changes. But it wasn’t until about five months that I started thinking my body might inadvertently out me.

As I've written about in so many posts, my coming out at work was an amazing, beautiful experience. And it still amazes me.

I don't have much fear left in me. In fact, it is hard to even conjure it up. In the past, I could easily scare myself with the what-ifs. I would have contingency plan after contingency plan for all things in my life. Now I wake up and just live my life. That's pretty much it. And now I know that is how most people live their lives too. I had no idea.

This lack of fear and the ability to focus better has had some downsides. I am not as willing to make things "work out" for others. I am not as easy-going about some things. Some things don't matter as much to me.

I have found it increasingly difficult to write about the weird-ass shitshow that is now our national political scene. In fact, that's what this article was going to be about. But, my really "interesting" points made me yawn to even think about writing them. Why bother? You either get it or you don't. And it's not my job to fix that!

In the past, I had an endless stream of creative projects to keep myself busy, outside of work. Now, I have to really make myself do them. I can just sit and do nothing! At least for a few minutes.

In a lot of ways, I find my career a lot more interesting too. I tend to be more engaged in it, even on my days off.

I do the things I do and say what I say mostly because I just want to. No thoughts of survival, or getting ahead, or guilt, or shame, or worrying about hurting someone's feelings. I don't think I am becoming a jerk. If I am, someone please tell me.

Whatever the combo of HRT and coming out did, it made me operate from a more “authentic” (I hate that word) and honest place.  I am a kinder person, a saner person, a happier person and a braver person.

Things between me and Sarah are different, but in so many ways even better than before. We always had a great marriage, but I am now able to be more honest. I can now see where my love for her springs from and it is a pretty deep, very beautiful place. I love her more now than ever. She has been an amazing spouse and friend.

The other day, I was at the hospital, having ridden in with the ambulance crew with an elderly patient. I noticed there were some nurses and doctors staring at me, as I washed my hands. I realized that it was all good. These folks are compassionate scientists. They were just observing. Cool. As I stood at the sink, I thought about the strength between me and Sarah. We are both logical people. We have always been compassionate scientists, as well. Not only in our professions, but in our personal lives and how we see the world. I am so fortunate to have her with me.

All of my family, my sons, my daughter-in-law, my grandkids, my mom, sisters, brother, everyone has been so solid! It hasn’t been easy and I apologize for the work that you’ve had to do.

At work, I feel like I haven't really lost much, if any, strength. However, my stamina is not as good. That may also be a product of just getting older.

My running is terrible right now. And it's not just because I am so much slower. Running is so boring now! I would have never allowed this thought before, let alone said it. But, running is good for me and I will soldier on and make friends with it again on some new terms. Maybe I will wait until the smoky air clears though.

I am taking estradiol and spiranolactone. The spiro blocks the testosterone and is a diuretic so it makes me have to pee more. The trade off is that my prostate doesn't make me have to get up and pee during the night, anymore. I am getting really good sleep at night, on my days off. The estrogen from the estradiol has moved a lot of body mass around on my frame. It has made my face look a little different and thickened and lengthened my hair. I have kept a monthly log of body measurements. The change is real, although I pretty much weigh the same.

My friendships have deepened and I have made so many wonderful new friends over the last year. I think that my being honest with others about something for which I was so ashamed and afraid might make me a person others want to be with. Maybe it’s also because I like being with myself now. When I walk down the street, if anyone looks at me, it is usually with a smile of happiness and a nod of encouragement. People who I don't know will sometimes shout out "Hi Maeve!" Unbelievable.

Twenty-two years ago, when I told Sarah about me, I said that I would never consider transitioning. I told her that that ship had  sailed so long ago. A year ago, in discussing wearing gender-appropriate clothing with my therapist, I said I would never do it until I could 100% pass because I didn't want to look like a man wearing a dress. And all that has faded away. Now, I am doing what I want to do, and that is simply one thing - I am telling the truth.

We have had some incredibly sad calls this summer at work. On one, my crew and I discovered a little boy who had tragically drowned in the river. I rode in with him in the ambulance and was part of the team that attempted resuscitation. Just about everyone on the call was devastated. In the past, I wouldn’t have been. I would have just stuffed it with all the other bad calls and all the destroyed lives that I have had to be a part of. This time, I could feel it, and deal with it. It was upfront and in my face. A year ago, it wouldn’t have been. I would have to confront it later when it morphed into anxiety or something else. Who knows, HRT and coming out may have saved my own life. Depression, anxiety and suicide are a pretty constant threat for those in fire and EMS professions.

The best change, after a year of HRT and coming out, is that when I look in the mirror, I really see myself. My real self, my truthful self, looking back at me. It makes me smile and when I see myself smile in the mirror, the happiness increases. It’s a weird and wonderful positive feedback loop. The happiness is still overwhelming even after I look away. Sometimes, I don't know where to put this joy. It squirts out of my eyes.