In this morning's news, in tomorrow's paper, a local story of murder and a ghastly tale of body disposal. What started all of this? According to the Spokesman-Review:


"Hart has been in custody since authorities discovered the body of Regan Jolley, 33, in the detached garage of a Nine Mile Falls home. The couple had been dating a few weeks, according to friends, and the relationship was fraught with tension. A woman who lived at the home with the couple said Hart yelled at Jolley for disrespecting fish during a group fishing trip a few weeks before the murder."

This reminds me of:

If you have a youth who is disrespectin', get him fishrespectin'! so the advertisement went. There were shirts for sale like this:

Simpler times back then. I wonder what ever happened to the founder of this organization, Dr. Harriman Nelson.

I've been making hard cider for quite a few years. Ever since they started pasteurizing cider at Greenbluff, I figured why not just use store-bought apple cider. So for the last three years or so I've been making apple cider using Costco apple juice. In the recipe, I use sulfites, brown sugar, yeast nutrient, ascorbic acid and other goodies.

This year I decided to be a little more primitive. I just took the apple juice, pitched a little Belgian beer yeast that I had laying around in the refrigerator, put an airlock on it, and let her sit.

After fermenting for a couple of weeks, I took the airlock off and put the cap back on. It became very carbonated, so much so that I burped the bottle throughout the days for fear of it exploding. It is some of the best cider I think I've ever glugged.

Posted by EvilElf at 3:32 PM No comments:

Dirtbag on the prowl

A neighbor had a bike stolen from their garage. The thief looks like this:

Apparently he comes every morning after midnight to see if their garage is still locked. Here's the full picture and description from the neighbor:

This van has the sweetest camping spot around - the duck pond parking lot at Manito Park. I think it's been parked there for about a month. Every once in a while it will take off for a day or two, then it's back.

I saw the driver sitting in it this morning for the first time.

It looks like a nice vehicle and there's never a mess around it. I wonder how long he will stay and what the next stop is.

Posted by EvilElf at 1:49 PM No comments: 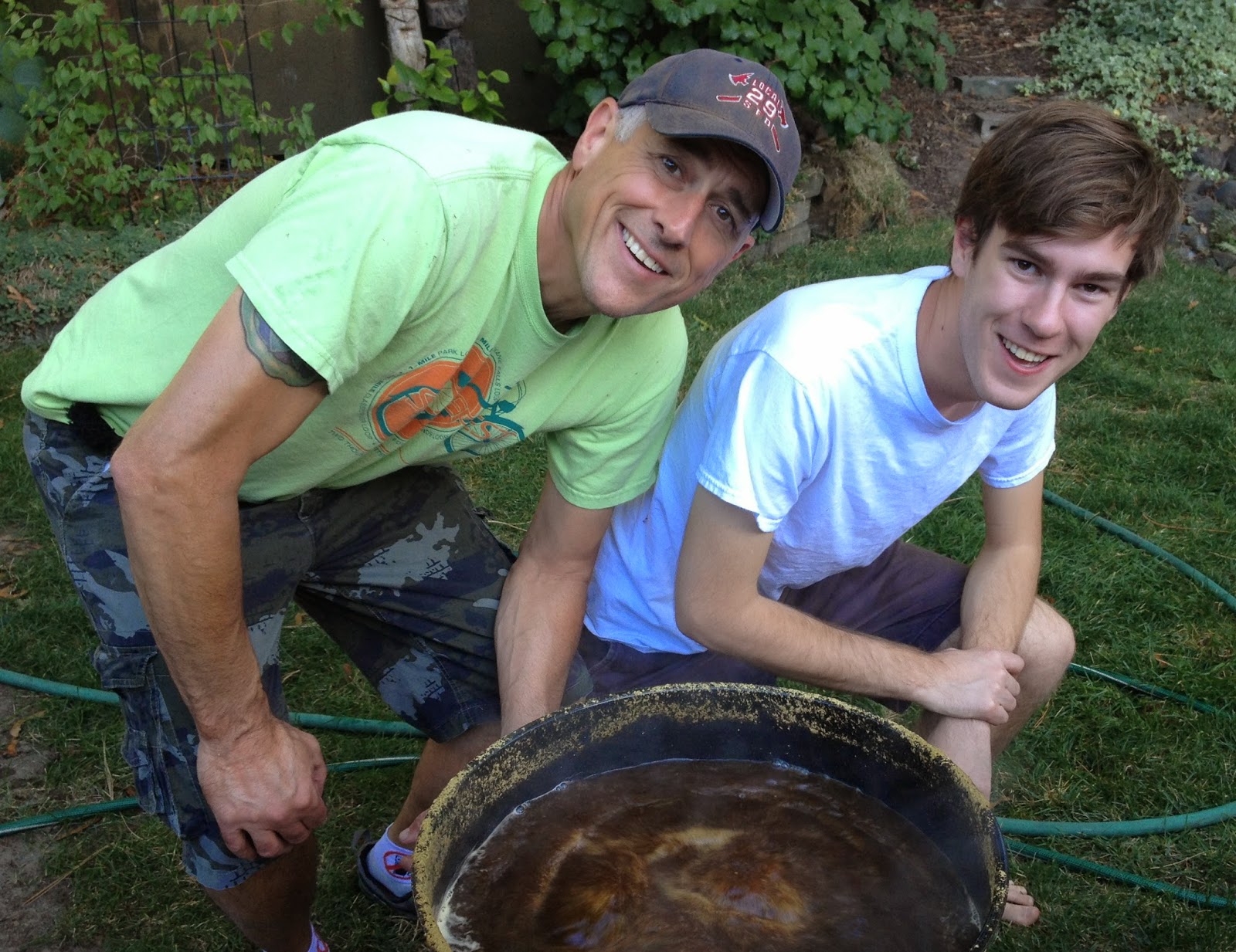 A day together brewing a commemoratory brown ale. For, indeed, this blog - Spokanarama - celebrates its ten-year anniversary this very day. Huzzah!
Posted by EvilElf at 7:37 PM 2 comments: 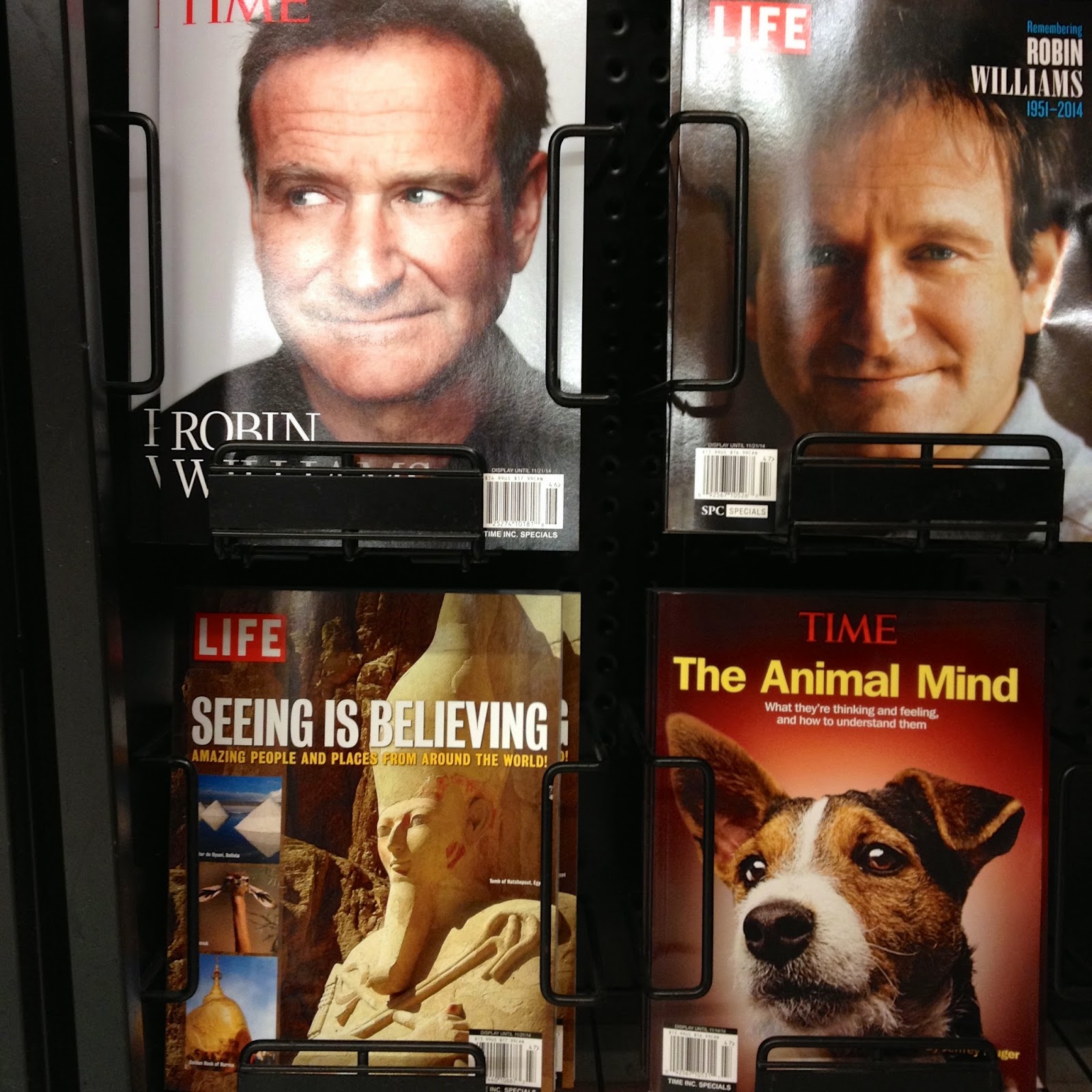 Saw these magazines while in the checkout line at Rosauers. I am not really sure why they caught me eye, just that they did. Life and Time. It's what we gots.

Went down the internet hole the other day. An Outside Magazine link had me looking at rooftop tents for cars. This just another chapter in my never-ending quest to turn the unfortunate HHR into the ultimate outdoor recreation vessel. 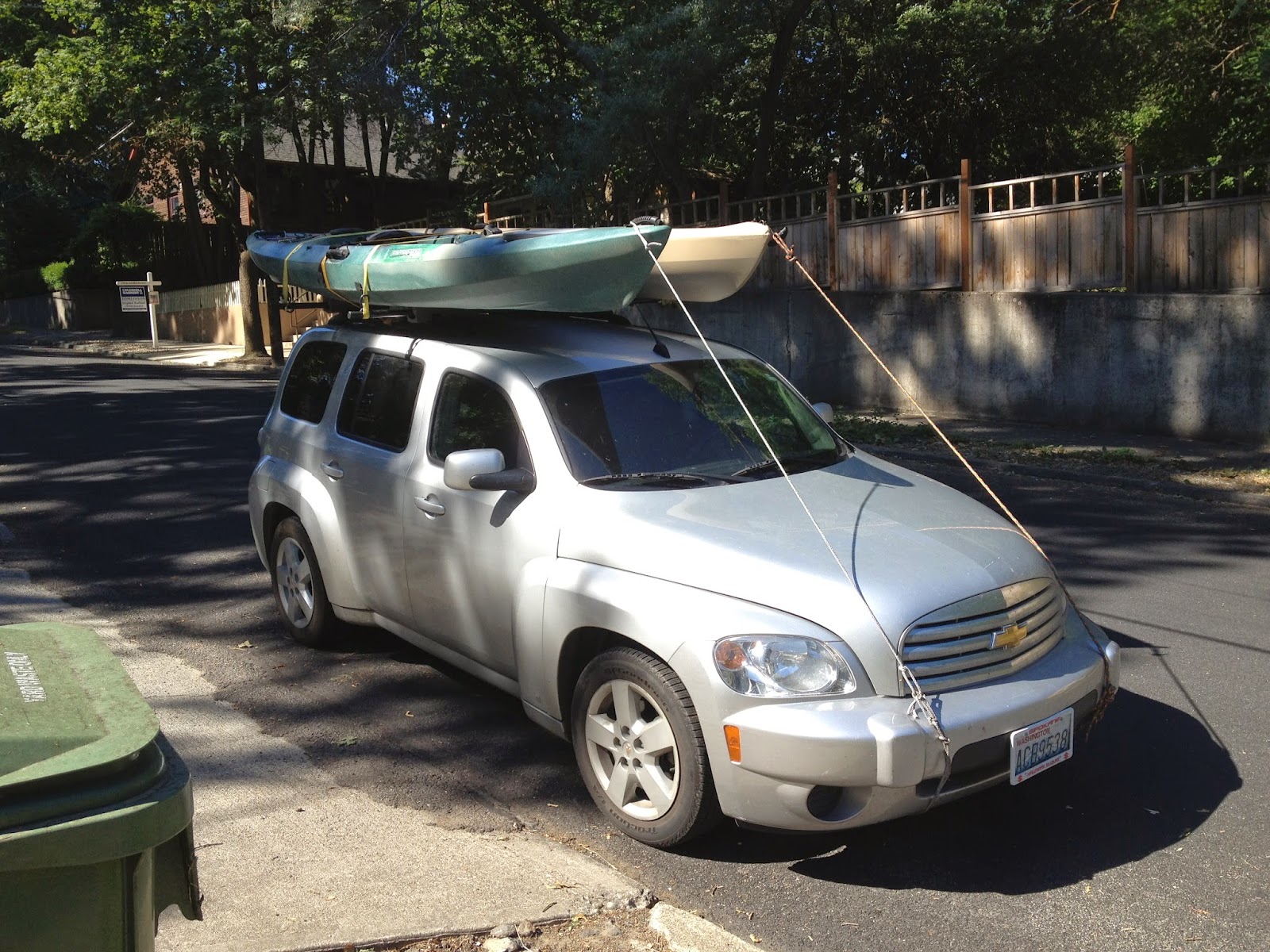 I want very badly to make this happen, but from the beginning it's been a fool's errand. Did you know that unless you already have factory roof racks installed that there are no Yakima or Thule racks that will work on the HHR? Roof rack capacity is 150 pounds. Want to go over a mountain pass in the winter? Well, you better not need chains because the owner's manual forbids this. How about a little trailer to pull behind? Cool, as long as it is less than 1000 pounds.

I was suckered into this car by the good gas mileage and that the seats all fold flat for potential car sleeping. Which I did in Montana two weeks ago. If I was a lot shorter, it would have been pretty comfortable. Still, the HHR with all it's gonna-kill-you-when-the-key-falls-out-at-70-mph consumer safety recalls is one of the nicest cars I've ever owned. Comfortable. Quiet. Reliable. Decent stereo. 30 mpg on the freeway.

Further down the rabbit hole. Hey, I wonder if they make a cot that has a tent attached to it? Well, sure they do! Even in a size that both Sarah and I could fit in. You just open up the cot and out pops up the tent over your head. That seems really nifty.

Much of my curiosity and research was driven by my desire to stall over other things I should be doing. It's when I do my best work.

I started thinking about all the tents we have had over the years. All those opulent tents. I needed to set the survivors up. I needed to grasp the scope. Here they are: 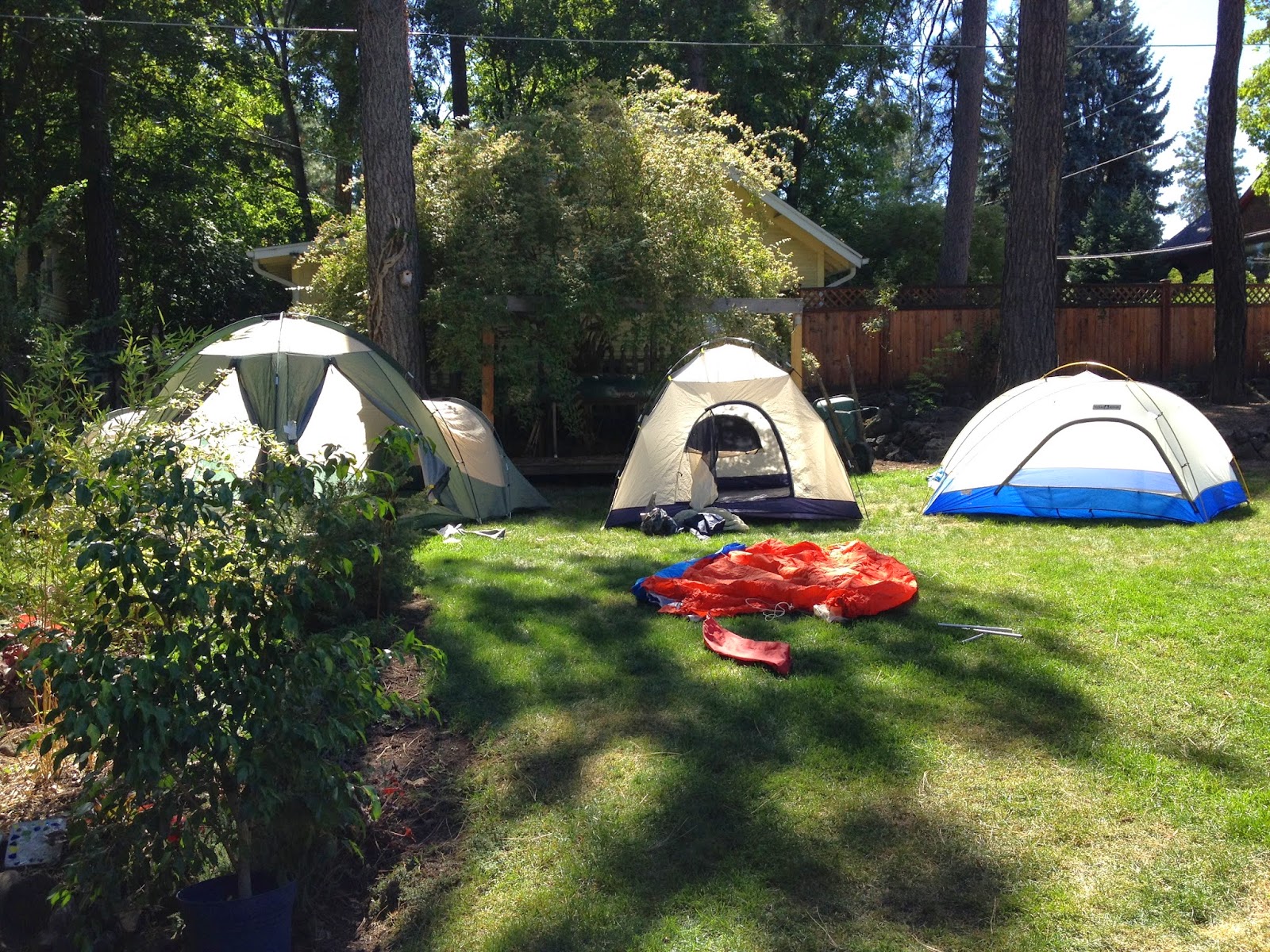 The orange blob in the foreground is a pup tent from 1983. It has seen a lot of duty, but one of the tent poles is MIA. Also not set up was my half-ass hammock. From left to right: 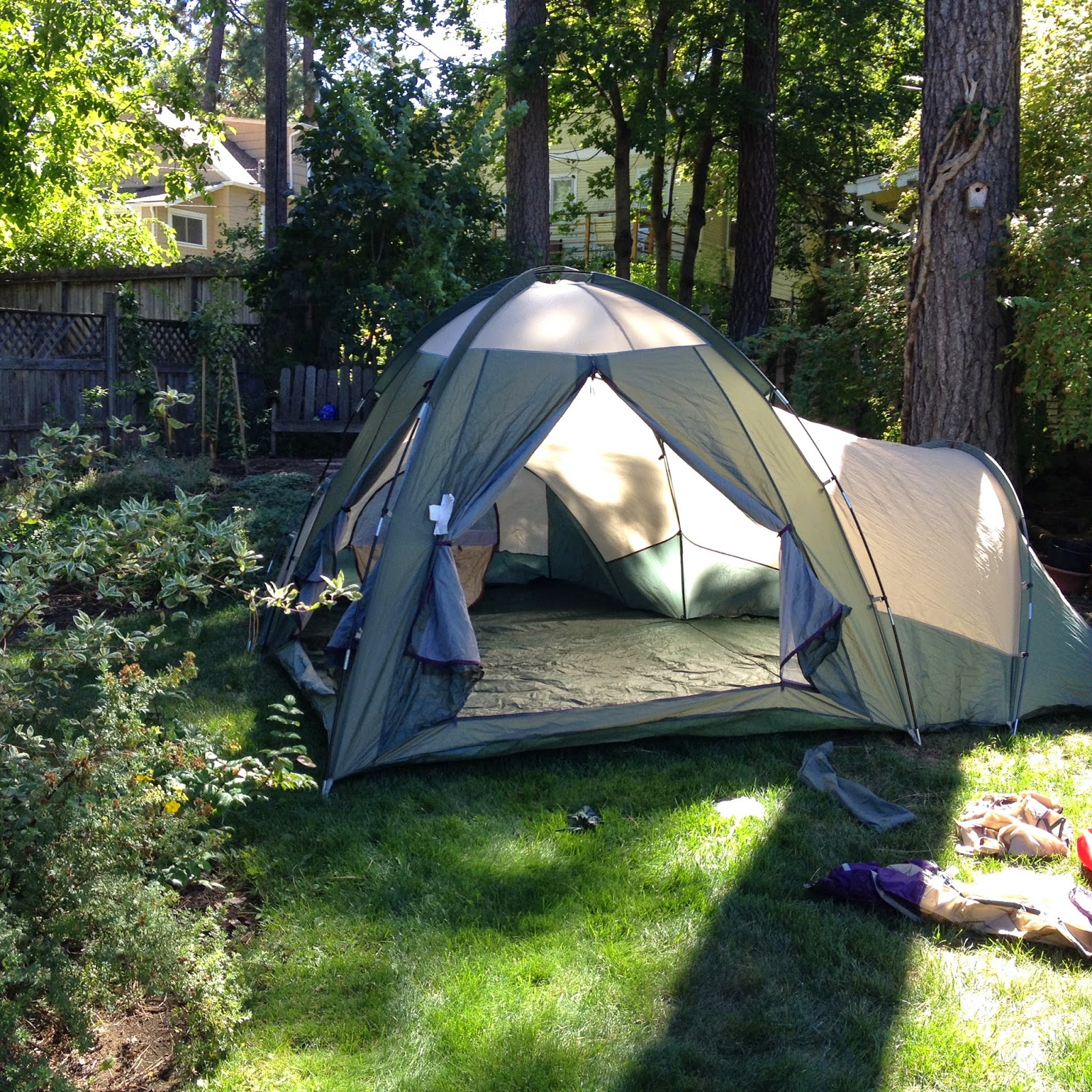 The Coleman 9 x 9 ft with two 4.5 vestibules. We could fit all five of us in it back in the day when the kids were kids. 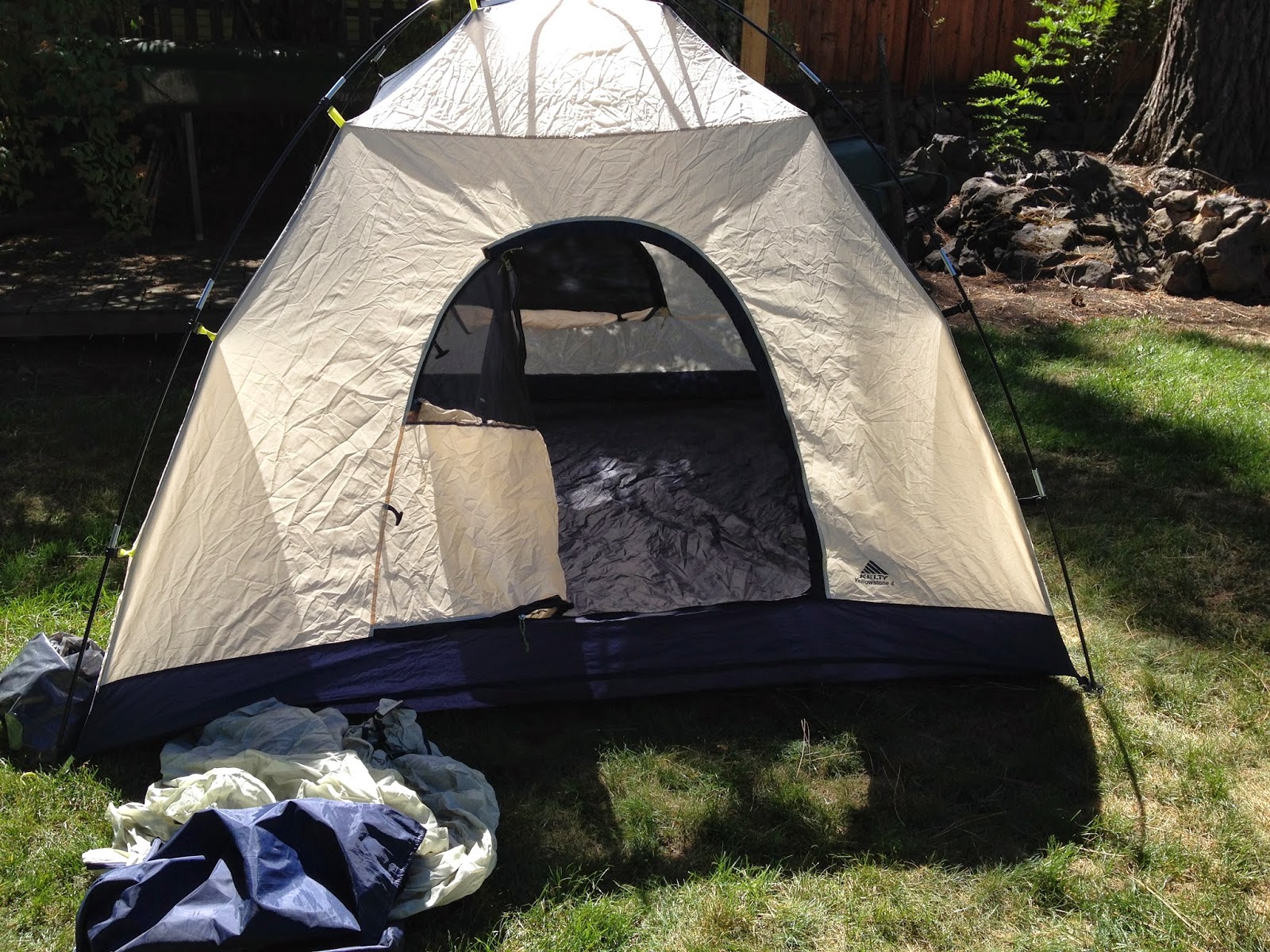 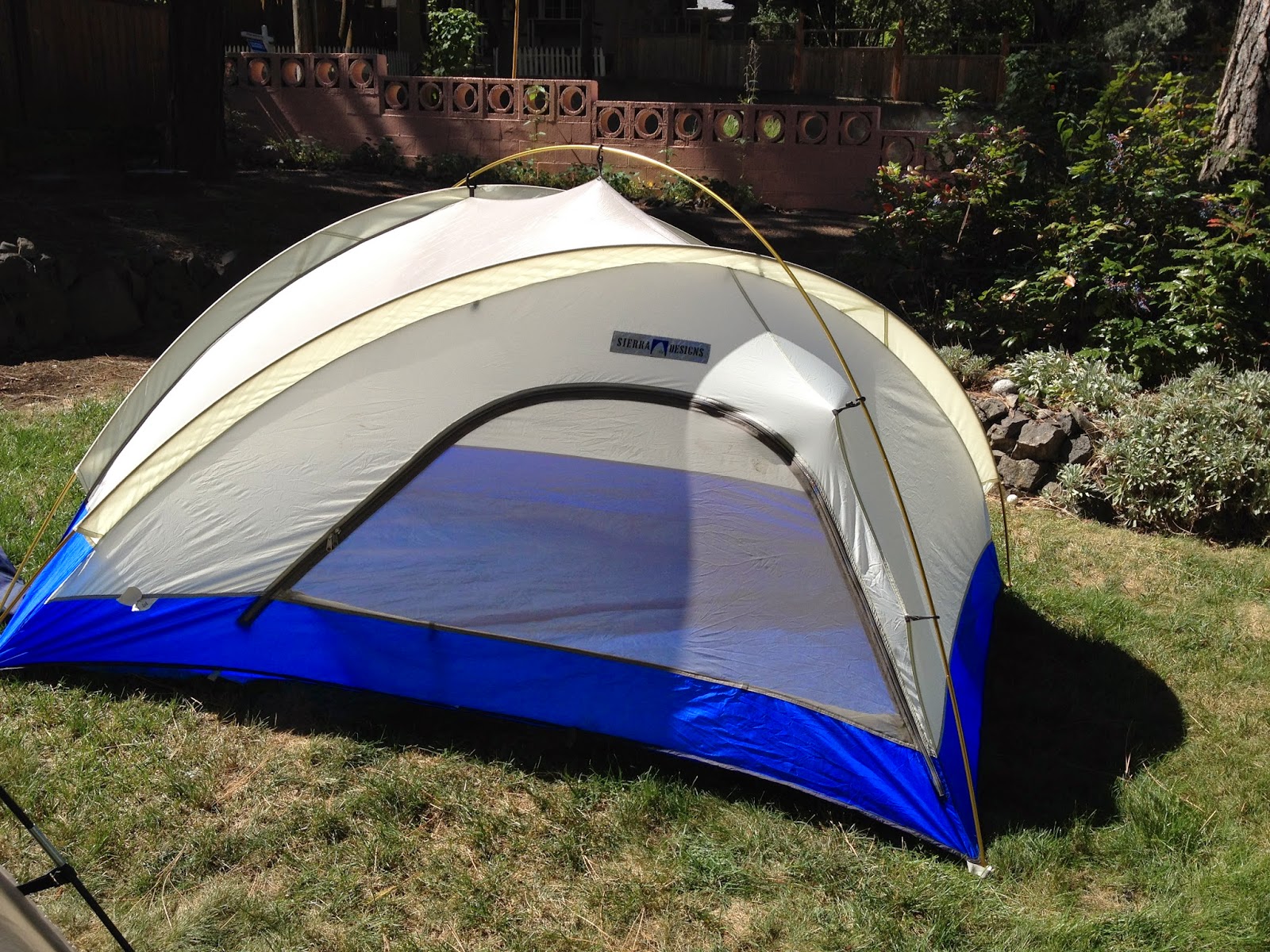 By the time all were set up, I was really sweating and in need of a beer. By the time I took them all down, I wanted not for cartop tents nor tents which rest upon cots which fold.

I think there is some consumer aversion therapy in this exercise. I can honestly say each tent has served, and will continue to serve a select purpose. Two people backpacking. Two adults and two small children backpacking. The entire family car camping. Right now, I am sure I could carve out a niche into which I could cram a tentcot or cottent. But, instead I find my self content while still remaining pro-tent.
Posted by EvilElf at 11:30 AM 2 comments: