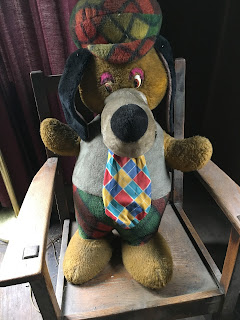 OK. I came out to my work on April 14th, 2017. It was Good Friday. I had my message all loaded up on my phone. We had a party down at NYne and at 1630, Sarah hit the SEND button on my phone and the email went to everyone at work. Brian, our fire chief, waiting for me to send the message, immediately followed up with a message to all SFD employees that was kind, supportive and laid down the law. He then came to the bar and bought everyone a round of Fireball. We partied until after midnight! A first for me in a long time.

On the afternoon of the big Good Friday coming out, I realized I really didn't have anything to wear for that night. I guess, over the years, I should have been wearing more clothes that fit my true but buried-in-shame gender. But, I never really did much of that. So, I didn't have many female clothes. Sarah took me down to the Reclothery, a consignment shop for really nice used clothes. I bought three shirts there. On the way home I received a reply to a text I had sent earlier.

The response was from someone very close to me. I started reading it out loud to Sarah as we were driving home from shopping. Over the last few days, I had been texting some of my friends at work to let them know of my transness and my impending Good Friday email to the job. In reply to my disclosure, I had been receiving nothing but very supportive and loving messages. I was expecting the same from this person. But, what I received was the opposite. It was a very detailed, very thorough reply. It was angry and it was mean. It was demeaning. There was an airing of grievances, the likes of which not even Festivus has ever witnessed. Sarah parked the car in the garage as I continued to read it out loud. When I finally finished, I think she was ready for me to start crying - not so much for the content hurting me but for the source - someone who I have known for decades. Someone I love. Instead, I said, "F@#k that guy." And then I typed a reply which was pretty much - "I'm disappointed in you." And then we got dressed and walked down to the party. We had a job to do.

It was a job and it was a party. Lots of friends, mostly from work, people I have known for a long time. There were also some new-found friends from the trans community. There were some of my sisters. I did not invite one sister. Her husband had told me that she had collapsed on the floor the evening after I came out to her, sobbing "My brother is sick. He's just sick." I did not want to cause her any more grief or stress. She is a good person and has been nice to me. I did not want to hurt her. I think everyone had a good time together that night.

I followed up my email to the job with a general message on Facebook a week later. Since the day I came out, I have received, I dunno, I would guess over a hundred emails, posts, texts, messages, phone calls, gifts, cards and letters from people in my life. The messages were loving, complimentary, protective, and just plain beautiful. Shifting from shame and fear to this celebration has been the most moving event of my life. And it took over 50 years to get here.

My wish is that everyone who has sent me such powerful, affirming words receives the same groundswell in their lives. My therapist said it was like going to my own funeral. I think it was better because, well, I'm still alive.

Some stuff was hard to hear because it was just so sweet and nice, and frankly, I felt unworthy. Since the hormone replacement therapy, I usually don't cry at sad movies or any sad stuff at all. I used to. Instead, now I am at such a level of happiness that when I get more happy, I don't know where to put it and it squirts out my eyes. That's happened a lot since that Good Friday.

I went to work two days later, on Easter Sunday. And it was a little awkward. I usually run to work, but I didn't this shift because I had all the food with me for our Easter meal, so I drove. I came in wearing eye liner, lip stain (thank you Mel), and mascara. A firefighter new to our station was looking very uncomfortable. I said, "Hey thanks for making coffee," as I poured myself a cup. He said,"You're welcome. How was your Saturday?" He was still avoiding eye contact. I took a sip of my coffee, paused and replied, "Pretty good... now that I'm a girl." And he broke up laughing and so did I and it was all good. And so it has remained.

I remain overwhelmed and unworthy of the awesome love bestowed upon me by everyone. Well almost everyone... I told Sarah yesterday that I am grateful for this person who despises me, as well. It is good to know how brave almost every one is and how kind almost everyone is. If it wasn't for this one person, I wouldn't have seen the contrast. So, thank you to him! It is like a pinch of cayenne pepper in a ginger snap cookie recipe. And for that spice I am very grateful.