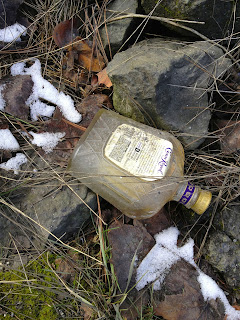 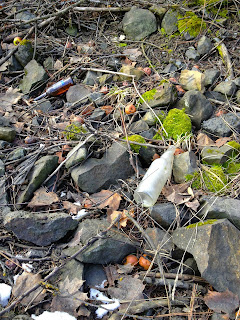 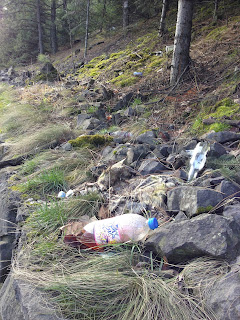 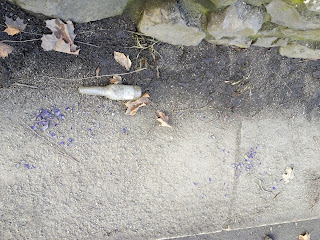 There are three ways down the the hill. None of them are great. My least favorite is to head down Bernard which turns into Grove and depending on which fork you take, Ben Garnett or Stevens. The sidewalks end or shrink down to inches. Cars bomb up the hill for fear of losing momentum I guess. It has really turned into a dump, as well.

I imagine that revelers speeding back home from partying Downtown toss their empties in this convenient location. You have to admit, it is more of an upscale detritus.

I love Spokane, obviously. The reason for this blog is to share with others what a great place Spokane is. So, this is hard for me to say. But, here goes:

Spokane has really become a more dirty, more rough town in the last year or so. If you only get around in a car, the only reason you may agree with me is that you read about the almost daily shootings in the paper. If you walk or ride a bike, you've seen it (and smelled it).

Howard Street Downtown used to be a favorite route for me, but its decline has been swift and undeniable. The map store now is a convenience/beer store with the colorful characters that come with such an enterprise. Spokane Shaver? RIP. The Blue Spark's clientele now look like they just came from the Mayfair. Youthful panhandlers are now full-on and some of them are delving into the pedestrian hassling biz, just for kicks. Closer to the park, things are still OK. Boo Radley's, Atticus, Mizuna and The Steelhead are still holding the line.

Been spit on (albeit accidentally) by a youth who was practicing spitting in front of Riverpark Square.  This is a skill which apparently young Spokanites take a lot of pride in. Downtown is where one showcases this talent.

Shooting, stabbings, shit your pants, blah, blah, blah, every day. It is only February, folks. Summer is usually when things really get going in Spokane. When it heats up, hold onto your hats!

Does anyone have any idea of what has happened to our town? I think the obvious answer is that I have become a cranky old man.
Posted by EvilElf at 9:26 AM 4 comments:

What I have been doing 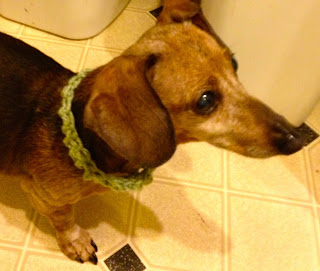 No ice fishing, lots of running, some union stuff, biking to work, working, and crocheting Daphne some bling.
Posted by EvilElf at 6:12 AM No comments: 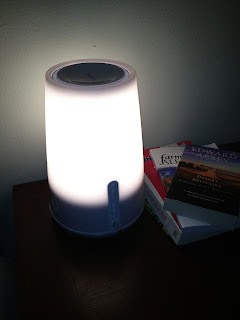 These next couple months, if I were wealthy, would be the months I would point the private jet south and vacate Spokane. It's that late-winter/early-spring weather and lack of light that seem to kick me in the head every year. A few years ago, I built the sauna to help out during this time, and it's been nice. This year, I tried some new tactics and techniques.  They seem to have really made a difference. Here's a product that I would recommend.

The Philips wake-up light is a $75 gizmo that, according to perhaps apocryphal Internet reviews, does as good a job as expensive light therapy lamps to combat the winter onslaught. The concept is fairly simple. If you want to get up at 6 a.m., the light starts to come on at 5:30 and gradually increases to full illumination at 6. Then the light stays on, and you have a traditional alarm,  radio or the sound of chirping birds. I opt for the chirping birds.

After I bought this, I realized I probably should have consulted Sarah first. But, as luck would have it, she had been thinking of us getting one as well.

The light inside the dome is halogen. I have been slowly getting us switched over to LEDs, all over the house. However, the halogen light seems to have a sunshine like quality to it - a very warm color. So, no plans to swap it out.

I can say that this winter I seem to have more energy and a better outlook compared to other years. Sarah says she feels the same way. Placebo effect? Maybe. I'll take it.