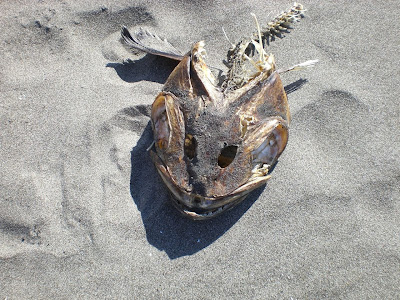 Took a great trip down the coast to San Francisco and back up through Sacramento and the interior of Oregon. My family and I had a great time.

Used to be that going to places like Eugene or SF would make me think about moving there. Not anymore. Instead, this trip has renewed my belief that Spokane is a great place to live.

Every town in Oregon and CA that we visited had dedicated bike lanes and most had plenty of bicyclists on them. With gasoline costing $4.80 per gallon (NoCal), it's no wonder.

California was hot - really hot - pushing 100 in the city. It was also very smoky from all the fires. Lake Shasta is almost dry and there isn't much snow left on Mt. Shasta. I've never seen more people in the Bay Area. It is packed. One local writer stated that San Francisco is now just a playground for the Uber-Rich. There's not much of a middle-class there anymore because of the high cost of housing. There are plenty of street people, however.

Having spent my youth in this area, I don't think it would be possible to have the kind of outdoor, neighborhood and cultural experiences that were there in the 60s and 70s. When you have the richest one-percent owning over 50% of the stuff in the world, the Bay Area is all bought up. For sure, the economics of this disparity even effects the housing market here in Spokane.

Spokane is a great place, with great people and a great future. It is truly good to be back!
Posted by EvilElf at 11:00 AM