A couple of years ago, I bought one of these telescoping fruit pickers. 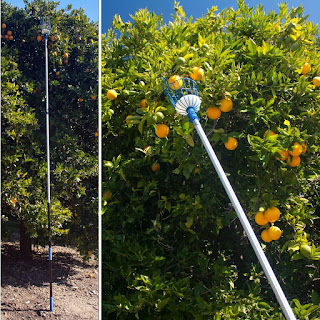 So much of the fruit in our prune tree was inaccessible and having one of these eliminated the need to climb up and down a ladder, and kept overripe fruit from being squished into the sidewalk and street.

This September, we had a harvest of about 100 pounds of really nice Italian prunes. Dried some and ate a bunch right away. So good! There’s also five gallons of wine and another five gallons of plum/ginger/hopped melomel fermenting downstairs.

After walking past so many apple trees this year with fruit rotting underfoot, I resolved to contact neighbors to see if I could use my fruit picker to pick some of their apples before they too were wasted. If I remember correctly, my friend John had done a similar thing with abandoned apple trees he had found around town.

A hallmark of apple trees in Spokane is that, if you don't spray them with chemicals, they are bound to be badly damaged from apple maggots. They can really look quite gnarly, However, they still have juice in them. And where there is juice, there is always the potential for fermentation. 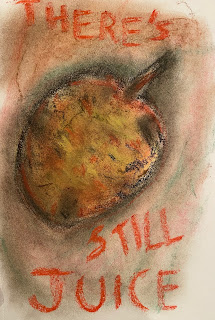 For most of my life, I have been a person who is a little shy (I know some of you will find that hard to believe), and have never been an overly sociable sort. And now being an out trans person, I know I can make some people feel uncomfortable. But, damn it, I wanted apples!

I utilized my Nextdoor app on my phone. Hitherto, I had only used it to post things like “I found a can of beans in an intersection. Did anyone lose a can of beans?” or “I am thinking of thatching my roof with thatch brought up from my lawn. Does anyone have any suggestions?” You know, “conversation starters.” For the first time, I had an actual request:

Hi, if you have an unsprayed apple tree (aka wormy) that you would like to have picked before the fruit hits the ground, please let me know. I bought a very small cider press and want to give it a whirl. Thanks!

The response was almost instantaneous. I received invite after invite. I settled on those neighbors closest to me. Many were within walking distance. One very kind neighbor said that she was at her daughter’s place in Idaho and would bring me back some apples. She did. About one-hundred pounds of some very beautiful apples and some gorgeous plums. So very kind!

Sometimes the apples that I picked were plentiful and beautiful. Sometimes they were beautiful but not so plentiful. Other times there were just a few almost perfect apples on the tree. Sometimes, the apples were too far gone to use. But, no matter what the tree was like, I met so many wonderful neighbors! I had great conversations with them. I stepped out of my comfort zone and really enjoyed their company. Now that I am retired, like a lot of people these days, my social interactions are pretty limited and mostly over Zoom. While picking, I kept my distance as we chatted and, thanks to my awesome new hearing aids, I could hear our conversations! I also had my buff around my neck ready to pull up over my nose and mouth just in case.

My son Aidan and I weighed the apples, and they came in at just over two-hundred pounds. According to what I have read, it takes 80 pounds of pressed apples to make five gallons of cider.

Now on to the pressing matters!

Last month I bought a small cider press (1.6 gallons). I searched all over town to find one and there were none to be had. I spent $65 for one online. The plan was to use it to press the Italian prunes from our trees. I did and it was a mess! I finally just ran the plums through the blender and made fermentables out of that.

So, along with my plum picker, this little press was crying out to be used.

Sarah and I have made cider before at a friend’s home. One of the crucial pieces of equipment is an apple shredder or chunker. When you press apples, you don't usually press the whole apple. It's the chunks (pomace) that get pressed. Again, there were no chunkers to be had in town so I looked to buy one online. They were all over $100 and it was going to take a very long time to get one. So I had to improvise.

On the morning of the cider making, Aidan and Natalie came over and we went through all the apples, got rid of some of the more rotten ones and the ones that had been chewed up by squirrels. We then washed all the apples with a very mild very watered-down solution of detergent. Then the apples were rinsed off and we moved them into the garage. 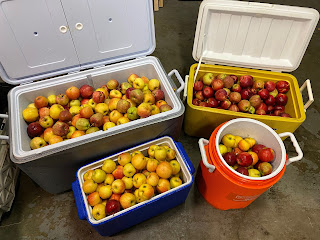 It was raining so hard that day! My newly-placed rain barrels (another project) filled up fast. So, with the rain, we had to move the whole operation indoors. We moved the cars out of the garage. Gave the mess a good sweep and set up our operation.

We put up a screen and had The Cult of Chucky playing in the background for a good Halloween vibe. 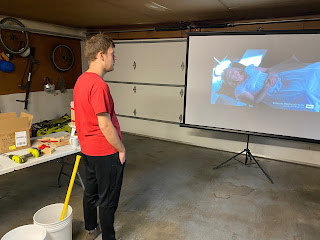 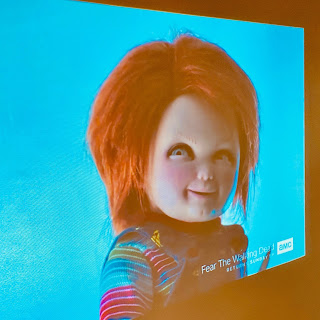 We couldn't really follow what was going on, but we enjoyed the voice work of Brad Dourif as Chucky (his daughter is in the movie too. Like Aidan says, she has her dad’s eyebrows).

We then decided to put Dune on instead. I haven't seen that movie in a couple of years. And then I remembered that Brad Dourif is in this movie, as well. He played Piter De Vries, the mentat for the Harkonnens.

Ike and Aidan, when they were little, wanted to be Harkonnens for Halloween. We talked them out of it.

Apples were quartered. Really bad pieces were thrown into the compostable bin. 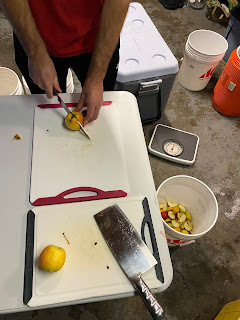 Quartered apples were placed into a bucket until the bucket was about a third full. This was the improvised apple chunker. A sanitized sledge hammer was used to churn these apples in the bucket. The apples were further demolished by using a drill attachment used for mixing drywall mud. It had been sanitized as well. This made an OK slurry of apple juice, finely chunked apples and some remaining quartered apples.

The slurry was dumped into the press. The press has a mesh bag in it. There is a hole in the bottom of the mesh bag to allow the jack bolt to protrude through it. I had made a frame that the press was screwed into. This frame was clamped to the work table. 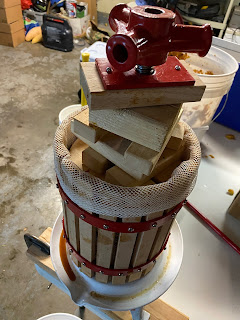 The juice ran into the bucket until it was almost full. I am guessing that each 1.6 gallon basket of apples rendered 3 cups of juice. Maybe. 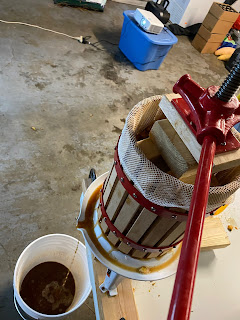 The juiced chunks were saved to make compost.

Out of the 200 pounds of apples pressed, we gathered about seven gallons of juice. This was a lot less than I expected. We should have pressed just under 15 gallons (if my math is correct). I believe the poor job of chunking contributed a lot to the shortage.

Five gallons of the juice is now fermenting as a straight-up cider. No sugar added. Just some yeast. The cider took off - fermenting really quickly.

The two gallons of juice that were left was mixed with some cinnamon, nutmeg, honey, sugar and dehydrated cranberries that have been in our cupboard for the last 10 years.

This wacky mix, which I guess one would call a cyser (usually a mix of honey and apple cider) did not take off. The specific gravity of it was really very high. It should be bubbling away! I put a heating mat under it. I even stuck it in the sauna for a bit. I pitched more yeast into it. I was puzzled. Then, at 3 a.m. this morning, almost a week later, it dawned on me - THE CRANBERRIES! I bet those suckers were loaded with preservatives. Hence why the big bag of them looked the same last week as they did ten years ago. No wonder there was no fermentation. Dang…

This morning, with Sarah’s help, I strained out the cranberries (and also removed the nutmeg and cinnamon). I don't know if this will be enough to get the mix going again. We will see!

Next year, my plan is to start earlier. I will try to get more apples. I have had many people since tell me about their trees they would also like to have picked. I am going to get a larger press. At least five gallons. They are not much more expensive than the 1.6 gallon version. But, I will have to remember to order one before autumn, because there seems to be a rush on them in September. Also, I really do need to get an apple chunker. I don't like having one tool that can only be used for one purpose. Maybe there are more things to do with an apple chunker. But, the lack of one was really the shortcoming in the whole operation. It is an absolute necessity.

The best part of this operation was getting to meet so many nice people and reconnect with so many neighbors. I kind of helped them by removing from their trees the wormy little suckers that they were going to have to pick up later. They really helped me by letting me have their apples. Over the last few months, between my recent retirement and the Covid restrictions, I have had really limited contact with others. It felt so good to talk (socially distant) with people who I had never met before. That was something I did all the time when I worked for the fire department. I miss that a lot.

The time with my family was so good too. The four of us - Sarah, Natalie, Aidan and I worked together in a common project. This will be a great memory! 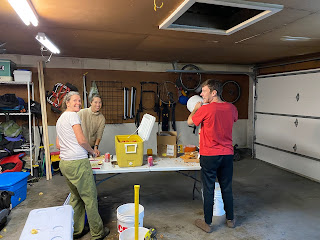 And hopefully, we can ring in a better year for everyone, with a glass of cider or two! 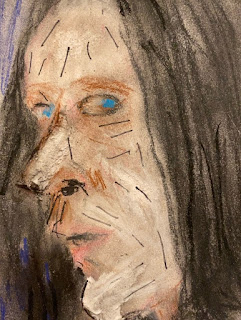 Brad Douriff also played Grima Wormtongue in the last two installments of The Lord of the Rings Trilogy - The Two Towers and The Return of the King.
Posted by EvilElf at 11:45 AM