Probably, the last bus I would get on. Really. 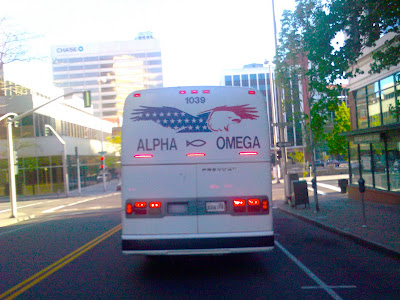 The Alpha and the Omega. The Beginning and the End. This motto on a bus as it hurdles its way up Howard is not a real confidence booster. I have a National Lampoon book around my mess of an office that features a montage of bus plunge stories like this:

In fact there are websites and news stories dedicated to the phenomenon of bus-plunge reporting.

Would you want to get on a bus that the driver supposes himself an eschatological operative of End-Times prophecy? What might an angel whisper in his ear as the bus wheels edge ever closer to the precipice, Cecil B. Demille cloud breaks illuminating the driver's upturned eyes. The praise music blares in his headset to stifle the voices, yet they must be obeyed...

The fish symbol. Don't get me wrong. I made a living working in ministry. I officiate at weddings, and have a graduate degree in subjects theologic. Yet, the fish symbol always serves as a warning label to me. The only time I have bought a crappy used car was from a family that couldn't profess enough how Christian they were, and they had multiple fish symbols to prove it. They knew the car had two cracked heads, but didn't tell me. Likewise, I think businesses use the fish symbol to create a level of trust that one might not afford a "secular" business. And when they take advantage of you, it might make you think twice about holding them accountable because "they are good people." I am all for people pursuing their religious beliefs as long as it doesn't imperil others. I am just saying that if you put a fish symbol on your bus thinking that it is going to make me trust you more, it isn't. In fact, it makes me trust you less, a whole lot less.

The over-the-top American iconography is just plain pandering. It almost borders on satire.

I wonder if this is where the group of proselytizing (sic) bible thumping picketers in Riverfront came from.
I must have been riding through there at 18 MPH, and suddenly this guy lunges out into my path (freaks me out!)
and whips his arm out, with a pamphlet, right into my face! Like I was REALLY going to grab that! (Not that I was the least bit interested in it anyways...)