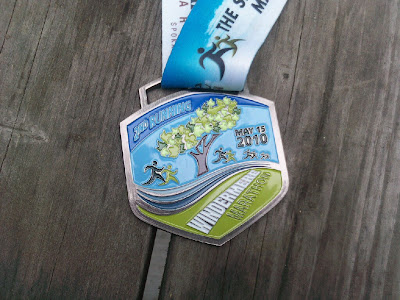 I had heard some bad reports of last year's Windermere Marathon, mostly along the lines that the course was not clearly laid out. Yes, pretty much the entire course was on the Centennial Trail, so it's pretty hard to screw that up, but apparently they did. It was the first year, though, and those kind of things might be expected.

Having trained a lot for the 50K RiverRun (awesome), Sarah and I decided to piggyback all those months of training and do the Windermere too. It was really expensive but they do bus you out to the starting at Post Falls and marathons are never cheap. We figured this was the second year, and they probably had it "dialed in" now. Beside, I really wanted to support this event. It would be great for the running community and great for our city.

Leaving from the arena, the bus ride out was perfect for the 7 am start. Everything seemed pretty flawless. There was a short starting delay to coordinate with the half-marathon which started at Mirabeau.

The first inkling that something was wrong was when my GPS watch showed that we were 0.7 miles into the race, but the race marker along the trail said "Mile One." It got worse. Eventually word surfaced at about Mile 23 that if you wanted to qualify for Boston you had to turn around at the finish line and run 0.8 back into the course. Sure enough, as I was .8 out from the finish there was a guy taking people's names and writing them into a notebook. Then after the names were written down and the 26.2 actually run, runners would walk or run back to the finish line (another .8) to get their medals. WTF?

I had no desire to qualify for Boston, but I did want to run a full marathon, so I crossed the finish line at 25.4 and then, as directed, ran back into oncoming traffic for .4 miles, turned around and crossed the finish line again for 26.2 - a true marathon's length. I sure as hell was not going to run 1.6 miles on top of what they were calling a marathon just so I could get my name written down in a notebook.

The Windermere Marathon is sitting in the fabled catbird seat. It goes along some of the most beautiful stretches of the Spokane River's Centennial Trail. Very little traffic control is needed. It passes through two states. The course is flat, so times will be fast. It takes place on the day of the Lilac Festival - a great evening of partying after the event. The weather this year was great. They have been given an awesome chance at creating a world class destination marathon.

Lots of great volunteers this year, nice shirts, beautiful medals, plenty of water stations, a great EMS response by the fire department and AMR as I saw IVs being started left and right during the finish (the second finish) on passed out runners.

Riverfront Park was a showcase for our city and for this race.

The organizers of the marathon had all this going for them and all we expected was that when we crossed the finish line, we had actually ran a marathon. How hard is that?
Posted by EvilElf at 8:19 AM

Wow, what an oddity for a running event to not have the distance measured correctly.

Gongrats on going the distance. Not doing so would have created a mental asterisk.

And since you're on a roll, Let's Climb a Mountain is 8 weeks away.

That should be "Congrats". Stupid fat fingers....

I googled Windermere Marathon because I was sure that someone else out there was as frustrated as I was about the race!

I emailed them tonight to request a refund of my entry fee since I paid for a marathon and they didn't deliver one. I bonked at mile 9 so the rest of the race pretty much sucked - but nothing was worse than crossing the finish line and being told by the announcer to run back to the Red Lion Hotel. There was nobody taking names and nobody directing me where to go. There was a little old lady crying at the finish line because she would have made it to Boston but she didn't hear anything about retracing her steps...For shame.

I had a co-worker who ran it last year and told me about the mile marker mistakes but I too thought they would have figured it out this year...