Okay, so I have been wondering how to blog about this and not sound like an ungrateful jerk. How to broach the subject...

It just so happens that the majority of my route to work now has bike lanes. I am talking about Howard Street. I have kind of an overall ambivalent take on bike lanes. I don't like being corralled into an area where I have to worry about people opening their car doors. Also, I don't like the idea that now I am no longer part of regular traffic - I am relegated to a kind of super sidewalk.

On the other hand, bike lanes are a visible sign that a community gives a shit about bicycling. The bike lanes on Howard are nice in that they actually take you a great distance, unlike the ones on 29th or Cascade. I believe, too, that bike lanes will get a large part of the population feeling that it is OK, maybe even safe, to ride on the street (in a bike lane). I was hopeful that these lanes would get a lot of cyclists off the sidewalks too. I think the jury is still out on that one.

I have to say, I have seen more people commuting on bikes now that there are lanes. So, I think I am good with bike lanes and sharrows and all the other bike infrastructure, after I do the calculus. Thanks to everybody who made these lanes a reality. Like so many recent good things in Spokane, these came about only with a big tide change in the city council and the mayor's office.

So my attitude toward bike lanes is not what I am feeling kind of sheepish talking about. There are two items which have left me feeling a little perplexed.

Item One. I was riding my bike to work one morning, proceeding up Howard. At the intersection with Boone there were about 10 people with walky-talkies. At least three total intersections were barricaded with multiple personnel guarding each intersection. Of course, I rode through. As I did, I worried that maybe the president was coming to town and I was now being targeted by the secret service. After work the next morning, there was the striping for the new bike lanes. Some of this striping has since been removed. 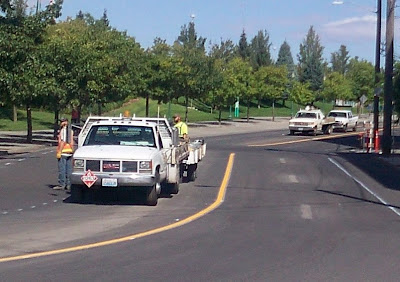 Then a week later, there were even more people - a lot of people doing the same thing between Riverfront Park and Boone on Howard. This time, I was told by one of the legions to ride on the sidewalk, so as to avoid messing up the striping. So, I did. I still feel like I need to go to confession. 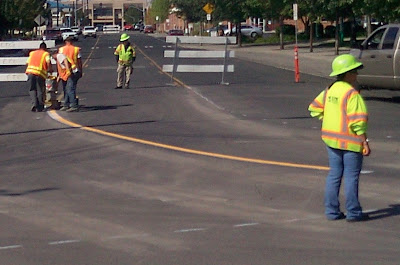 All to say, the overkill of people working on Howard for the striping seemed bizarre. Now, I know that there are (as D. Rumsfeld would say) things I know that I don't know. I am often on the receiving end of the question: "Why do two big fire trucks and an ambulance show up for medical emergencies?" It's a pretty simple answer when you are in the know, but perplexing when you are not. So I was thinking maybe I am just ignorant about the whole striping process. Yet, I couldn't help myself from wondering, in a fine conspiracy moment, if maybe the anti-bicycle forces actually made this project more expensive, more inconvenient and more of a visual spectacle than it needed to be, in order to negatively sway public opinion. I decided that was ridiculous.

Then one day I rode my bike downtown on Howard - no bike lanes yet. The next day - POOF - bike lanes. WTF? How did they do this part so fast, with all the parking spaces and traffic to contend with? So there's item number one.

Item Two. The shape of the bicyclist's head on the reflective road painting seems familiar to me. What are THEY trying to say about bicyclists? 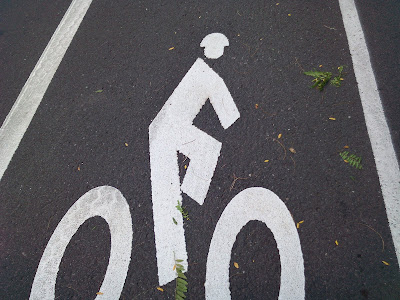 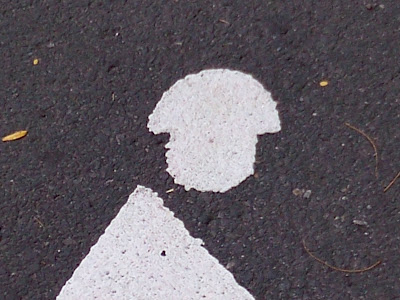