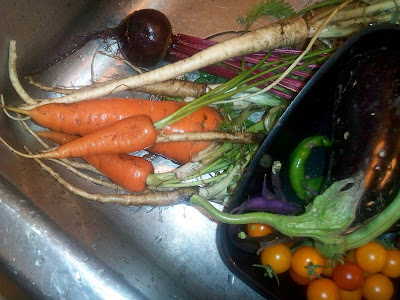 Cooked these up for dinner the other night. All from the garden. I am really liking the new raised beds. It's a lot easier to see the food. Also, morning slug patrol has been a quicker task. The salsify has been hit pretty hard by the little bastards.

When I am picking slugs out of the garden, my thoughts turn to the recent incarnation of the Dune series, written by George Herbert's son. In these, the Tleilaxu have bred a hybrid of a pig and a slug called a "slig." Delicious! Also, they are used to dispose of discarded characters, kind of like how Bricktop used pigs in Snatch.

I would raise sligs if the city and reality allowed it.
Posted by EvilElf at 7:39 AM