A great ride to work yesterday. Noticed they were getting ready to stripe bike lanes from Mission to Boone. About 10 workers manning the street blockades. An unbelievable fuss for the little bit of work. I still like the way Mother Nature did it a couple of winters ago: 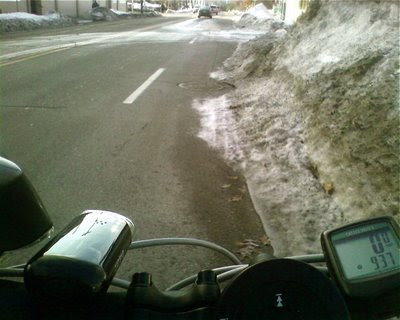 Had a busy night last night. Lots of fires going on and medical calls. Strangely enough, we had some apparati respond to the working fire on S Riverton by driving right past our station at 2 am or so this morning. Couldn't really figure that one out, as we didn't go on it at all. I suppose the dispatch computer (HAL 2000) knows what it is doing. Still, one after the other the calls kept coming in, and I threw in the towel at 5:30 and stayed up and did a report and made some potato pancakes out of the mashed potatoes we had yesterday. Got two down my gullet when off we went on another fire. Needless to say, it was a sleepy ride home this morning on new bike lanes. A nice surprise was that I could cross Howard at Second, this after a couple of weeks of detouring progressively to the east.

Later, Sarah and I walked down to watch a band at Pig Out. Lazer Wolf did a very nice job.

I like looking at all the people eating at Pig Out. I think there would be a really neat photo essay in that. However, we hardly ever eat there. Sitting on the ground, next to a garbage can shoveling food in as fast as possible has never been that enticing. So, we walked up to the Flour Mill and ate at Queen of Sheba, the Ethiopian Restaurant. I had met the owner months ago on a call at Clinker Daggers before her restaurant opened, and it's taken us this long to eat there. AWESOME FOOD! Great vegetarian and meaty things. I took this picture after we started eating. I should have done one before. It was a thing of beauty. 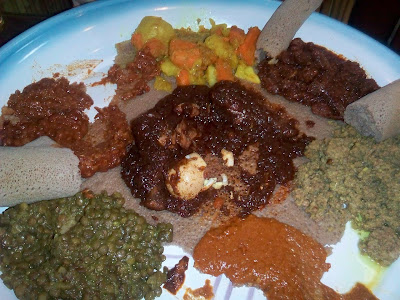 On the way home, leftovers in hand, we walked past the old YMCA Building and Sarah stated how much she was going to miss the beauty of the building. She was kidding.

One thing we thought about was how, no matter what the final outcome (I marginally think they are doing the right thing by removing it), most people will probably get on with their lives and forget about the whole controversy, and only see what remains.

I have to admit, every time I walk by the American Pavilion, with its crappy rides and its crumbling potential, I think of Steve Corker and how he fought so hard to prevent the Pacific Science Center from opening a museum there (on their dime) and thumbed his nose at the money, education and opportunity it would have brought to Riverfront Park. He thought losing the carny reject rides would be a blow to the community. Also, I remember Councilman Corker saying that nobody would travel to Spokane to visit a science center. I think he later regretted his stance and that his speechmaking was responsible for stopping the science center. Ooops. But, I bet hardly anybody else but Sarah and I remember that. Right?

On that note (sleep-deprived) I wonder if the city sought to charge every adult an extra dollar a day to improve the city, how many people would miss that dollar? There would be a lambasting in the media. Talk radio would go through the non-gardened roof. The majority would say they couldn't afford it and would vote against it. But if somehow it happened, if it snuck through, how many people would even notice the 1.5 lattes they were no longer "affording" each week? If all that money went to make Spokane better, they might notice that and so would businesses and investors. Maybe.

I am not advocating this. Mine is a fairly ridiculous idea. I am just saying sometimes our politicians should realize that whatever decision they make, it will probably not be remembered by the small (unnoticeable?) effect it has on our pocket book today but by the larger effect it has on the future of our city and our kids - providing the decision is not a colossal waste of money. Hardly anyone remembers the debates, the action or the political fallout, they just see what is in front of their face today, a glimpse of the future and what is right or wrong with it.

"My property taxes doubled this year!"
"Really? How much were you paying before and how much are you paying now?"
And you know the person is thinking that they just have a feeling, or someone told them, that their taxes doubled but they can't say that. All they can honestly say is, "I don't know."

All to say, I get real preachy and goofy when I am tired. I make funny typing mistakes too.

On a religious note... I don't know when this happened, but God isn't so gaga about us any longer, at least according to these Pig Out messianic minstrels: "Where is the love?" I ask. "Hey, maybe he's just not that into you. I mean he cares for you, but, maybe you're moving too fast."

Do I seem desperate? Needy?
Posted by EvilElf at 3:20 PM